I have to start this debunking with a disclaimer: I can’t independently confirm that this is an actual quote.  Here’s the quote in question: 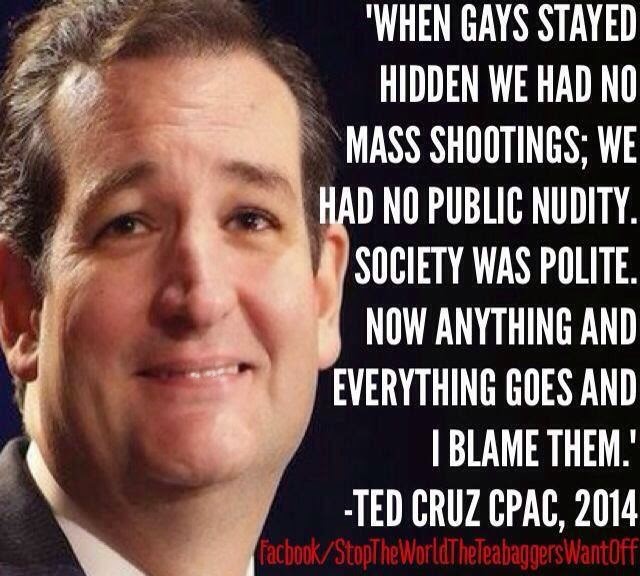 First off, this comes from an anti-GOP group that alleges the quote came from last year’s CPAC gathering.  I went through Cruz’s entire speech and there are no references to gays at all.  Now, that doesn’t mean he couldn’t have made the statement to a small group on the side, or in a personal conversation; I just can’t prove it.

So, IF the quote is accurate, let’s proceed.

What we have here is a classic case of Logical Fallacy; it’s a fairly simple one that works best on simple people.

“Because B followed A, A must have caused B.”

This is a basic, Logic 101 five-alarm fallacy.  All of Cruz’s “B” statements have scores of other possible causes, probably a combination of them.  To assert that gays coming out of the closet is the root cause, well, that’s just asinine.

This is really just a case of scapegoating.  The aging, angry, white men of the GOP desperately wish it were still the pre-60s, where well-to-do white men ruled the country, people of color knew their place, women had dinner ready and did as they were told and the gays, well, there were no gays, as far as anyone could tell.  It was an idyllic time… as long as you were a well-to-do straight white male.

Now in the past, they’ve demonized African-Americans and Hispanics, but then they got their asses kicked in the 2008 and 2012 general elections.  Our country is what, 40-45% people of color now?  That’s a formidable voting bloc.  But gays?  That’s 6-10% of the population.  It’s significant, but nowhere near the numbers of other minorities.

And boy, can you ever scare people with tales of gay debauchery, so much so that if you put forth scenarios featuring child predators, graphic sexual information in schools, and lewd acts going on at every corner, you can get people to vote for a party who services the rich at the expense of the very voters who elected them.   A scapegoat is exactly what you need to distract the people you’re trying to screw, especially if you can do it under the guise of religion.

I put forth that it’s the suppression of gays that is the root cause of all this long-standing gay fear.  Until gays started coming out to friends and family in recent years, the only time middle-America saw gays were during news clips of gay pride parades.  These parades are marked by great enthusiasm and flamboyance, so that’s what people associated with “the gay lifestyle.”  They think it’s all about hordes of Freddie Mercury clones wearing ass-less chaps.

Except that’s not really it.  That’s what comes out when a person’s not allowed to be himself, out in public, other than once a year for a couple of hours.  Maybe it’s all that suppression that makes people go “over the top,” during their big moment.

So maybe if gays hadn’t been forced to stay hidden all these years, middle-Americans might have seen that they’re basically just like everyone else.  They go to work and come home and go out to eat and cut the grass and pay their taxes.  On the surface, you’d never really see anything out of the ordinary.  There would have been no need for extravagant displays of pride, no more so that in an average St. Paddy’s Day parade.

It can also explain some of the gun violence and mass shootings Ted mentioned.  Maybe if some of these kids hadn’t been beaten up every week and called “faggot” by the jocks and popular kids, they might not have felt the need to bring an automatic weapon to school and slaughter everyone in the cafeteria.

Now this is just an idea of mine; I could be full of shit.  We’ll never know.

So why do these Fox “News” and GOP types use such weak logical constructions?  Because they work when used on their base.   Look they’ve said it themselves… 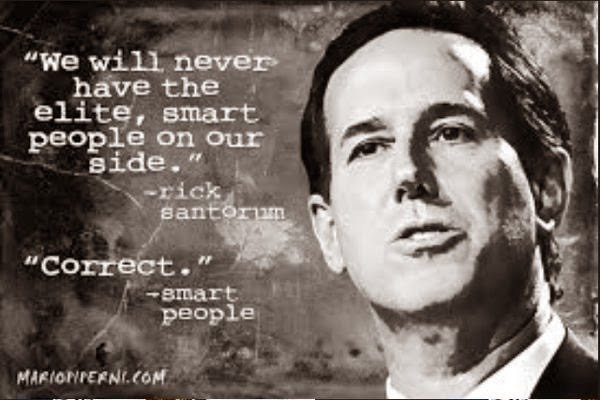 Remember, this is also the same party whose Texas delegation added a plank to their platform that was against teaching critical thinking skills in high school.

The Republicans don’t want people educated; they want them pliable.  That way, weak-ass logical assertions like Cruz’s gain traction, and allow the GOP to continue use issues like religion to rig this country’s economics to ensure the rich stay rich and everyone else stays distracted with “moral” issues.

But you don’t have to take my word on that…