In June of 2013, I wrote a couple of posts listing the concerts I’ve attended.  The next month, I did a third installment, but my progress stopped there, so because I really don’t have anything else burning up my brain pan, I figured I’d go through another chunk.  During this time period, I was still managing a record store and living in Cleveland.

3/18/89 – Cinderella/Winger/Bulletboys, Richfield Coliseum, Long Winter tour. (16.00 comped)  I went to see this one solely because my girlfriend at the time was really into Cinderella.  I hardly knew their music at the time, but I like them a lot better now.  I got backstage passes, but the gf was too star-struck to even speak to them.

6/16/89 – Meat Loaf, Nautica Soundstage, Cleveland.  Blind Before I Stop tour.  ($11.00)  This was the first show in Cleveland I ever had to pay for, but this was The Loaf!  Totally worth it.  (At eleven bucks??  LOL  That won’t even get you parking any more.)  But because Meat Loaf didn’t have a record deal at that time, there were no freebies to be had.

This was my first time seeing Meat Loaf, so I was really excited.  He’d been my favorite singer for years.  Nautica was an outdoor pavilion right on Lake Erie, so it was a pretty cool venue.  This was the only time I was ever there.

The Loaf, of course, was awesome, as we was every other time I saw him.

7/9/89 – Albert Collins, Peabody’s Down Under, Cold Snap tour.  (guest listed) I’d just seen Albert a year and a half before, but he was well worth seeing again.  I got to stand belly-up to the stage, so there were great opportunities for picture-taking. 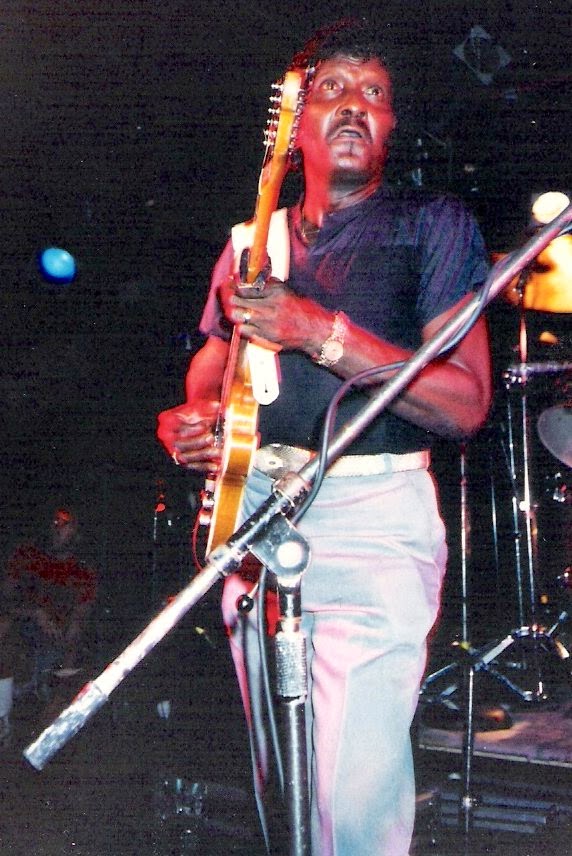 Albert Collins, Master of the Telecaster

9/27/89 – The Rolling Stones/Living Colour, Cleveland Stadium, Steel Wheels tour. ($28.50 comped)  Another big one.  I guess they had a lot of seats to fill in Cleveland Stadium… (yes, THAT Cleveland Stadium, the cavernous antiquated field where the Browns and Indians played.)  I was offered 4 freebies, so my first call was to my boss, who was a huge Stones fan.  I took along another couple of store managers as well.

It was a great show, of course, culminating with Keef playing the guitar solo to Sympathy for the Devil, from waaaaay up at the top of the stage backdrop.

Also ended up leaning on and swaying to Ruby Tuesday with a cute girl in the row behind me.  I got her number but she was from about an hour east of town, which made her geographically unsuitable for pursuit.

10/7/89 – Texas, Peabody’s Down Under, Southside tour. (guest listed) Went with a bunch of other managers from our stores.  Texas is a Scottish band, with a twangy, pop sound and a female lead singer.  Got to meet them all backstage, and they were very nice.  (Probably because hardly anyone (but us) knew who they were.

December 1989, Joan Jett, Akron Civic Center, Up Your Alley tour. This was the only other show I had to pay for during my Cleveland years.  I’d just seen Joan the year before as an opening act, but this was the first time I got to see her headline.

So I couldn’t get a freebie but I DID have backstage passes, which led to one of my favorite experiences with Joan.  When she came down into the room, she recognized me and came right over me.  I then got to introduce my assistant manager to her, like we were old friends.

March 1990 – Expose, Peabody’s Down Under, touring on their 2nd album. (Guest listed.)  Expose was a female dance/pop trio.  It wasn’t really my kind of music, but hey, I got offered the tickets and had nothing better to do.  Besides, they were seriously cute.  I got to hang out with them all a couple of years later, when I was working at our record retailer’s home office.

4/10/90 – Alannah Myles, Peabody’s Down Under, touring on self-titled debut album. (comped)  I had a huge crush on Alannah Myles and she was tearing it up with her song, “Black Velvet.”  She also had some harder rocking songs too, so I was only too happy to see her in person.

When I went to see Expose, I didn’t get there early enough, so I ended up about 20 feet back from the stage.  I didn’t want to make that mistake again, so this time I got there early and grabbed a spot right at the front of the stage.  Man, it’s a whole different world seeing a show from up that close.  Plus, I got a drumstick from the opening act.  (The Questionaires.) 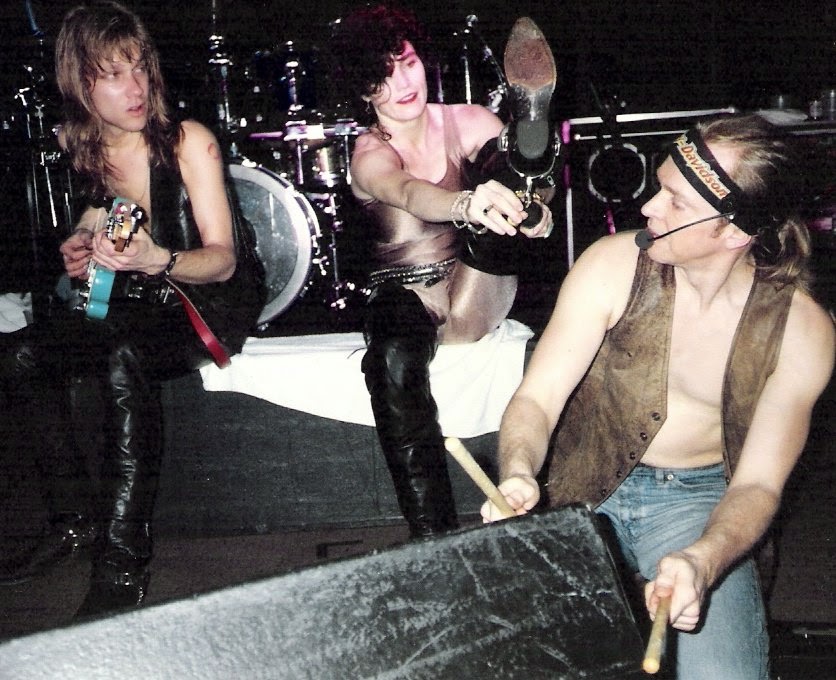 The drummer was playing a solo on all the equipment, including the stagefront monitors, right smack in front of me.  I probably could have reached up and spun Alannah’s spur from where I was.

That was the last concert I saw in Cleveland.  But the end of 1990, I’d moved up to Albany NY, to pursue a job with the company home office.  It would take two more years of managing stores before I made the jump from nametag-wearing grunt to office dude.

The game wasn’t quite the same for store managers.  The label people didn’t need to butter us up as much as they did with the product buyers in the office.  But still, if you made your connections, they could still hook a brother up.

7/5/91 – AC/DC w/ LA Guns, Knickerbocker Arena, Albany, Razor’s Edge tour. ($20.50, comped).  Not bad for a first show in Albany.  Had to go by myself though.  It sucked not having a crew any more.  I probably should have asked one of the strippers I was hanging around with.  But once again, AC/DC was great.  You pretty much know what you’re going to get.

8/29/91 – ZZ Top w/ Extreme, Saratoga Performing Arts Center (aka SPAC), Recycler tour. ($22.50)  SPAC was an outdoor pavilion, like Blossom Music Center in Cleveland and Merriweather Post Pavilion here in Baltimore.  ZZ Top had another great, effects-laden show, including their moving sidewalk gag.  That’s where they both turn and start walking sideways across the stage, but don’t actually go anywhere.  It’s surprising at first until you realize they have a moving conveyor belt going across the front of the stage.

11/24/91 – Joan Jett w/ The Four Horsemen, Saratoga Winners, Notorious tour. (comped)  Got to meet Joan again, but because it had been a couple of years since I last saw her, I never brought up that we’d met before.  So the fact that she was so incredibly friendly with me and my assistant manager just meant that’s the way she is. "Keep treating people right, and you’ll be in the Rock and Roll Hall of Fame… eventually…"

12/5/91 – The Moody Blues, Paramount Theater, Springfield Mass, Legend of a Band tour. ($25.00 comped)  By this time, I had finally made it into the home office.  Late in the day one evening, the music buyers asked a bunch of us if we wanted to go see the Moody Blues.  The show was out of state, but they got the Polygram label guy to drive us all in a van.  We ended up going through a terrible snowstorm, and barely made it to the show alive, let alone on time.

3/8/92 – Koko Taylor, Lonnie Brooks, Katie Webster, Lil Ed and Elvin Bishop, The Egg, Albany NY, Alligator 25th Anniversary tour.  This was a big blues show featuring artist from my favorite blues label, Alligator Records.  I probably could have gotten free tickets myself, but my mentor, Vinnie, basically had an open invitation.  He reserved the entire first two rows.  I had my parents come into town for the show and we got to meet all the acts.  I wrote all about that, here.

6/9/92 – Melissa Etheridge, Palace Theater, Never Enough tour. (comped) I went with my mentor Vinnie, and his girlfriend.  Great show; she really sang her ass off.  Got to meet her backstage too, and this was the first time I ever froze up with a rock star.  At the last minute, I decided that what I wanted to tell her was too hokey, and just shut my yap.

But, I got ended up getting a wife out of the deal.  Vinnie’s girlfriend enjoyed my company so much, recommended me to her friend at work.  One blind date later, we were off on a 5-year run of fun and misery.  (You can probably guess as to the proportion of each.)

8/2/92 – George Thorogood w/ Little Feat, SPAC, Boogie People tour. ($14.50 comped)  This was my first concert with Future Ex.  We got backstage passes, but George was out the door and in the car before we ever got back there.  Great show though.  Future Ex’s comment after watching George tear up the stage: “He’s wrapped pretty tight, huh?”

To be continued… maybe.
Posted by bluzdude at 8:19 PM