My apologies for being late posting this week.  I spent Monday and Tuesday in a mad scramble to make the best of a bad situation.  Here’s what happened.

As you may know, it’s been cold as Ann Coulter’s heart around here… Monday morning it was 3 degrees.  I know, people on the plains or in the upper Midwest get that all the time, but Baltimore rarely gets that mind-numbingly cold.

I was concerned about how my 2002 Chrysler Concorde would hold up; I think this is the coldest it’s been since I got it in 2010, and it still has its original battery.  But when I went out to the car Monday morning, it started up just fine.  (It started up OK on Sunday as well.)

About a mile into my trek to the subway, the oil light came on.  It had never done that before.  I figured the sensors must be cold and the oil extra sludgy, so I continued on my way.  I only had another 2 miles to go and hell, back in the day, I used to drive my car with the oil light on, for months.  (Granted, I was both stupid and broke back then.  I don’t mess around like that anymore.)

I thought I’d get to the subway, go to work, and then afterwards, swing by the Jiffy Lube that was right on my way home.

Right outside the turnoff to the subway lot, the car just stopped running.  I had just made a left at the light (for which I luckily didn’t have to stop).  Realizing I was right on the doorstep, so to speak, I figured I’d use the car’s momentum to glide down to the turn-in and just ease into a parking space.

What I didn’t figure was that I would have to do it without benefit of either power steering or power brakes.  So at the dead end, where I’d have to make another left into the lot, I had to wrestle the wheel around like I was cornering in an aircraft carrier.  I still wasn’t braking yet, because I wanted to keep up my forward momentum.

Then I had one last maneuver where I had to make essentially 3 rights and come to rest in an open parking spot.  That’s when it got tough, because I had practically no brakes.  I really had to stand on the pedal, so not to careen into the curb.  But somehow I managed to get it come to rest in a parking space.

Once at work, I called to arrange to have the car towed to my local garage, which is about a half mile from my apartment.  They’re a little pricy, but it’s walking distance.  Not having to bug someone for a ride is an important factor to me.

It’s funny; when you’re illegally parked, they can tow your car in a heartbeat.  But if you want your car towed, they insist on your being there.  So I asked my boss if I could work the rest of the day from home, (she said yes, because she’s a very understanding boss), so I went to meet the tow truck back at my car.

As I mentioned, the tow truck guy got my car scooped up and onto the flatbed in no time at all, and then dropped the both of us at the garage.  I left the key with the mechanics, and set about walking home.

First stop, however, was the local Chinese food place.  It was lunchtime, and “brotha’s gotta eat.”  Besides, there’s nothing better than hot and sour soup when you’ve been standing out in frozen temperatures for a while.

The garage called me later that afternoon, and told me that the “usual suspects,” the battery and alternator, were fine.  They’d have to tear into it a little deeper… which was gonna cost me.

Sigh.  But fine.  What else was I going to do?  He said it would take about 3 more hours, by which time they’d be closing, so I should probably expect to hear from them on Tuesday morning.  Because we were expecting about 5” of snow overnight, it was already likely I was going to work from home anyway, to this sealed the deal.

So, the next morning, he called with the bad news… the oil pump was broke, and with no oil in the engine, it tied right up and was kaput.  Only way to fix was to replace the entire engine, which would run between $5000 and $6000.  Given that I only spent $3300 on the entire car, I decided that it was now time for a new car.

All I had to do next was figure out which of the bazillion cars out there was the one I wanted.  I had no clue, so I just started chopping wood.  Googled used car dealers and started browsing stock.

Pretty soon, I came across a model I’d never heard of, the Chrysler 200, which was the size, body-type and price that I was looking for.  There were a bunch of them around; I just had to find the one with the right combination.

Remember when I told you about test driving a Chevy Malibu and a Ford Fusion for my job as a Fleet Manager?  That experience really helped me, because I had a pretty good basis of comparison.  I knew I didn’t fit in the Fusion very well, so I looked up the headroom stats for it, so I could make sure whichever car I chose would have a little more.  I can’t stand mashing my head into the ceiling every time I hit a bump in the road.

I almost went for a brand new model, but unfortunately, the new model had about 2” less headroom than the 2013.  Kinda bummed me out.  The 2015 had a much better electronics package.

You know, this was the first time I’d needed to buy a car from a dealership since 2004 and my, how times have changed.  Before, I’d have to go to a dealership and just look around until I found something I liked, all the while fending off over-eager salesmen.

Now, I could troll online through dealership search engines, choosing all the criteria I wanted, evaluate all the options, and find a car that fit my needs.  All without having to get out of my jammies.

Anyway, I settled on a car from a dealership that was only about 15 minutes away.  I IM’d the dealership inquiring about the car, they called me back and we set up an appointment for that afternoon.  Because I was without transport, I called Pinky to give me a ride, which she was nice enough to do.

They had the car ready for me when we got there, so we began the test drive immediately.  It was a nice ride.  I was very pleased at the prospect of finally having a car with some modern amenities.  Although one of my favorite amenities was very old fashioned. 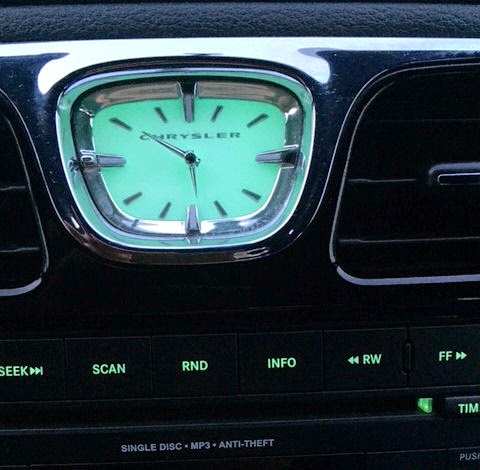 Finally!  A clock I can figure out how to adjust for time changes!

The test drive was the easy part.  After that, it took another two and a half goddamned hours to get my paperwork done!  I guess some things never change…

The worst part was the home stretch, where the finance guy tried desperately to get me to buy a bunch of add-on benefits and warranties.  There were 4 different combination packages with stuff like extended bumper-to-bumper warranties, GAP coverage, paint and seat treatments, and Lord knows what else.

When I declined all that stuff, the finance guy went into Incredulousness Overdrive.  The whole time, I’m thinking, “This guy wouldn’t be pushing me so hard, if there wasn’t a lot more in it for THEM than there was for ME.”

You know, the last time I held the line with a sales guy like this, it was over hoses for my new washing machine.  And after bravely insisting my hoses were perfectly fine, they sprung a leak as soon as I hooked them up.  You’d think I’d have learned.

Anyway, we got the deal done and I think I got a pretty good financing rate.  I didn’t go into the week expecting to add 4 years of car payments, but that’s the way things go.  This morning, I went back to the shop to get all my crap out of the Concorde… especially my snow brush and scraper.  Got the plates off and contacted a junk yard to come pick it up.  I’ll even get a couple of Benjamins out of it.

It just sucks that I just put 4 new tires on it last freakin’ month.  That one hurts.  And before you ask, no, they won’t fit the new car.  But whatevs… shit happens.

But at least after this shit, I got me a new car! 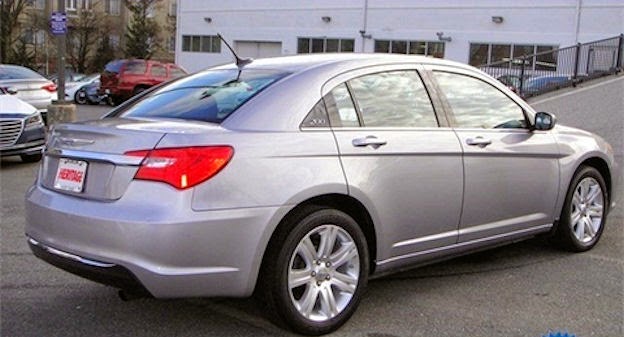