Busy as a Bachelor

I know I have it pretty good.  I mean, I complain and kvetch about being busy, like most people, but I know I don’t have nearly the kind of burden that others do.  All I have to do is look out for myself.

That really removes a lot of stress from my life.

So it’s funny when every so often, I think, “Wow, I was really busy this weekend,” or “I got so much done,” and then I have to add a colliery… “Well, yeah, for ME…”

I thought I had one of those busy Saturdays last week.  I had to go do some shopping to solve some household issues.

First of all, during a seasonal cleaning, (“seasonal” meaning I clean once during football season, and then again during baseball season), I learned that the vacuum cleaner that Temporary Girlfriend left me in 2014 had stopped working.  There was still suction but the roller brush no longer spun.  I never liked that vac in the first place, so I figured I’d go pick up a new one.

I used to have an old classic metal Hoover; the kind with the bag that you have to replace (which I rarely did, until it was ready to burst).  But she made me toss it and use her multi-attachment suction hose thingy.  It was OK in principle, but I think it was on its last legs.  It was also deafeningly loud.

In addition, I needed to replace the broken screw that secured the toilet seat to the toilet.  It had snapped clean off.  Someone, (who totally wasn’t me,) was standing on the toilet seat, to pour soapy water over the top of my shower stall, when the seat slid and snapped the screw. 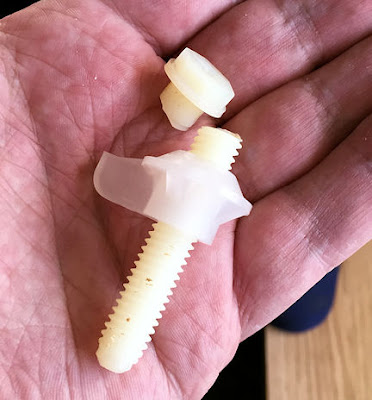 Heaven forbid I’m ever using the toilet for its intended purpose (as opposed to as a step stool… or would that be a stool step?), and slide off onto the floor.

And while I’m in the plumbing department, I thought I’d take a look at the shower heads.  A year or two back, my landlord had low-flow shower heads installed in all the units.  I can’t stand it.  Every morning my showers are totally uninspiring.  The shower stream is so feeble; it feels like I’m getting peed on, instead of getting my clean on.

I meant to pick up a new bathroom rug to go in front of the toilet, but I didn’t like the ones they had.  My current one is perfectly functional, but I had a bit of a laundering mishap. 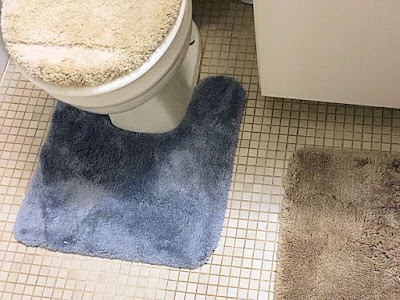 They used to match.

I washed all the bathmats together, along with the dark blue ones I have in the other bathroom.  Oops.  Don't know why only the one turned.  First time in 30+ years of doing laundry that I ever had a color mishap.  Time to start a new streak.

Anyway, the shopping trip was successful.  And I was able to find just the screws, so I didn’t have to buy a whole new toilet seat.

So when I came home, I had some chores to do.

First, I replaced the toilet seat screw and tightened up the other one.  Good to go!

I replaced the shower head, with a very simple 3-way spray number.  And when I fired it up, the water came out with a nice “woooosh!”  I may never have to clean the shower glass again.  Morning showers have been much more bracing, ever since. 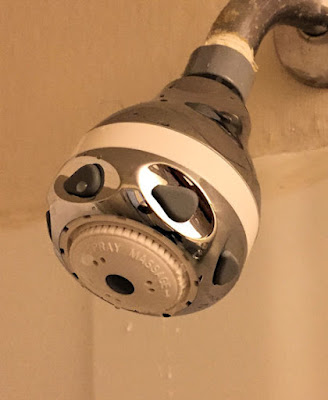 When I took off the old one, I could see a lot of grit collected in the in-flow screen.  I’m sure that’s what was killing the water flow.  I could have cleaned it out and put it back on, but: A) I had already opened the package for the new one, and B) even when it was new, the water flow was still pretty piddly.

Then it was time to get serious… I had to assemble my new vacuum cleaner.  It was easy, though, no thanks to the directions, which were conveniently printed on the box flap.  All I had to do was attach the handle to the base, using two screws. 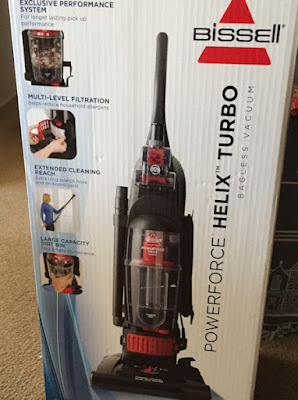 This might have been a job for my power screwdriver, but alas, it was not charged.  (Damned thing loses its charge in no time.  I really have to plan for using it, so to charge it up the night before.)  But I had a ratchet screwdriver, and that did the trick.  I probably would have had to use it anyway, because the screws didn’t go in very easily.  I had to bear down on them.  (Yes, Rik, the ratchet was set on forward, not reverse!)

Five years ago, I would have spent the next couple days in misery, from the hives I’d get from putting that much pressure on the heel of my palm.  But my Delayed Pressure Urticaria seems to have cleared up and is no longer a factor. [knocks wood]  When I woke up in the middle of the night, I felt a little sting in my palm, but by the time I got up in the morning, it was gone. So if that kind of hard pressure on a concentrated area didn’t create hives, I don’t know what will.  Halle-freakin-luiah… only took 14 years.

Tool use: Ratchet screwdriver.  Ding!  1 bonus point.  (If I’d used my power screwdriver, I’d get 2 bonus points… it’s an extra point any time I use a power tool.  Ups the danger / fuckup factor.)

Anyway, after putting it together, I had to take the vacuum out for a spin, right?  This unit must have some serious suction… the canister was filled past the fill line with one vacuuming.  I wonder if there’s any fuzz even left in my carpet. 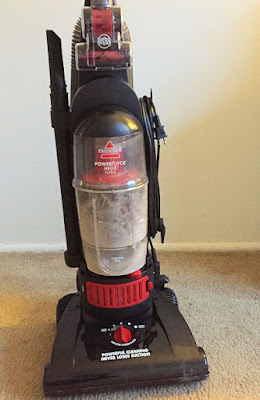 So that was my “busy day;” I changed a screw, put on a shower head, attached the handle to a vacuum, and swept the floor.  All told, it about 35 minutes of labor, about half of which was the vacuuming.  Whew, I was exhausted!  And that’s why I laugh…

To conserve energy, I waited until this past weekend to try out the attachments.  But they work.  I successfully used the suction brush attachment to clean the dust from my mini-blinds.  I also used the furniture attachment to suction off my couch and throw pillows.  I don’t think that’s ever been done.  (I guarantee it hadn’t been done by ME.)

Had a bit of a problem using the edging attachment to clean out the tracks on my sliding glass door… it kept sucking in the sheer curtains.  I felt like I was in a Lucy sketch or something.

In marginally related grown-up news, my Mom sent me a box of spices this week.  We were talking about seasoning roasted potatoes and I mentioned I’d picked up some rosemary to go on them.  Mom asked if I had any sage.  I didn’t.  Next thing I know, there’s a box of spices being delivered. 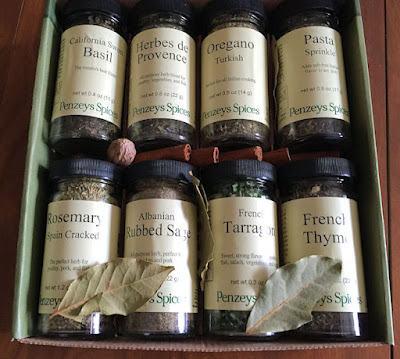 So now I have to figure out what to use them on. I emailed her right away.

I took a shot at using some of them with swordfish, on Saturday.  I looked up on the internet to see what would go best and came away with oregano, rosemary, and thyme.  I also added black pepper, butter, and lemon juice.

Just to see how much of a difference there’d be, I did one piece with the new spices and the other like I always did before; with just lemon pepper and butter.  (I did add the lemon juice.) 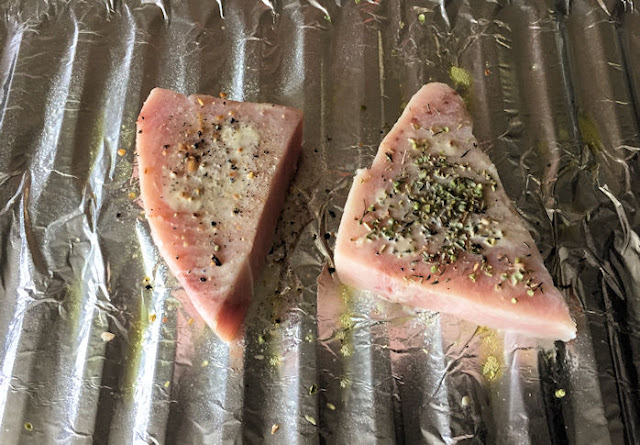 Picture is before cooking.  Forgot to take one after cooking... I scarfed them up too quickly.

Both were good, but the newly spiced piece was much better.  Funny, though… it didn’t just taste better, it was tenderer and juicier.  I cooked them both together in the broiler and both were the same thickness; I don’t see how one could be drier than the other. But it was.  Maybe the spices have some insulating qualities I don’t know about.  I’ll just have to try again.

In the spice box, they also had some loose things… cinnamon sticks, bay leaves, and a couple of nutmeg nuts.  I understand I have to use a cheese grater to shave the nutmeg nuts, which means I’ll have to go back to the store and buy a cheese grater.

Because they’re so small, I’ll have to be careful not to grate my knuckles.  I can totally see that happening.  Maybe I can use some pliers to hold the nutmeg when I grate it, the next time I make pasta.