You're Not the Boss of Me

I’ve mentioned before, over the life of this blog, that my company has been up for sale.  I don’t think I ever mentioned, but the sale closed last November.  The merging of the two companies is ongoing.

At the moment, it looks like I get to keep my job, which is a great thing.  After facing it a couple times before, I’m scared witless of getting laid off and having to job-search in this day and age.  The couple times that happened to me in the past pretty much ruined my life.  It took me many years to catch up.

So, I’m thrilled I can keep doing what I do.  Of course, there are other big changes afoot, with the disbanding of the department in which I’ve been working for the past 10 years.  I would have gladly worked for my prior boss for as long as she’d have me.  We “got” each other.

Two Mondays ago, after a couple months of not knowing how the chips were going to fall, I heard from one of the head guys from out of state, who told me I could continue to manage our fleet of company cars, but that I’d be reporting to our real estate group, under Carlos.

I was fine with it.  In fact, my old boss mentioned this as a possibility several weeks before, so it wasn’t a surprise.  And I knew Carlos… he was a part of our site security team, which used to meet monthly to discuss issues dealing with the facility.  He seemed like a nice guy… always said hi to me in the hallways.

After the call, I waited all day to hear from my new boss, but no one ever contacted me.  So at the end of the day, I went down to Carlos’s office to stick my head in and say hi.  We chatted for a couple of minutes; just small talk about the department; then I left.  I figured they’d let me know what they wanted from me soon enough.

But I didn’t hear from anyone for the rest of the week.

In the meantime, I had another phone conversation with the out of state department head, who asked me to have Carlos evaluate both our organization’s contracts with our fleet vendor.  (I.E. the company that provides our fleet cars and services.)

That Friday, I passed Carlos in the hall again and gave him a heads-up that I’d be sending over the contracts, as soon as I received them.  Then last Monday, I did so.

Later Monday afternoon, a guy walked past my area and said, “Hey, I hear you’re joining our department!”

I didn’t recognize him, but we exchanged pleasantries.  Then he said he got the contracts and would look them over.
What the…

I asked my co-worker, “Who was that guy I was just talking to?” 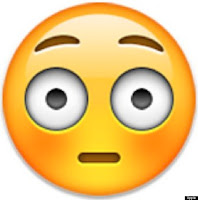 Fuck.  Me.  This whole time I’ve been talking to the wrong fuckin' guy.

I described the guy I had been talking to and learned he was another guy from the same department.

Yes, both guys are members of our site security team, BUT, they always call into the meetings; they never show up in person.  And to make matters worse, because they work from home so often, they all use the same office.  And none the offices have names on them anymore.

There are also hundreds of people in the building who I see all the time, with whom I have even had conversations, without ever being formally introduced.

It’s no wonder I didn’t know who’s who.

Now my only question is whether they ever noticed I didn’t really know who they were.

I figure I’d better wait a couple of months before I tell them this story.  I’d rather have a short track record of being competent before letting them know what a dipstick they have in their department.
Posted by bluzdude at 7:20 AM