Saturday night, Bluz Sister texted me with the best news I’ve heard all year, about the passing of Supreme Court Justice Antonin Scalia.

Now, I don’t wish death on anyone, but I sure won’t miss his crusty ass on the Supreme Court bench.  Every position this guy has ever taken is the opposite of what I’d like to see done.  He claimed to be a “Constitutional Originalist,” meaning the document should be read literally and that’s it.  It’s a perfectly valid stance if your goal is to find for rich, land-owing white men at the expense of, well, everyone else.

So I wrote her back “Gonna be one hellacious fight in the Senate.  Bet the GOP tries to run out the clock, no matter who he nominates… They will take no prisoners to make sure that no liberal judge replaces Scalia.”

That’s the big thing, this time around.  When Kagan and Sotomayor were nominated, it was to replace liberal judges.  They were just holding serve.  This nomination could switch the balance of power on the Supreme Court.  All those 5-4 decisions could start going the other way.

Then on Sunday morning, I read this quote in the paper, from Mitch McConnell: “The American People should have a voice in the selection of their next Supreme Court justice.  Therefore, this vacancy should not be filled until we have a new president.”

I’ve seen a lot of dumb political quotes before, but this one reaches a new level.  I knew exactly how I was going to respond and practically had my blog post written in my head.  Then I saw this meme on Facebook this afternoon, which pretty much says exactly what I was going to say: 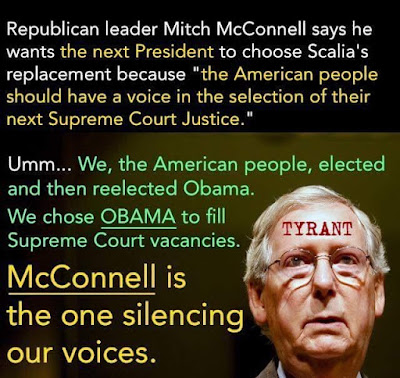 Obviously, we who voted for Barack Obama knew damn well that appointing seats to the Supreme Court would be one of his most important duties.  And I’m sure there are a lot of people who thought the same thing and trusted their vote to Obama.  Twice.  And he won by a greater popular margin in both elections than George W Bush ever did, when Bush claimed he had a mandate from the people.

But I’m sure McConnell wasn’t intending to reach anyone with an IQ over 95 with that statement; it was for Fox “News” viewers, the place where their “facts” aren’t facts anywhere but on their network.

With the Republicans in control of the Senate, they are in a position to stall the next nomination indefinitely, even into the next presidential term, if the election doesn’t go their way.

I’d like to say they could be pressured into granting a vote if enough people got involved, but I don’t think that’s likely.  They don’t give a fuck what anyone thinks, aside from their rich business donors.  And the rich business donors will want a conservative, pro-business-at-all-costs court, so not to be forced into doing anything which could cost them money, like cleaning up after environmental messes they make or paying a living wage.

The last two appointments were bumpy, but they were a piece of cake compared to this next one.  This one is going to be all out war.  It’s going to be fought everywhere; in Congress, in the press, over social media, over regular media.  I am not looking forward to the misinformation that will be disseminated.

I mean, why would it be any different than what’s going on now?  Did you hear what Ted Cruz said on Meet the Press this weekend?

“If liberals are so confident that the American people want unlimited abortion on demand, want religious liberty torn down, want the Second Amendment taken away, want veteran’s memorials torn down, want the crosses and Stars of David sandblasted off the tombstones of our fallen veterans, then go and make the case to the people.”

Well, that would be quite alarming if any of it were true.  What he’s doing there is twisting a series of liberal positions into something absurd and then casting it as what liberals really want.  He’s practically creating a parody of what liberals want and pretending it’s real.  Let’s analyze.

“American people want unlimited abortion on demand…”
Nope, practically no one is in favor of that.  Most people don’t want to see late term abortions, barring some tragic health threat to the mother or fetus.  And people are overwhelmingly against having one group of people tell another how to live their lives.

No, wait, that’s not exactly true… Republicans are totally for that.  I should rephrase.  People are overwhelmingly against anyone else telling them how to live their lives.

“…want religious liberty torn down…”
Wrong.  The GOP uses “religious liberty” as palatable terminology to describe discriminating against people who aren’t like them, or don’t believe as they do.  And in this country, you can’t do that.  What they really mean is for the rights of Christians to do whatever they think the Bible tells them to do.  Believe me, if Jews, Muslims, Buddhists or anyone else felt their beliefs were keeping them from serving Christians, then we’d see how fast the concept of “religious liberty” is dismissed.

What liberals want is for no one to be able to use their religion as means to persecute or infringe on the rights of others.

“…want the Second Amendment taken away…”
Another gross over-simplification.  For some reason, conservatives are just fine with modifying every other concept and amendment in the Constitution but seem to think that the Second Amendment is absolute.  It’s a complete exaggeration of the most common liberal positions.

Wanting full background checks and keeping known terrorists from legally buying guns, limits on high-capacity magazines and armor-piercing bullets isn’t taking the Second Amendment away… it’s self-preservation of society… It’s claiming the right not to be killed because some idiot thinks you look funny.

“…want veteran’s memorials torn down, want the crosses and stars of David sandblasted off the tombstones of our fallen veterans…”

Wrong again.  It’s not a liberal position to tear down veteran’s memorials.  However, he’s probably referring to the occasional fight over a giant cross on government land, used as a veteran’s memorial.  Again, it’s the hubris of insisting that Christianity is a one-size-fits-all blanket that covers the USA.  Men and women of many religions fought and died for their country.  Either include them all or make it a secular tribute.  The soldiers’ service to their country transcends any particular religion.

Likewise, no one is looking to remove religious insignias from tombstones.  The only controversy I’ve seen on the matter is where certain options aren’t offered.  People who have died in the service of their country should be able to have any logo they want on their fucking headstone, whether it’s a cross, a Star of David, or the Flying Spaghetti Monster.

But that’s a long way from forcibly removing religious emblems from headstones.  It’s just a logical bait and switch.  Or in other words, lying.

“…then go and make the case to the people.”

Make what case, Ted?  This fiction you call the liberal position?  It doesn’t exist; it’s propagated by you and the other GOP dipshits, who twist words and ideas into something that will sufficiently frighten low-information voters into voting against their financial self-interest.

In other words, business as usual.