Yesterday I went to see the new Tina Fey movie, Whiskey Tango Foxtrot, (which is NATO-alphabet for “What the Fuck?”)

I’m on a roll here… that’s two Tina Fey movies in 3 months.  Granted, she is a goddess to me, but it’s not like I go see every one of her movies. 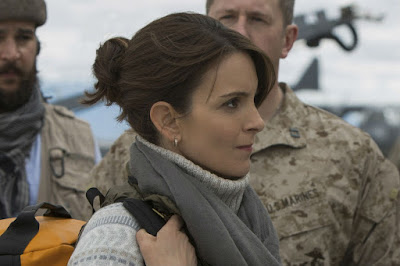 I can do without the dippy rom-coms.  But put her in an R-rated movie, and I’m there.  "Sisters" was a riot; pure mayhem.  “WTF” was funny, but not in the same way.

The movie is loosely based on a book written by Kim Baker, who was a print journalist, thrust into a war correspondent’s role in the war in Afghanistan.  She hangs out in Kabul with the rest of the war reporters in their own little community/nightclub.

It was more like an episodic war correspondents’ story, with lots of snappy banter.  And swear words.  Lots and lots of swear words.  And one thing I learned: you can take the most vulgar and obscene lines of dialogue, and if they’re spoken with a Scottish accent, they become endearing and exponentially funnier.

Once on the ground, in the “Kabubble,” she meets Amazonian beauty Margot Robbie, playing an English war correspondent, who becomes her friend and advisor. 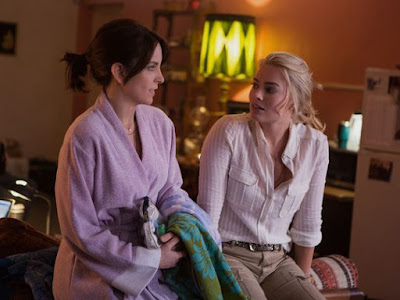 The young and lovely Ms. Robbie’s fame is about to explode once the movie Suicide Squad comes out, in which she plays The Joker’s protégé, Harley Quinn.

Kim also meets Englishman Martin Freeman playing a Scottish photojournalist, and provider of all the Scottish vulgarity.  He is best known (to me) for playing Bilbo Baggins in the last three Hobbit movies.

One of the consistent criticisms I read in the reviews was that the movie doesn’t quite have a point.  It’s not a pro or anti-war movie, it’s not an out and out comedy, it’s not a feminist vehicle or any other catch-all bucket.  But I don’t see where it has to be.  It touches all those areas while it just tells the story of what happens to a sheltered writer when she is thrust out of her comfort zone.

Anyway, I liked it a great deal.  It made me wish Tina Fey would go back to TV and do a comedy series for HBO, or some other pay-cable outlet.  I mean, I absolutely loved 30 Rock, but I’d really love to see what she could do without a network Standards and Practices department monitoring every line.

I’ve written before that I think she’s drop-dead gorgeous, but it’s really more than that.  One of the reasons I find her so appealing is that she’s so sharp.  She writes, funny, biting satire, the kind I can only aspire to creating myself.  It took me awhile to figure that out, though.

I first saw where most people did: doing Weekend Update on Saturday Night Live.  I remember seeing her and thinking, “Hey, she’s seriously cute!  And hilarious, too.”

So I started paying more attention to her bits.  (Material bits, not naughty bits!)  I always liked to follow stars that weren’t obvious; who were not the usual bombshells.

What I didn’t know at the time was that she wasn’t just doing that one role, she was the head writer.  I suppose I might have picked that up quicker if I’d watched SNL more regularly.

When she took that experience and spun it into 30 Rock, I tried it out right away.  And, believe it or not, I wasn’t impressed.  It didn’t seem to be any more than Alec Baldwin being a meddling boss, Tracy Morgan being weird and a bunch of misfit comedy writers.  I saw the first episode or two and kind of dropped it.

In retrospect, I understand why.  It takes a while for a new series to hit its stride.  I ended up reading a lot of positive press in later months and gave it another shot in the 2nd season.  So glad I did.  Suddenly it was a LOT tighter and snappier.

When I eventually began buying the season DVDs, I saw that it took until around the 8th episode of Season 1 before it started clicking.  And I began falling head over heels for Liz Lemon.

If there was one moment that locked it all down, it was this one… the famous “Night Cheese” bit.

It was a brilliant bit of Monty Python-esque absurdity. I loved that not only does she have a name for sitting on the couch at night, in a snuggie, eating cheese straight off the block, but she has a song for it.  AND, her boss knows the song.

I thought, “This is a world I want to hang out in every week.”

Plus, they figured out what to do with Alec Baldwin’s character; by setting him up as Liz’s friend and mentor, they gave him some of the best lines on TV:
Well, I could keep quoting dialogue lines for the rest of the post, but it’s getting late.

And that Night Cheese isn’t going to eat itself.