Tales from the Glassy Knoll

I had a glorious day on Saturday, playing Baltimore Ambassador to another visiting dignitary.  I had received an email from my long-time blog friend, Kernut the Blond, asking if she could take me up on an offer I once made.

Kernut writes a kind of life and travel blog, featuring lots of small towns, roadside attractions, and tales from the heartland.  I don’t remember how we came to start following each other’s blogs, but hers is a real pisser.

After living in California and making a living doing office work, Kernut decided to chuck it all, buy an RV, and ramble around the southwest and make do as she went.  She spent the last several years living in waterfront RV parks in Texas and Oklahoma, doing whatever kind of work she could find to keep herself afloat.  She documents all her adventures in her blog.  (It also includes an explanation of how her nickname came to be.)

I’ll say this, the woman is brave.  She faced an internal “put up or shut up” moment and went all in.

It was some time ago, I don’t remember the context, but I dropped a comment on her blog saying that if she ever found herself out this way, let me know and I’d take her out for crab cakes.

Then several weeks ago, I heard from Kernut, saying she would soon be coming to southeastern Pennsylvania, and wanted to get together for those crab cakes.

As you know, I love to meet other bloggers so immediately accepted her accepting my original invitation.

When the day drew near, I emailed her with a brief rundown of things I thought she might like to do, which included the Inner Harbor, the National Aquarium and a waterfront lunch.

She also had some ideas after a little Google research.  She wanted to go the “Top of the World” observation deck of Baltimore’s “World Trade Center,” and to go find what’s known as the “Seven-foot Knoll Lighthouse.”

The former was easy; the latter… that gave me a brief twinge of heartburn.  This area is flush with waterways.  The Patapsco River feeds the harbor area and there are all kinds of offshoots here, there and everywhere.  This lighthouse could be anywhere, including clear down on the Eastern Shore.

Then I Googled it myself.  Turns out, I can see the damned thing from my office building. 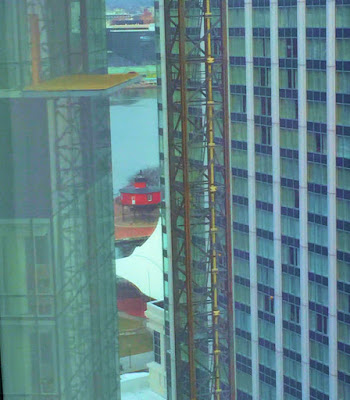 If you look to the left of the Marriott Waterfront, and the right of the Four Seasons construction, and just above the white Pier Six Pavilion roof, you can see a little red lighthouse.

I had no idea it was even a lighthouse.  In fact, I already had a picture of it, from when I went to see Boston at the Pier Six Pavilion two summers ago. 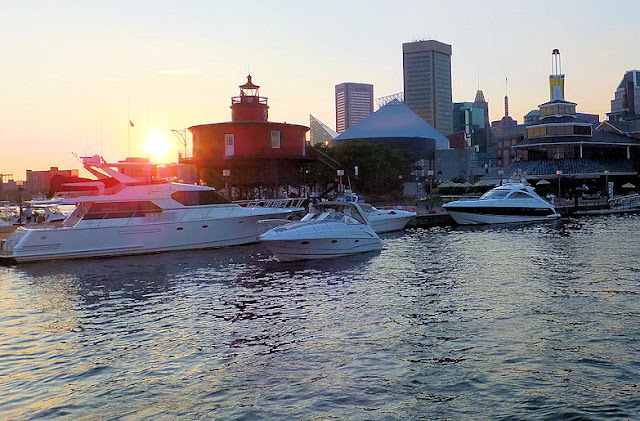 So it was perfect!  Everything we wanted to do was in about a 3-block area surrounding the Inner Harbor.

It’s always a bit nerve-wracking meeting someone I’ve only known online. I get so amped up wanting to make sure everything goes well and that I’m sufficiently entertaining.  Then when the time comes, I find myself relating a story, which inevitably reminds me of another story and next thing I know, I have a dozen stories all fighting to get out at the same time, leaving me jabbering like a monkey.  Sometimes I just have to force myself to STFU.

So, it was gorgeous out on Saturday and the flowering trees were in full bloom. 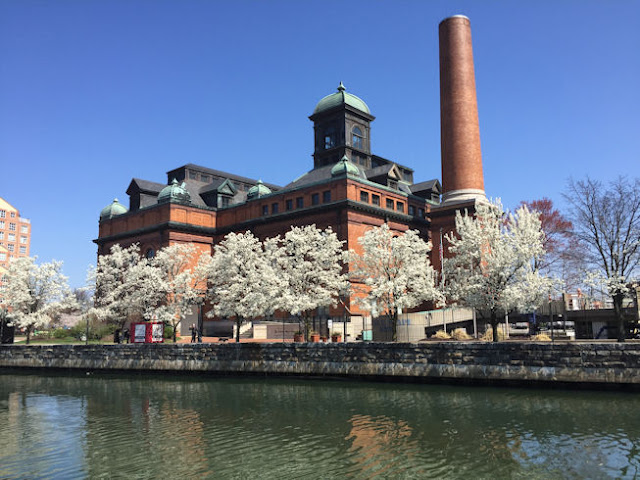 My theory is that those trees look so good because they’re right next to the water treatment plant.  I’m sure they’re well fertilized.

The harbor area was also setting up for a massive Festival of Lights which starts tonight and runs through the week, so we could see the preparations taking place. 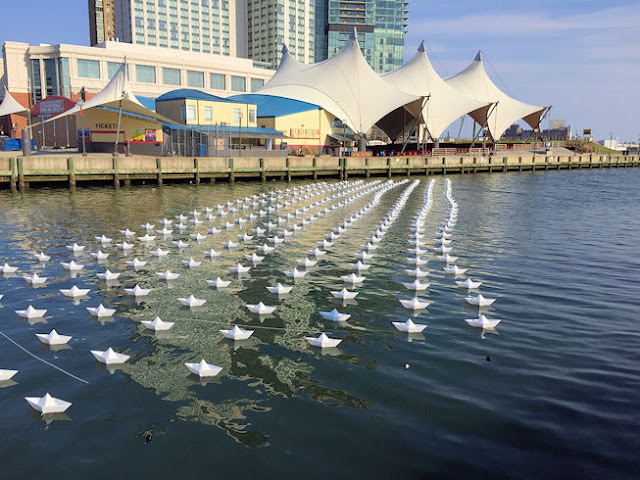 I’m assuming these will be all lit up, come nightfall.  (That’s Pier Six Pavilion in the background.)

We started our tour with the Seven-Foot Knoll lighthouse.  Built in 1856, it used to be out in the water at the mouth of the harbor but was moved to shore in 1988, to serve as a museum. 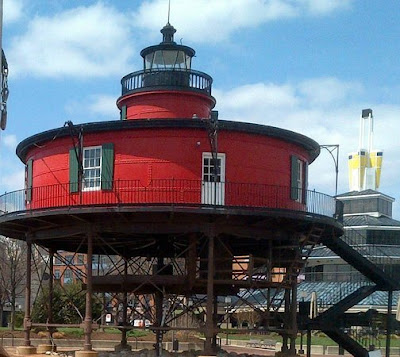 The National Aquarium tour was awesome, as usual.  We saw everything from happy turtles… 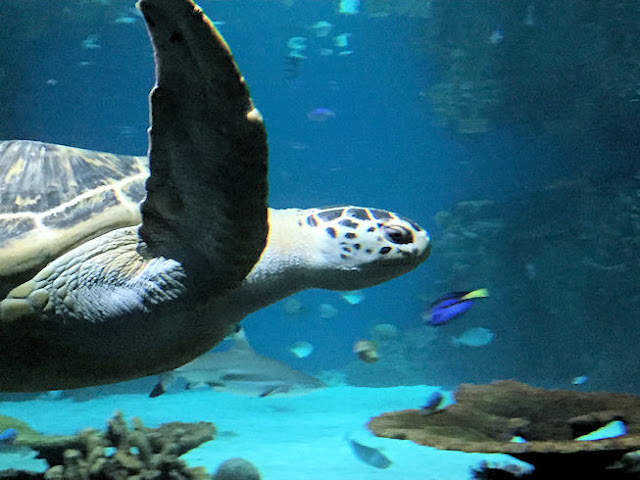 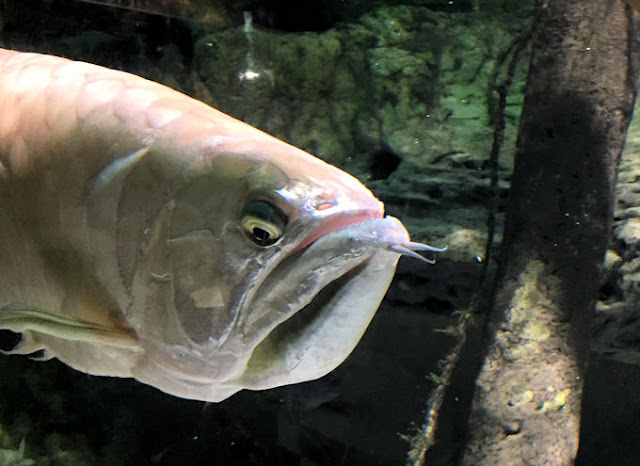 “Another day, another lap around this stupid tank…”

It takes a good couple of hours to get through the Aquarium, so by the time we were done, we were ready for a seat and a meal.  I picked the local McCormick and Schmick because it’s supposed to be good and it’s located right beside the lighthouse.

Kernut liked her crab cake; I was less than thrilled with my fish and chips.  The fish were more like marginally puffier Mrs. Paul’s fish sticks.  The calamari, however, was wonderful.

After eating, we walked up the pier to the “World Trade Center” and the "Top of the World" observation deck.  It’s a pretty lofty set of names for a mere 28-story building, but it’s a good place to take a look around Baltimore. 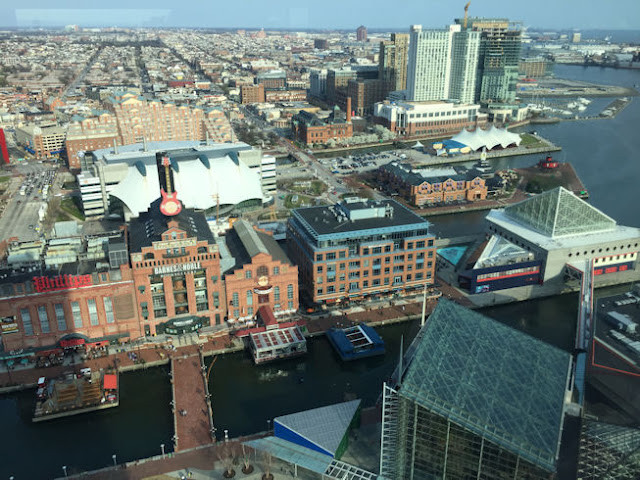 In this shot, you can see everywhere we’d been so far that day. Pyramid-looking buildings on the right are the Aquarium and you can see the little lighthouse between the “pyramid” and the Pier Six Pavilion.

After the high-level observing, we took a walk around the harbor to scope out some of the old, retired boats moored there.  You can buy tours of all of them, but we were pleasantly surprised by a visiting “tall ship,” the Stad Amsterdam.” 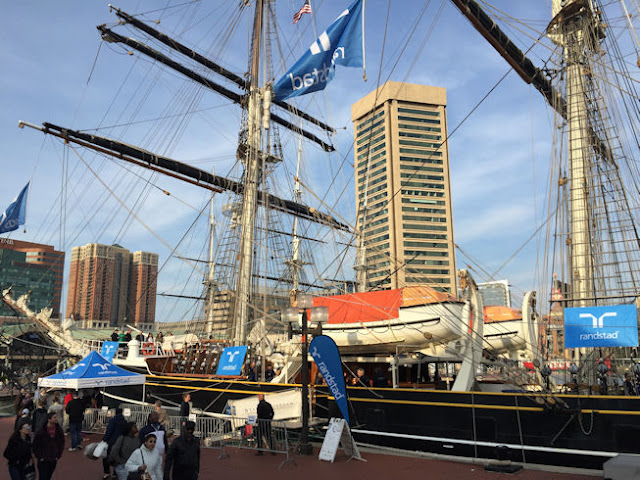 The Stad Amsterdam (with the “World Trade Center” directly behind it).

They were letting people look around the boat for free, so we had a walkabout.  It was pretty cool. 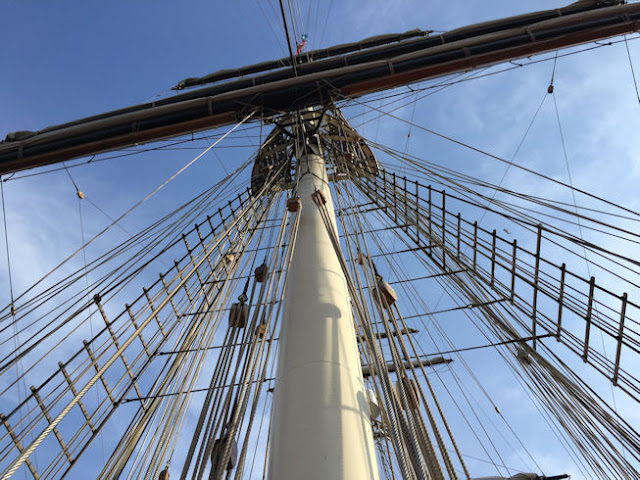 A look up one of the masts.

As we were wandering around onboard, a couple came up to us and asked if we’d take their picture for them, and in return, they’d take one of us.  So here we are. 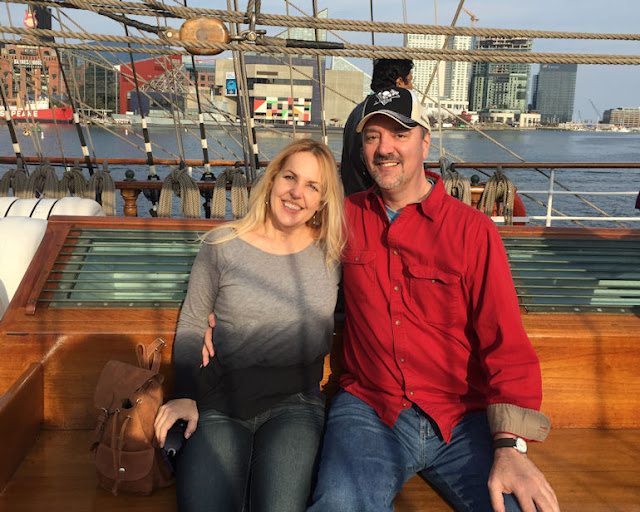 As you can see, I was a very lucky guy to be squiring around such a treasure.  She looked great… I, however, looked like an unmade bed.  When the hell did I get so rumply?

After the ship, we made our way back to the car; we pretty much had our fill of walking around by then.  We also wanted to get Kernut back on the road, so she could make it home, (or at least close), by dark.

All in all, I had a ball.  I just hope Kernut had a good enough of a time that I can tempt her to come back.  As a lover of kitsch, she’s just got to see HonFest.
Update:
Kernut has posted her version of her trip to Charm City. You can see it here:
http://kernut.com/bloggers-i-stalk/kernut-bluzdude-baltimore/
Posted by bluzdude at 7:18 PM