I spent about a half hour on the floor last night, laughing at “Modern Family.”  I get more consistent laugh-out-loud moments from this show than any other in recent years, save for maybe “30 Rock.”  And for me, it certainly doesn’t hurt that the yumminess quotient is off the charts.

But as you may have heard, last night’s episode touched off some controversy this week, because word was out that a storyline featured 2-year old Lily, adopted daughter of gay dads Cam and Mitchell, dropping an F-bomb at home and later at a wedding. 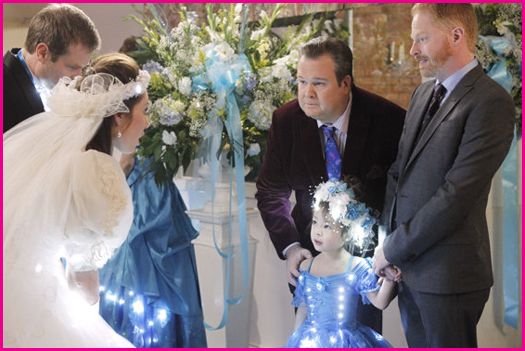 Now, knowing this show as I do, I was sure it would be presented tastefully and fit in with a relevant plot.  This is not a crass or vulgar show at all; for all the craziness of the three families, it nevertheless has a sweet, gooey center that always leaves you feeling good at the end.

So naturally, here come the conservatives to try to spoil the fun.  First, some 18-year old college student, that founded a “No Cussing Club” that claims 35,000 members, began making noise about getting the episode pulled.  He apparently formed this club in 2007 when he was 13.

Yeah, like we want 13-year olds (OR 18-year olds) dictating public standards.  (Although that might explain the continued popularity of “Two and a Half Men.”)

Later, the Parents Television Council got in on the act to condemn the episode, which was titled “Little Bo Bleep,” saying that they don’t want children exposed to that kind of language and emulating that behavior.

I had to laugh… like these PTC people are watching the show anyway… Modern Family features a gay family that acts like any other ordinary family.  That disqualifies it for them right there.  God forbid the children see this realistic portrayal and become infected with the gay.

Anyway, all this happened before the show even aired.  I was half tempted to write this rebuttal yesterday, but unlike any of these bloody do-gooder groups, I thought I’d wait to see the episode first and then write an informed opinion.

As in keeping with the show’s history, it presented this very real situation quite tastefully and reflected a problem parents have had across time and space.  What happens the first time your kid says something off-color?  And what happens when the kid says something at a formal event, like a wedding?  Parents, you’ve all been there, right?  Or at least you know you will be one day.

When filming the show, they had the little girl actually say “fudge,” so not to taint the little doll, and then bleeped the word and pixilated her mouth.

Eric Stonestreet, who plays Cam, said it best in a couple of tweets:

“Lily didn’t ACTUALLY say FU*K, she said fudge. How bout see the episode, THEN form an opinion. For fudge sake people. Chill the f-k out… how bout redirecting the efforts of the No Cuss Club to reading to the elderly, picking up litter, feeding the hungry.”

I’ll come in here and add my usual solution to these kinds of TV-content issues… If you disagree with something that’s on TV, turn the goddamned channel.  You get to control your own TV, not mine or anyone else’s.  Get over yourself and stop projecting your tight-sphinctered morals on the rest of us.  We’ll decide what we can watch, not you.

Around my house, swearing was not really a big deal.  It wasn’t really encouraged, but there were no real repercussions from the occasional lusty swear word for emphasis.  Time and place were more of the focus.  We learned not to swear around our relatives, for sure.  But mostly we learned that there was a big difference between, “Dad, I smashed my fuckin’ thumb,” versus, “Fuck you, Dad.”

If I’d ever uttered the latter, I’d have been in a coma until I was 35.

But when your mom teaches you your first dirty jokes, the parents forfeit taking the high ground.  I don’t think I ever caused any of that kind of trouble when I was little, but my brother did.

When he was in, I think, 2nd grade, each morning one kid got to go up in front of the class and tell a joke.  One of his friends gave him a funny joke to tell, and my brother was naïve enough to do it.

“What’s pink and lays at the bottom of the ocean?

All I can say is that the class found it far funnier than the teacher did.

I don’t recall my brother getting into any serious trouble at home though.  I’m pretty sure Mom just told him to stop listening to his friend.

Good thing we didn’t have a No Cussing Club in 1970, or he might have gotten suspended.  Gotta protect the innocent children, you know?

Unrelated Note
I’d like to thank the people that delurked themselves here for DeLurker Day.  I heard from PPG Industries (T-Man), Anchorage (Betty) and Salineville (Brooke).  Thank you for stepping out of the shadows and publicly supporting my little slice of the internet.  (And abating my growing paranoia over who might be is stalking me…So relieved it wasn’t the CIA, the No Cussing Club, or the C-Street House.)

Dedicated readers are like currency because it is through you that I have a richer blogging experience.
Posted by bluzdude at 6:45 PM

Email ThisBlogThis!Share to TwitterShare to FacebookShare to Pinterest
Labels: Bullshit, The Religious Right, Things That Piss Me Off, TV Bluz