How Suite It Is

Director’s DVD Commentary: I know I didn’t post last week, but I did post late the week before, but I knew I’d have a juicy one on deck for this week.  (And we had a company happy hour Monday night, which is why I didn’t post then.) So I’m sorry for the delay.  Now onto the day’s business…

I know I said I’d never set foot in that big purple toilet ever again, but Sunday I found myself back in the Ratbirds’ football stadium for a game.  All it took was access to a corporate suite.

I have a friend whose company has one of those fancy-schmancy corporate suites and earlier this fall, he offered me a pick of three games to go to with him.  And seriously, I almost turned him down flat.  I mean, I do not like that place at all, especially not after getting cheap-shotted in the upper deck, the last time I was there.  More importantly, I’d rather watch the Steelers game anyway, which was likely to be in conflict with the Ratbirds game.

Second date: The Steelers game itself.  He assumed I’d jump at this one, but I had no intention of spending 4 hours getting screamed at by 60,000 idiots.  Pass.

Third date: Eagles.  For this date, the Steelers were scheduled to play on Sunday night.  So once I confirmed this would be in an indoor suite, I accepted.  I’ve never been to one so the prospect was exciting.

Naturally, about two weeks ago, the NFL rescheduled the Steelers game out of Sunday night directly into competition with the Ravens game.  Gah!  Unfortunately, I felt it was too late to cancel so I figured I’d make the best of it.  I’d bring my ear buds and listen to the game from the Steelers app on my phone, and then catch the highlights later.

All week long, the weather reports suggested it would rain throughout the entire game.  But then by game day, the threat of rain was changed to around 40-50%, although the temps would drop sharply from the 50s into the low 40s during the course of the game.  I just obtained a new rain jacket and rain pants, but I opted to go with the jacket alone.

I decided to go “neutral,” by wearing Ohio State stuff… had and long-sleeve tee, although I did wear a Steelers tee shirt underneath.  I felt I had to do something with good mojo, even if only I knew it was there.

I had the tickets in hand; my friend mailed them to me earlier in the week.  They were actually quite nice looking.  I figured I’d wear the ticket around my neck on a lanyard.  It would be nice to have a proper ticket in my year-end ticket collage for a change.  I much prefer the cardboard tickets over the home-printed ones.  This one was full color, with nice embossing and gold leaf.  I know they ask to see your tickets every 15 feet in the hoity-toity sections, so I wanted to keep them crisp.  I had a big-sleeved lanyard from 2006 when I went to my first and only NASCAR race, so I thought it would do nicely.  The tickets fit in, which was the important part.

I got there right at 11:00 when they started letting people in.  I was to meet up with my friend later; he was coming from the train station on the way home from New York.  I went directly up to the suite to check it out.  At that hour, there were not yet any food, drinks or people around, so I had the place to myself.  It gave me a chance to take some video and shoot some pictures, without looking like a rube. 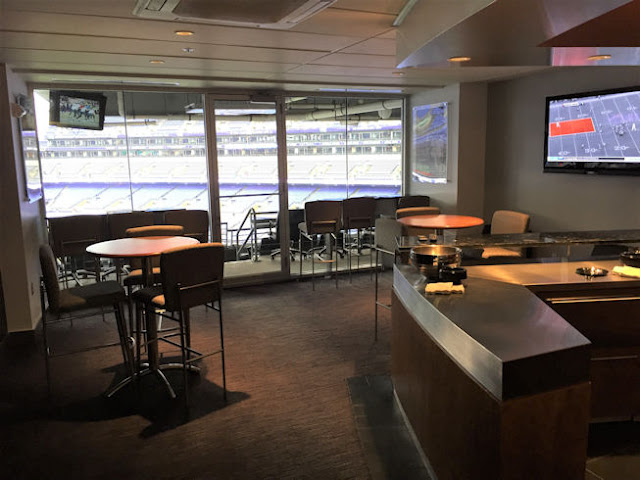 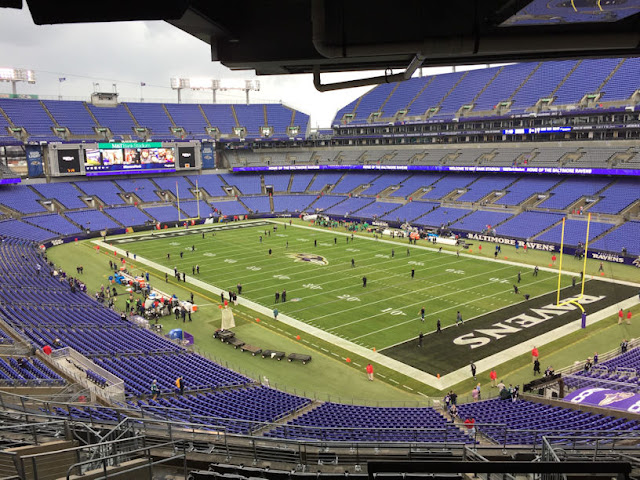 The view from our “balcony.”  They had really nice reclining desk chairs out there.  Too bad I never got to sit in them. 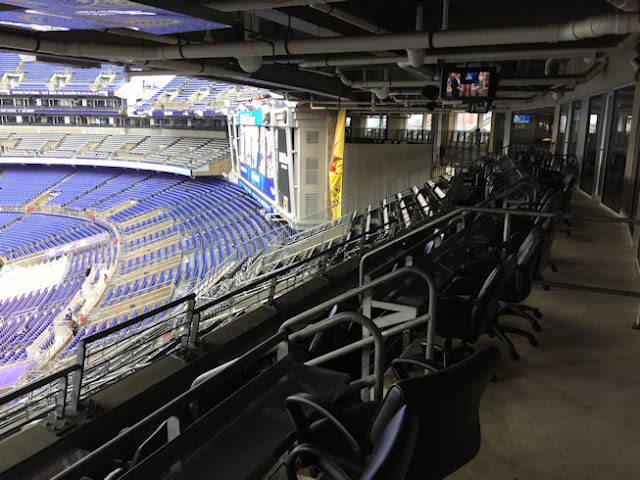 The next activity was to make use of our ONFIELD PASSES! 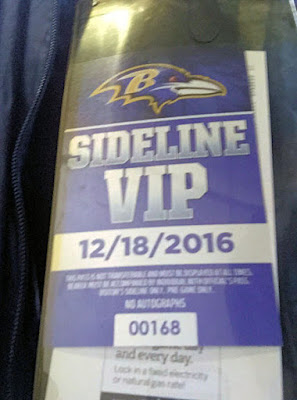 "That's right... this P. is V.I."
My field pass; safely protected in my lanyard sleeve.  The game ticket is on the other side.

I had to go back downstairs and register, (meaning sign a waiver holding the team harmless in case I get tackled or trampled or something).  I was kind of hoping I’d get the chance to go out to midfield and defile their logo, but I wasn’t optimistic.  Plus, I promised my friend I wouldn’t misbehave.  So much for burying a Terrible Towel under the bench.

Anyway, after meeting up with my friend, we filed onto the sidelines around 12:10.  It was really a thrill to come out through the tunnel and onto the field; it was a lot like my “First Pitch” experience with the Orioles two summers ago.  Even in enemy territory, the thrill of going on the field conquers all.

We had to be careful where we stood, though.  The security team were real Yellow Line Nazis.  One toe over the line and you got scolded. 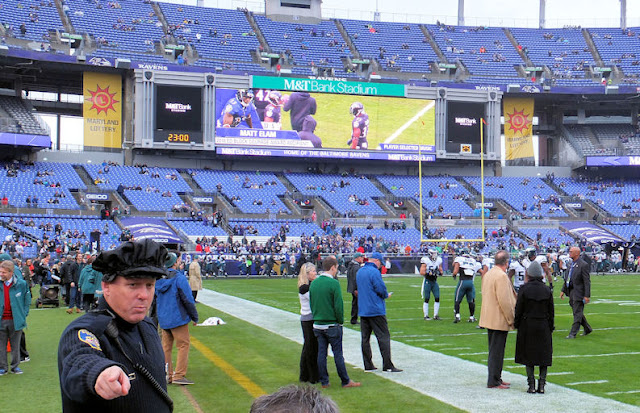 Here’s an officer yelling at a little kid who had his foot on the line.  Young Lives Matter!

But we got to stand along the sidelines and watch the players go through their warmups, from just a couple feet away.  Eagles fans, being Eagles, got to heckle the Ravens from close up.  I just shut my yap and took pictures. 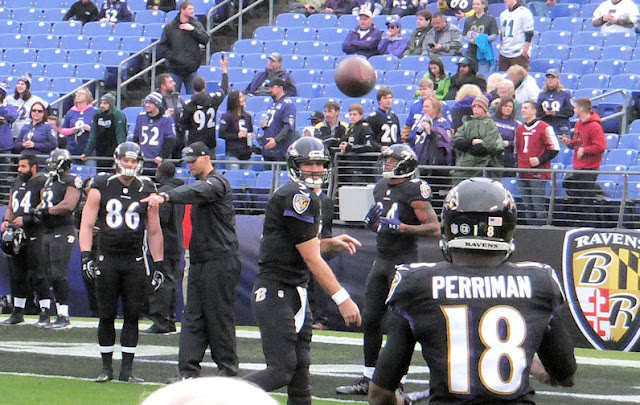 Flacco throws one to Perriman.

By the time they shooed us off the field and we got back up to the suite, everyone seemed to have arrived.  But the food and beer did too, so I tucked into a nice assortment of submarine sandwiches, hot dogs, chicken fingers and whatnot.  (They brought out pit beef and pizza later.)

The “problem” was that everyone had already claimed their seats outside on the “balcony,” where they had two rows of desk chairs behind a table surface.

I didn’t really mind, because after all, I didn’t really have an emotional attachment to the game, other than desperately wanting the Ratbirds to lose.  And then we discovered that we could get any football game going on, on one of the three TV monitors.  A gaggle of New Yorkers put on the Giants/Lions game, and I got to see the Steelers/Bengals game, just like I originally wanted.

It was kind of like a normal Sunday for me at the sports bar… watching the Steelers game (without sound), watching the Ravens during commercial breaks, and eating tailgate food and drinking beer (only for free!)  I was living the dream!

It was just kind of funny because there I was watching the game on TV, and then every now and then, stand up to look out on the live game going on.

Sometime in the 2nd quarter, that temperature drop hit.  You could see the dark clouds coming and the wind starting to whip things around and shake the outdoor TV monitors.  Next thing you know; everyone was back inside.  I had my pick of outdoor seats then, but I was content to watch the Black and Gold from my comfy high-top seat. 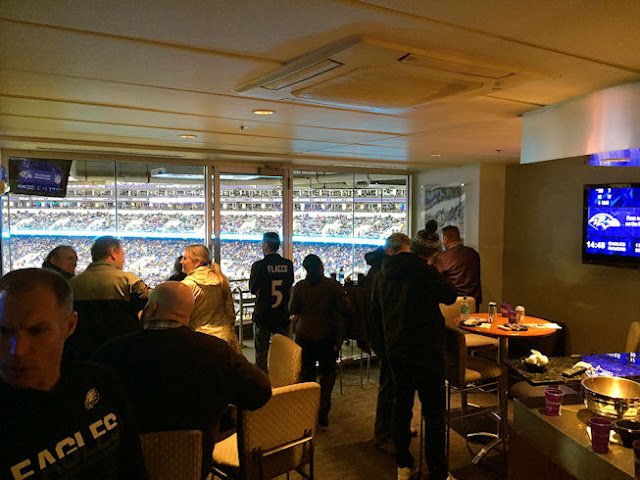 I’d told my friend, right off the bat, that I intended to leave about halfway through the 4th quarter.  I did NOT want to wait for the end and then spend 90 minutes trying to get out of the parking lot and stadium area.  Not being invested in the game made the decision to leave early a slam dunk.

The problem was that the Steelers game was a nail-biter and in addition, still had over six minutes left when the Ratbirds game was down to two minutes.  I was like, (looking at the live game), “Stall!  Stall!  Call all your timeouts!”  Then spinning to the TV and going, “For Pete’s sake, hurry up and DO something!”

The Steelers, who had been down 20-6 at halftime, were driving for a go-ahead touchdown, amid another Bengals meltdown.  They committed 4 consecutive penalties on the Steelers last scoring drive.  Thanks, guys!  Anyway, as soon as the Steelers scored to take the lead, I shot out of there.  Got out of the lot and across town with minimal delay.  I was back at my regular sports bar by 4:30.

I’d noticed a tear in the lanyard sleeve starting, during the game, but I took pains not to tug on it from then on.  Apparently, it tore completely between the suite and my car.  I retraced my steps from the car to the bar, but it was nowhere to be found. 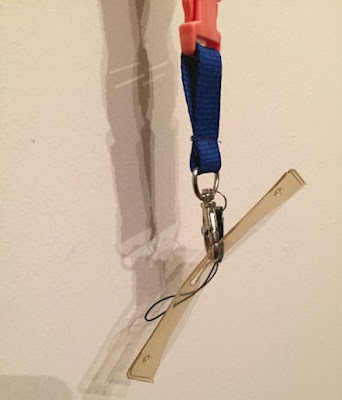 So much for my classed-up ticket collage.

At least I still have the parking pass.  (Lot N.)  Note the gold leaf embossing!  Those Suite People really get all the perks. 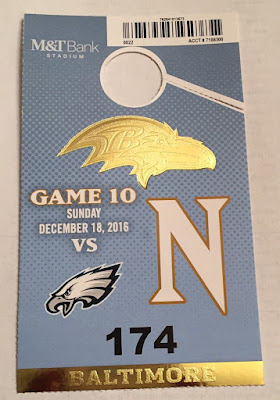 I hope you all have a wonderful Christmas, Hanukkah, Kwanzaa or whatever miscellaneous Pagan ritual you care to celebrate.  See you on the other side.