I’ve been sitting on this post since September and it’s finally time to let it out.

The Steelers/Ravens game was Christmas afternoon, so I watched it over at my brother’s house.  It was quite dramatic the way it ended.  The Steelers’ QB drove the team 75 yards in just over a minute to score the game-winning touchdown, with Antonio Brown reaching the ball over the goal line with nine seconds remaining. 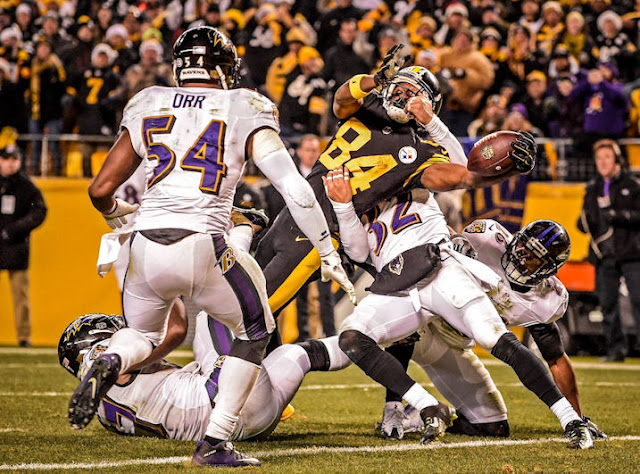 Throughout that whole last drive, neither my brother, nephews nor I were sitting down.  We all just kind of stood around TV alternately pacing and wringing our hands.  I’m pretty sure the neighbors heard us when the Steelers finally scored.  I know we scared the shit out of the cats…

Now that the Steelers have beaten the hated rival Ratbirds and knocked them out of playoff contention, I needn’t worry about upsetting the Mojo Gods with this post.  I mean, if they lose against Cleveland next week, it’s OK because they’re locked into the third seed, regardless of the outcome.  And then if we lose in the playoffs, well at least we still stomped on the Ratbirds’ dreams.  I can live with that.

As you may know, I give those Chinese jersey sweatshops a lot of business.  I order baseball, football and hockey jerseys from them on the regular, so my friends down at the sports bar are always asking me where I get them.  Over the summer, two of my bar friends asked me to get particular jerseys for them the next time I placed an order.  One wanted a Washington Capitals hockey jersey; the other wanted a Ravens jersey.

In August, I figured out what I wanted to add to my collection this year, (White Bud Dupree Steelers jersey and a Geno Malkin “new” white Penguins throwback jersey) and sent the order off, hoping to get it back in time for football’s opening weekend.

Well, the good news was that the order came in on time and the hockey jerseys were fine.  The bad news is that the jersey I got said “White” on the back, instead of Dupree.  Also, the Ravens jersey came in a youth large instead of a men’s large.  Mine, I wasn’t worried about; I’d have time to get that fixed.  But I felt pretty bad about the delay with my friend’s jersey.

Dealing with these overseas people can be troublesome.  They were willing to replace the Dupree jersey without issue, but they wanted me to send them another $10 to keep the youth jersey and then send me the correct one.

I was like, “You want me to send you MORE money to fix a mistake that YOU made?”  But they were adamant about it.  I might have continued the fight but I needed their help more than they needed me, and I was already into them for about $200.  I felt I had to do what I could to make sure I ended up with the goods I needed.

So eventually both replacement jerseys arrived and all was well.  And that’s how I came to have a Ratbird jersey in my place for a month… this being a house that’s so averse to Raven colors, I wouldn’t let Pinky even have purple towels for her bathroom.

It was unsettling, but it made me think: What would be the best way to put this jersey to some use?  And that, my friend, is the “real” subject of this post.  So I give you, without further delay: 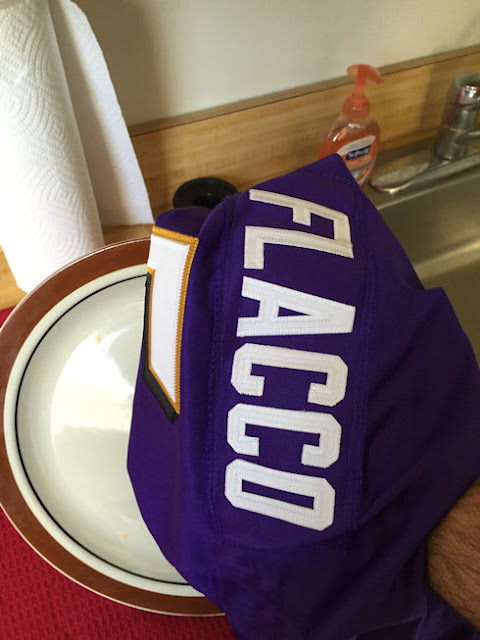 #1 Dishrag, for after you’ve eaten the Ratbirds’ lunch. 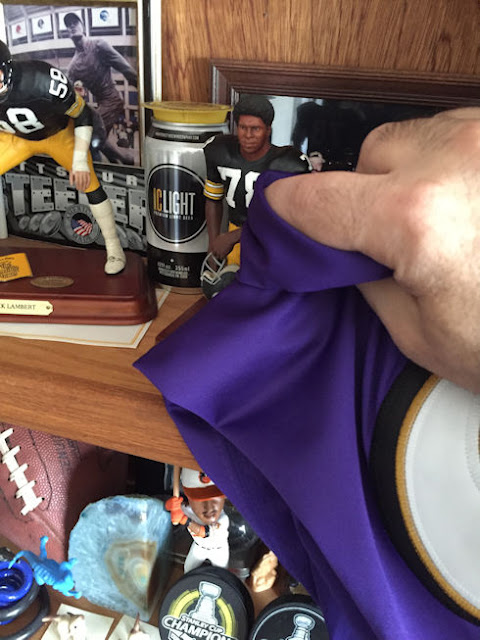 #2 Dust rag, for wiping down your Steelers collectible figurines. 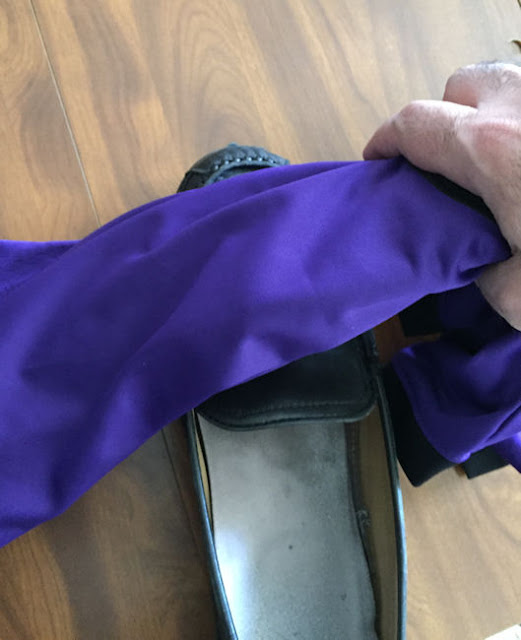 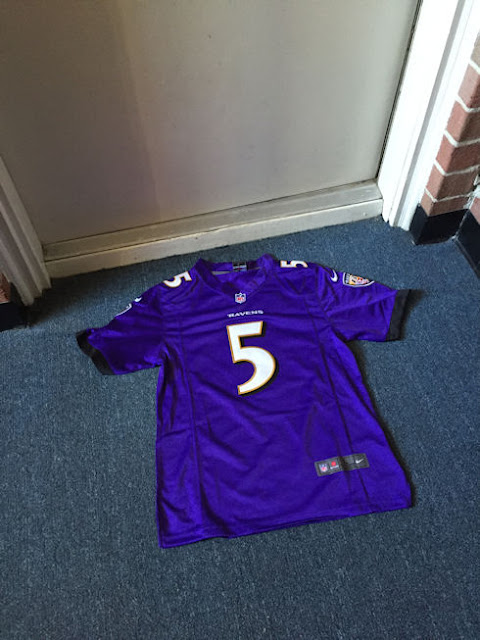 #4 Doormat, perfect for wiping the road grime and assorted debris from your shoes. 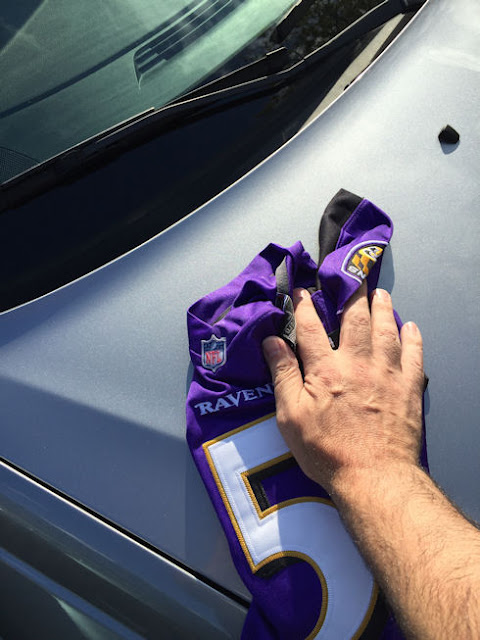 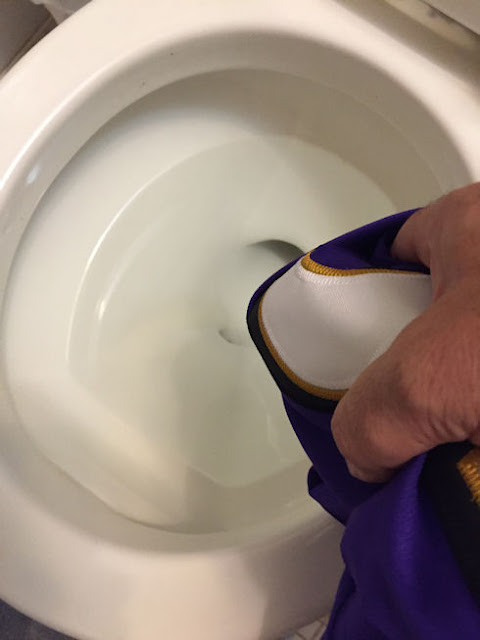 #6 Toilet bowl scrubber.  Perfect for wiping the rim, or scraping off the cling-ons. 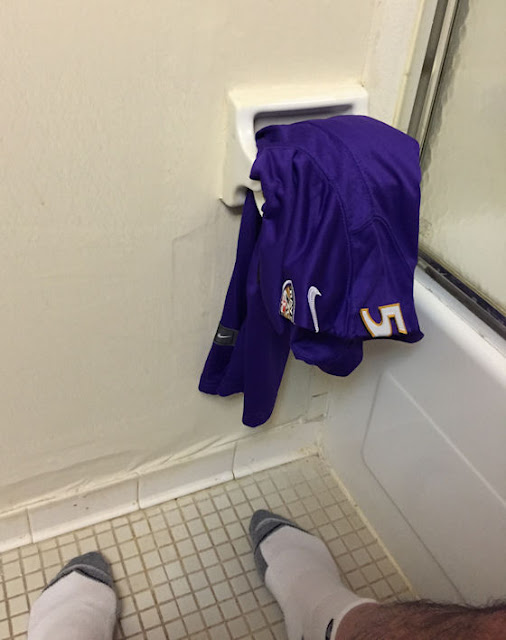 #7 Heavy-duty toilet paper for cleaning out the old end zone.

Am I missing anything?

Director’s DVD Commentary: No jerseys were actually harmed during the creation of this post.  In fact, I gave the jersey to my nephew Sammy, to give to one of his friends.  (Although I should have had Sam charge the kid $10, to recoup my loss.)

This will likely be my last post of 2016 so please have a happy New Year and a tremendous 2017.  And RIP Carrie Fisher.  No one will ever rock those cinnamon bun hairpieces like you.