It was with great sadness, this weekend, that I learned of the passing of Chuck Berry.

There is no possible way to over-estimate the influence of Chuck Berry on rock and roll.  He pretty much invented it, Elvis and Bill Haley be damned.
If it wasn’t for Chuck, the Rock ‘n Roll Hall of Fame would be nothing but an overly-stylized greenhouse. 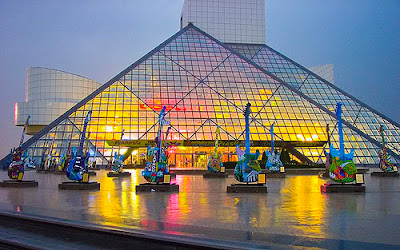 Someone once asked George Thorogood why he didn’t write many of his own songs.  George replied, “Because Chuck Berry already wrote all the good ones.  On his 1990s live album, Thorogood called Johnny B. Goode the “rock and roll national anthem.”

With the latter quote in mind, I had a thought on Sunday, as the Penguins regular anthem singer, Jeff Jimerson, stepped onto the ice:

Jimmerson should skip the Anthem today and sing Johnny B Goode. Or Livin' in the USA. RIP #ChuckBerry #Let'sGoPens
— bluzdude (@DarwinfishBluz) March 19, 2017

That might have set off a scandal amongst this country’s “true patriots,” though, who are against anything but dewy-eyed reverence when it comes to the anthem, and the NHL doesn’t need that kind of bad PR.  Maybe they could have done it along with the regular anthem like they do when a US team plays a Canadian team and they do both anthems.  Would have been awesome!  Without Chuck, few of the bands they use in hockey arenas would even exist.

Johnny B. Goode is one of the most “covered” rock songs in history; any garage band worth its salt has a version.  Besides Thorogood’s, Johnny Winter’s version is my favorite.
It’s no accident that the Back to the Future scene where Marty McFly has to play for a 1950s dance, they used JBG.  Not Elvis, not Jerry Lee or Bill Haley, but Chuck Berry. 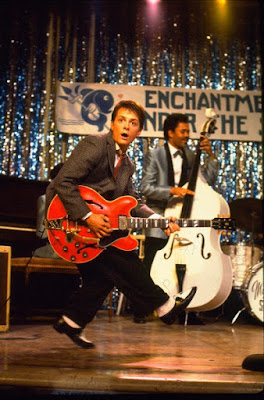 That’s what gave the scene resonance; if Chuck Berry wasn’t the root of modern rock music, that bit falls flat.

“Well all of Chuck’s children are out there, playin’ his licks
So get into your kicks.
Come back baby, rock ‘n roll never forgets.”

I think the musician most closely associated with Chuck is Keith Richards.  It was Keith who was the driving force behind the feature film “Hail Hail Rock and Roll,” which was part documentary, part concert film. 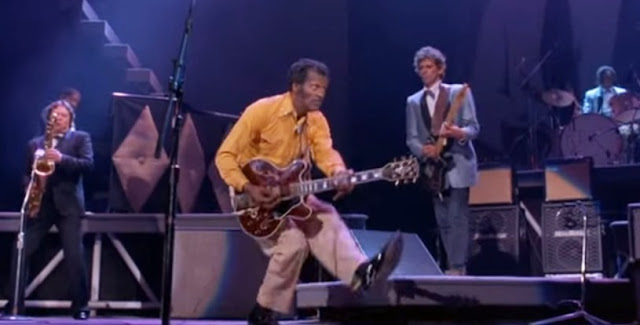 Keith had a camera crew follow him around as he convinced Chuck to do the project, put a band together (including forging a peace between Chuck and his old piano player, Johnny Johnson), and rehearsed the show.

There’s no question that Chuck was a ball-buster.  The film shows Chuck and Keith going nose to nose when Chuck doesn’t like the way Keith is playing a particular lick and makes him do it again and again.  And Keith takes it, as a show of respect for Chuck.

That respect is probably the only thing that kept Chuck out of the hospital, on another occasion where he punched Keith right in the face.  See, Keith picked up Chuck’s guitar, which is something he allowed no one to do, ever.

"If that was anybody else," Keith said later, "I'd have slit his fuckin’ throat.”

Chuck had several quirks that were known throughout the music business.  From at least the 70s on, he never had a permanent backing band.  He’d just roll into town and the promoter would have a local band play with him.  It was a given that they all knew his songs.  Whether they could agree on a key to play them in, was another story.

Chuck insisted on being paid in cash, following his shows.  He did all his business on a cash basis.  And after the royal screwing black musicians got throughout the 50s and 60s, from record labels and businessmen, I don’t blame him.  Those guys got screwed dry by the very machine that made them famous.

There’s one thing that always bugged me:  Out of all the huge, timeless, inspirational hits… Johnny B Goode, Roll Over Beethoven, Livin’ in the USA, No Particular Place to Go, Maybelline… his only number one Billboard hit was a ridiculous 1972 novelty song called “My Ding-a-Ling.”

Just goes to show that there’s no accounting for taste.  (Sure, I liked it at the time, but I was eleven, for cryin’ out loud.)

So, the next time you find yourself jamming to some glorious, blues-drenched, three-chord rock ‘n roll, give a thought to where it all came from and remember Chuck Berry.

Rest in peace, Chuck.  And just wait till you get a load of your new backup band!
Posted by bluzdude at 6:53 PM