I don’t have enough material on any single issue to warrant a post today, so that means it’s time for some Odd Bits.

Fox in the Henhouse
I saw this story clinging to my Yahoo home page and I just kept wondering, “Why is this a story?”

The click-bait headline was: “Drexel Professor: ‘I tried not to vomit’ when a passenger gave his seat to a soldier.”  The gist was this professor thought the first class passenger offering to trade seats w/ a uniformed serviceman was smug and self-congratulatory, and tweeted about it.

My take: the guy sounds like an asshole, he’s taking a lot for granted about motivations here, and ultimately it’s none of his business.  But it’s not a news story.  Some dude got his pants in a twist.  Happens every day.

Then I saw the source of the story: Fox “News.”  That explains it.

1)      Fox loves to characterize colleges as a hotbed of liberalism being inflicted on our apple-cheeked youth in a dastardly attempt to turn them into godless Commies.  So anytime a professor can be shown in a negative light, (and this one came gift-wrapped for maximum harrumphing) it’s going to get maximum exposure.

2)      Fox also has a stake in combatting the education of idealistic young people.  See, if they go to college and find out that a bunch of things they learned from their parents or church aren’t really true, they might not become a reliable red-state voter like Uncle Rupert wants them to be.  The last thing Fox wants if for young voters to decide that fossil fuel ISN’T the best way to go, or that coal sludge dumped directly into running streams might foul up the local fishing, or birth control really IS the most realistic way to prevent pregnancy.  Why do you think these voter ID states don't include college IDs as permissible forms of identification? 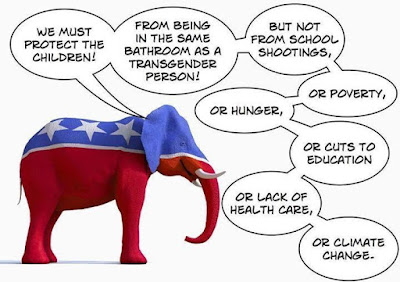 3)     This particular professor has made statements in favor of white genocide and generally taking white men to task for the plight of the oppressed.  Fox doesn’t like that because it conflicts with their editorial angle that white men have already solved racism, and the only bigotry left is that of “reverse racism” against whites.

So, in a nutshell, we have some disturbed white guy sending pissy tweets.  This is not news to anyone but Fox.  Unless it's the President, in which case it gets a half hour’s conversation on Fox and Friends.

Yes, Three’s a Crowd, but also Necessary to Keep the VP from Sexing you Down
The “Billy Graham Rule,” have you heard of that?  If so, that’s probably because it just came out that VP Pence adheres to that rule, or at least he did 15 years ago.  In honor of this rule, Pence declared that he would never eat dinner with another woman, or be anywhere where there are women and alcohol present, without his wife.

Now, I can see an angle of self-preservation there that I can’t necessarily condemn.  If you can’t control yourself, that is, in which case it’s better to keep temptation to a minimum.  But aren’t these super-religious family men supposed to be spiritually prepared to ignore their baser instincts?

As some regular schmo, maybe a guy can pull that off.  But as the second in command of the US government?  That doesn’t seem very fair to women.  (As if the current regime gives a shit about fairness to anyone who isn’t a rich white man…)

Like on a golf course, the business of government often gets done over dinner.  That’s one of the reasons why country clubs were forced, kicking and screaming, into allowing female members.  So would he use this evangelical throwback of a “rule” as the means not to have dinner with his, say, Secretary of Education or Transportation?  Maybe.

More likely, it just means he’d be less likely to hire a woman into any position of power, with whom he might have to work closely.

The thing that yanks my pubes about it is that it’s just one more way to blame the woman for a man not being able to keep his dick to himself (or to his wife).  It doesn’t matter that she’s qualified to do the job or that she is not remotely interested in the VP’s Department of Schong; the only solution is not to allow her to reach a position of power that entails working closely together.  OR, hiring her but restricting access so that she can’t do her job to the fullest.

It’s just one of a zillion ways that white men keep a little more prosperity for themselves, at the expense of women of all colors.  But it’s all good because some old religious con artist said so.

But on the Bright Side…
Speaking of con artists, there were new felony charges brought against those bogus “citizen journalists” who accused Planned Parenthood of selling baby parts for profit, via a criminally deceptive video tape.  The two videographers were charged with 15 counts each of filming someone without their consent.  (That’s one count for each person filmed without consent.)

It’s not exactly racketeering, but hey, if they could get Capone on tax evasion, why not?  I’d love to see these clowns do some jail time.  Maybe their next “sting” operation can be of the “How Not to Get Boned up the Ass in the Shower Room” variety.

It’s just funny that these “sting” tapes have triggered more than a dozen state investigations and not one turned up even a sniff of wrong-doing, let alone a chargeable offense.  Yet to this day, state governments still site the tape as “evidence” that Planned Parenthood needs to lose funding.

Social conservatives got what they wanted, though.  They got their election-year headlines.  They didn’t actually need any of it to be true; it just had to be sticky enough to last through Election Day.

It’s funny how these pricks will stoop to any level of deceit if it will get them what they want.  And they can probably find a Bible verse to back them up, too.