In his most effective Russian Problem Diversion yet, President 45 started going all Commander in Chief by dropping bombs.

First, he pretended to avenge the gassing of the children he wouldn’t let in our country by bombing the airfield in Syria, from which the gas attacks were allegedly based.

The following week, he dropped the “MOAB,” or so-called Mother of all Bombs, in Afghanistan, to blow up a tunnel system being used by ISIS.  This is the largest non-nuclear bomb the US has in its arsenal.

In reality, the results were mixed.  In Syria, the airfield was open and running traffic through it the very next day.  It was almost as if the Syrians knew the strike was coming and moved all their aircraft and personnel away from it… which is exactly what ABC news reported.

The White House said that they notified Russia before the strike; it’s not a stretch to think that the Russians then tipped off their buddy Assad, to mitigate the damage.

In Afghanistan, the body count is in the 90s; all ISIS bad guys, they say.  But what the military experts say is that this was not a bomb built for hitting hardened targets like tunnels or underground bunkers.  They have other ordnance for that.

As far as I can see, the entire point of all these explosions was to 1) Divert attention from all the Trump/Russia leaks, and 2) Look like a tough-guy president. 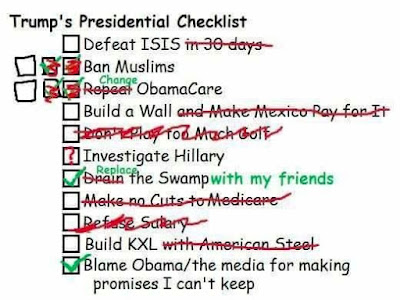 Republicans are never happier than when one of their guys is blowing shit up, and the bigger the boom, the better.  I bet there was nothing but raging wood all up and down the right side of the Congressional aisle.

Granted, it has to be one of their own guys.  Remember when Obama wanted to address Syria and he went to Congress to ask them to authorize military action?  Remember how Congress said no?  I do.  Obama wanted to blow up more than a runway and the Republicans both 1) said it wasn’t enough and 2) we shouldn’t involve American troops at all.

But now with their guy in office, his muted response resulted in his being seen as William the Conqueror.

I guarantee they used the MOAB bomb for no other reason than it made a big kaboom… one that would play well on the nightly news.  And they knew all the guys in the bar would be thrilled that the old U.S. of A. was back to kicking ass and making fireballs that can be seen from the space station.

They probably wanted to get North Korea’s attention as well, but I’m not sure that would make an impression.  NK is basically a suicidal regime.  The dough-faced tyrant over there doesn’t care what happens to his captives… I mean, citizens.  I’m sure KJU has a tunnel from his presidential palace down to a hardened bunker for himself and the livestock he’s been using to feed his face.

If you ask me, they’re the perfect enemy to hype up against.  True, they’re batshit crazy, but do you really think they can do damage to the American homeland?  These guys couldn’t hit the broadside of a barn at 20 paces.  If you look closely at their missiles, you can see ACME stenciled on them.  And we think they’re going to get one all the way across the Pacific and hit us?  They couldn’t even blow up the Panama Canal correctly, with the Chechens helping them. 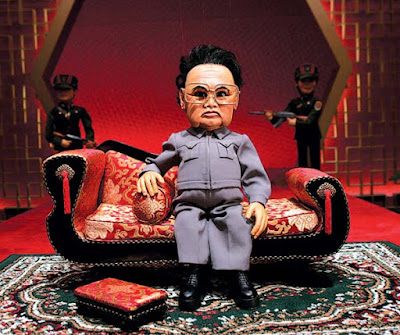 Of course, they could probably succeed in “accidently” lobbing a missile into South Korea or Japan.  So I suppose we ought to clear out.  I bet the natives are restless over there.

The best idea on Korea I’ve heard so far came from Dilbert cartoonist, Scott Adams, who says all we need for a peaceful resolution is a way for North Korea to save face.  He suggests having South Korea give up their half of the Demilitarized Zone, on the condition it’s occupied exclusively by the Chinese.  That way South Korea gives up nothing useful, North Korea gets to claim victory and neither one will cross China.  Everyone wins.

Of course, we wouldn’t get to blow anything else up and where’s the fun in that?

But Pantz can still parade around in a brand new bomber jacket and talk tough.

Who, among this gang, have ever served?

Why can't we just let far away countries have their own civil wars in peace!?

That's a fair point. Neither side in Syria are allies of ours. The US originally stepped in because Assad used gas on civilian populations, in violation of international law.

Our involvement should be limited there because there's no scenario where we come out ahead.

I can still hear Trump proclaiming "America first!" on the campaign trail. What happened to that?

I know, right? You're supposed to stop campaigning once the ballots are in, especially if you've won. I think this guy has a 4-year old's need for constant praise and reinforcement.

Right you are. He would rather be insulted than ignored.