Happy Memorial Day to all with family members who have served but never returned home. They did what they did so we may do what we do.

On tap today, we have two debunkings and one pet peeve. So let’s have at it… 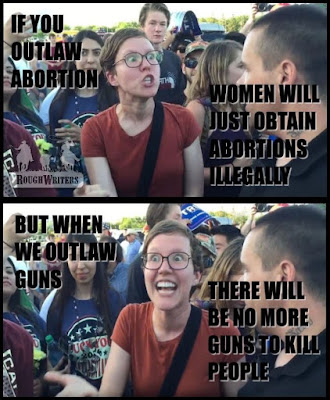 This is a simple “strawman” argument… The fallacy is that no one is proposing to “outlaw guns.” And the inference here has to be all guns because they're saying the end result is "no more guns." So they’re perverting what the overwhelming majority of gun control advocates are advocating, making it broader and more absolute, and then attacking that as if it was the legitimate argument. That’s the strawman fallacy.

Most gun control advocates are for banning semi-automatic weapons like the AR-15 along with high-capacity clips. Others are backing more robust background checks, including those with domestic violence in their past, those with mental health problems, and just for kicks, people on the fucking Terrorist No-Fly List. None of the proposals rise to the mantra of “banning (all) guns.”

But it’s harder to whip up persecution hysteria over common-sense, measured responses, so they go with “The Libs are comin’ ta gitcher guns.” And why not? It’s good for gun sales and that’s all the NRA really cares about. 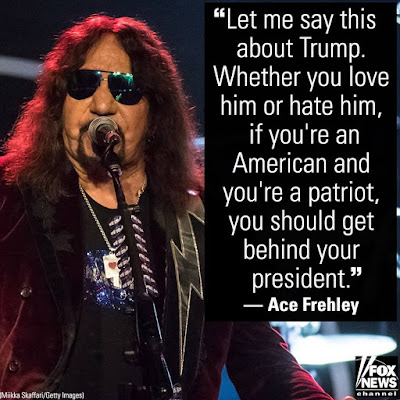 If anyone believes in this line of defense, I want to see an instance where they upheld the same premise with an opponent in office. If not, then it labels this idea as nothing more than another partisan shot that only applies when your own guy is in charge.

Then again, it’s doubtful that Ace has any functioning brain cells left after decades of living the Rock n Roll lifestyle. Plus, having to listen to KISS music nonstop…

And Now On To the Pet Peeve
Drivers! Argh! Big surprise that it’s Maryland drivers who are making me crazy. But this time I have photographic evidence.

First case: I’m trying to pull out of the Burger King parking lot after lunch and I need to make a right. There are two lanes to accommodate the exit: one for going left (or straight across the street) and one to go right. (Plus one on the far left for entering the lot.)

Naturally, there’s a giant SUV straddling both exit lanes. And of course, there is no blinker in use. I have no idea where this beast is going and she didn’t leave me any room to squeeze by to make my right. 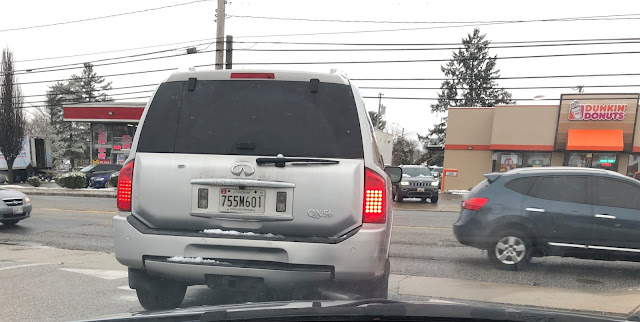 Because she was making a left, (as I eventually observed), she had to wait for traffic from both directions to clear. I could have made my right easily, if she in the left-turn lane, or was even two feet to the left. But no, in Baltimore, it’s all about ME and where I’M going. Screw everyone else.

I guess it serves me right for eating at Burger King. Maybe this is nature’s way of telling me I need to eat more salad.

So now, not more than one week later, I run up on the same situation. 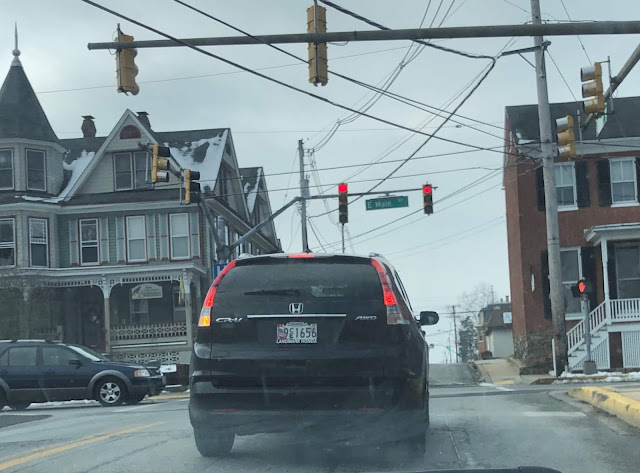 This time it’s out at an intersection rather than a parking lot exit. We need to make a right but there’s another SUV, no blinker on, smack dab in the middle of a road that can easily accommodate two vehicles side by side. If he’s over to the left, I and any other car can make a right on red if we need. But this pig is in there hogging the whole width of the street, for absolutely no relevant reason other than obliviousness.

Any of these instances can just happen, I understand that. But this happens ALL THE TIME here in Baltimore. I suppose it bugs me all the more because this is something I make a conscious effort not to do. Although sometimes it bites me in the ass when I pull to the left lane at an intersection where there is no left-turn signal just so others can make the right. And when the light turns green, then the guy in front of me puts on his blinker and sits there waiting to make a left.

The smooth flow of traffic requires all parties to do their part to keep things moving. You get one Me-First asshole out there, thinking only of himself and the whole works get gummed up. You get blocked merge lanes and intersection gridlock and eventually road rage fatalities.

So it’s probably a good thing that I don’t carry a gun in the car.

What I really want is a hood-mounted water cannon. Maybe if I clean off their back windshield (or blow it out) they might notice that there are other people on the road.

Director’s DVD Commentary: I considered smudging out the license plates on the offending cars, but then I figured, “Screw’em,” because that would take extra thought and effort on my part to cover someone who exhibited neither.

I suspect that if I gave it some thought, an abortion/gun analogy is... well, they're not analogous, really. If they were, of course, I'd be asking why gun advocates have pushed for things like the Heller decision to set a national definition of gun rights but insist on overturning other Supreme Court decisions in order to let it all break down to the states.

But I won't do that. Because it's always a bad analogy.

"Too close for missiles, switching to guns."

So MD drivers dislike MD drives too? Good to know! Hubby and I find them crazy. Always too slow in the passing lane, never a blinker and on Saturday drove across 4 lanes on the toll rode to get in front of us with horn a blarrin' because they just decided to move over 4 lanes with no care in the world for a blinker or other cars that might hit them.
And this is why I don't have a gun in the car - I'd use it. (or have a gun)

I decided to check you out because of your mention of the Baltimore Metro. I haven't been back there in years, but that's where I was born and raised. I lived in between the old Memorial Stadium, directly across from Mergenthaler (Mervo) High, and not too far from Morgan State University. As a kid I was pretty much chauffeured around or by bus until I joined the USAF, so traffic wasn't something I focused on all that much. When I went back as an adult, I pretty much tried to travel on side roads, but there were times I had to drive on Charles Street or the Expressway and it was not fun.(lol) Baltimore was bad, but I had some harrowing experiences in Washington DC, where I worked, and in Atlanta Georgia. To keep my sanity in DC, I had to take the subway and Georgia is still crazy! I like your blog by the way! Hugs...RO

Thanks, RO. Welcome aboard.

I don't know if it's this area, or driver behavior has changed everywhere and this is where I happen to be at the time.

Doesn't make it any less irritating though.

The consistency is that Republicans are only in favor of State's Rights in states that agree with them.

The difference, Peggy, is that I learned to drive elsewhere. I may be a Maryland driver now, but I have Midwestern training. When I first moved here 20 years ago, I had to ask my brother (who lived here longer) if Maryland even HAD driver's ed.