The news of the weekend seemed to be all about the Current Occupant’s renewed race-baiting attack on Rep. Elijah Cummings and Baltimore. I have a few opinions on this because A) I have lived in Baltimore for almost 22 years and B) Cummings is MY US Representative.

It was interesting to me, the next morning, to see the Baltimore Sun, (the newspaper I still have delivered every day), not so much toss down the gauntlet but smack him in the jowls with it. 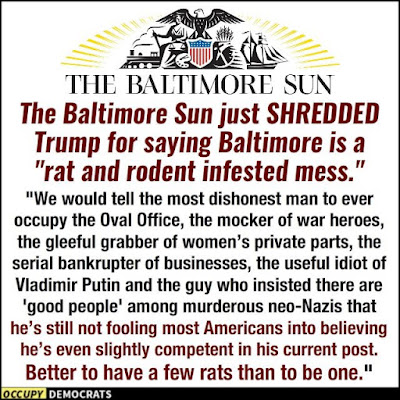 As much as I liked reading this in the morning paper, it was even better seeing it float across Facebook.

I don’t know whether the C.O. thought this up on his own or was guided by Fox “News” again, but it’s a clear political winner for him to attack Baltimore in the most graphic ways possible. First of all, he knows he has zero chance of carrying Maryland in the 2020 elections, as it is a solidly blue state when it comes to national politics.

Secondly, it’s more red meat for his deep red racist base. It’s apparent that his strategy for the upcoming presidential race is to abandon the dog-whistles and go straight for the blatant racism.

Aside from being a “blue” state, Maryland is on the C.O.’s “naughty list” because it resists his efforts to let ICE pull all the brown people from the streets, fields, and kitchens and send them to detention areas. That’s another paddle he can use to whip up the white guys’ fear of losing status. So yeah, attacking Maryland is a win for him.

Except, of course, to people who have a problem with fallacies and incorrect statements. Here are a couple of flaws in his attack.

1)      There is little sense in attacking a congressman about the state of his district. This is strictly a local-politics situation. A congressman needs a majority of other representatives to vote together to bring about changes to his home turf, which is usually a matter of providing tax benefits to businesses who create jobs there. (Otherwise known as “Pork.”) The condition of streets and alleys and creation of vermin-deterrent policies is a matter for local politicians… Mayor, city council, zoning boards, or at most, the governor.

Our current governor is a Republican and has been cutting vast sums of from the state budget that used to go toward Baltimore City. You want to blame someone for the trash situation, blame the guy who’s tightening the purse strings.

2)      All cities have areas that can be called trashy and rat-infested. You think rats are indigenous only to Baltimore? There are rats to be found in other cities, like Dallas, Atlanta, Oklahoma City, Mobile, St. Louis, Memphis or Charlotte. But he won’t be calling out those states because he needs to win there in 2020.

Anyone can post pictures of a city’s crappiest side. Pics like that have been coming out all over on social media. All cities have some greasy underside that can look bad when brought to light. But you know what? This is also Baltimore: 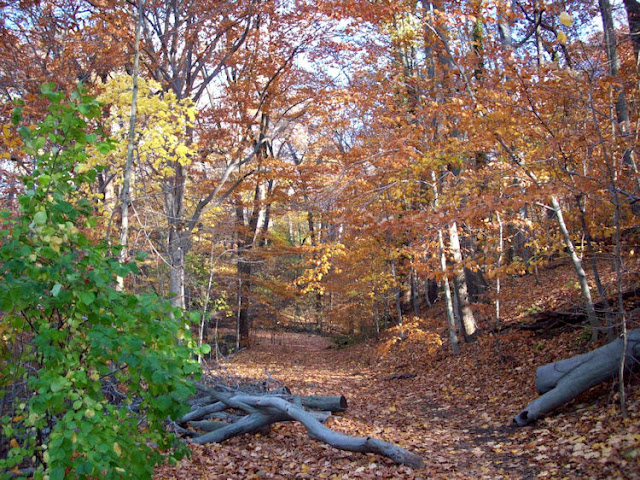 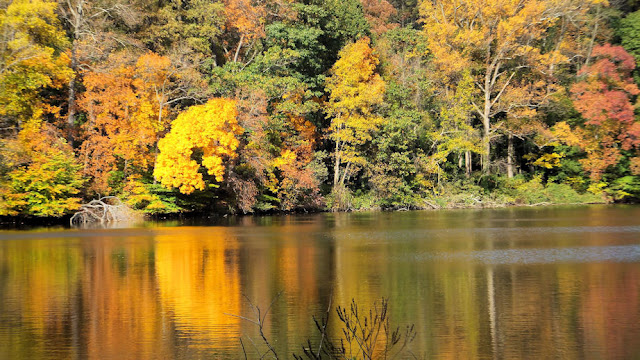 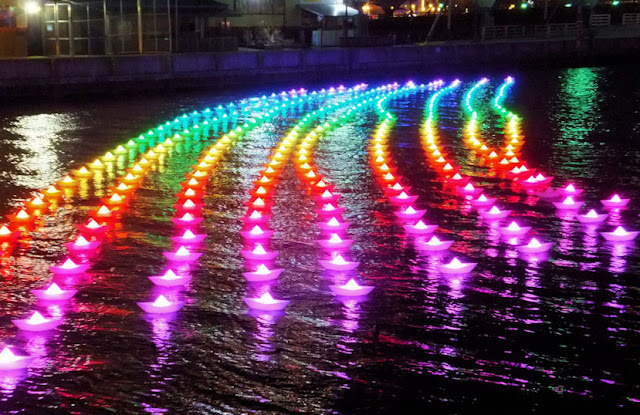 I might also point out that when the president tweets that Cummings is “screaming and yelling” about anything, he should really pay closer attention to the other side of the aisle. I remember a hearing, not so long ago, when Rep Jim Jordan of Ohio was literally yelling at Rep Cummings, who was chairing the meeting, and then wanted more time after he ceded his. He continued to interrupt and badger him until Cummings coldly shut him down using points of order, while never raising his voice a decibel. I don’t think his pulse went over 75.

Another Day, Another Atrocity
Some were surprised that after the Robert Mueller testimony, in which he said the Russians were working to influence elections “as we sit here today,” that Mitch McConnell refused to let a couple of election security bills onto the floor for a vote. I was not.

This behavior is 100% consistent with McConnell’s behavior all along, in which nothing will EVER be brought to the floor if it doesn’t help Republicans stay in power. He bottled up the Garland SCOTUS nomination for 10 months on the flimsiest of excuses, regardless of the huge backlash that caused. He just didn’t care because he didn’t have to care. He was doing exactly what his corporate benefactors wanted him to do… take care of their business by making sure the Supreme Court never goes to a Democrat-appointed majority.

The last thing he’s going to do is prevent the Russians or anyone else from helping the Republicans win. And that won’t change until foreign powers start helping Democrats.

The only way to mitigate the damage McConnell does to our country is to take the Senate by a veto-proof majority. I don’t even worry about beating him directly, although that would help with the numbers. Whoever the Republicans put up next to run their part of the Senate will be just like him. If we can’t provide 60 votes, he’ll block up any progress like a triple-decker cheese sandwich on cork. The only remedy is to take away their power.

Taking the Pledge
I see the Pledge of Allegiance is in the news again, with a survey saying that 61% of Americans are in favor of requiring schoolchildren to recite the Pledge every day.

Personally, I’m against having to blindly repeat anything by rote, day in and day out. And if it’s anything like when I went to school, these kids don’t know the meaning of what they’re pledging anyway. To me, it was just something you had to do every day before getting down to business. I never gave it a second thought.

But with that said, I don’t think it’s that big of a deal. Say it, don’t say it… whatever. Eventually, these kids will grow up and form their own opinions. And some of them will resent being made to take a pledge to a government whose leader calls them animals and tells them they live in shitholes.

It’ll all work out in the end. 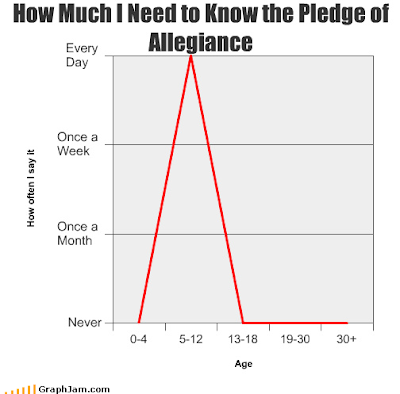 This Guy has MY Seal of Approval
I love a good prank, so I was thrilled to see what was pulled on the C.O. last week at his rally with the Republican Youth. As I’m sure you’ve seen, someone on the A-V team substituted a fake presidential seal for the one that was supposed to be projected on the screen behind the president.

It featured a two-headed eagle (which is a Russian symbol), grasping bundles of cash and a set of golf clubs, with the communist “sickle and hammer” logo above the US flag shield and the phrase “45 is a puppet” in Spanish.

I’ve read about the creator of the fake seal, who’d been marketing his wares online, and that they fired the guy who got it projected, but it’s the latter guy I’d like to know more about. His trolling game is STRONG. I’m sure he knew he’d be fired but the opportunity was too good to pass up.

Sometimes, you just have to take the shot when you have it and damn the repercussions.

I know if I had an A-V company, I’d get this guy on staff immediately. 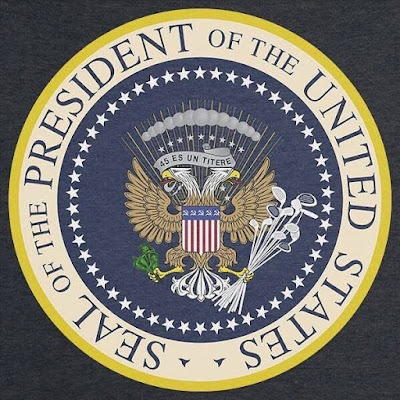 Except, of course, to people who have a problem with fallacies and incorrect statements.

So the Trumpanzees will have no problem with it. It must make things easy for him, only needing to appeal to stupid people.

You guys need to vote that bozo out. I don't know why people think there are still good Republicans. If they were good, they wouldn't stay Republicans. Not the way the party is these days.

Those pictures of Baltimore are beautiful. Portland also has extensive forest areas within its city limits. Although I have to admit that my first thought on seeing the third picture was "is that the gay rat navy?" :-)

I remember saying the Pledge of Allegiance in school. I had no idea what it meant either. They might as well have been making me recite memorized phrases in Albanian. It's stupid, and the "under God" part that was added during the McCarthy era is probably unconstitutional.

Somehow, "Governor" seems to be Maryland's weak spot. We've had 2 Republican governors sandwiched around Martin O'Malley, the latest of which is in his second term. I think it's because the Democrats haven't run anyone but empty suits... uninspiring speakers with vanilla personalities, even the black nominees.

The "Lights" picture was from the used-to-be-annual Lights Festival, held down at the Baltimore Inner Harbor. I think they might have drawn more if they didn't hold it in freakin' March.

I looked at the Pledge the same way as the prayers I was forced to say in Catholic school or at Mass. Just something to rumble through, up until I got old enough to start examining the words and determine, "Hey, I don't really believe any of this shit."

Yep, that was my understanding, that Congress added "Under God" in the 50s, as a way to stick it to the godless Commie Russians. Not exactly hallowed text.

God how I hate this man. Sure BWI has it's issues, so does DC, NYC, Seattle and any major city. But it's not called Charm City for nothing. Seattle is beautiful but it has some very bad areas and homelessness and they never show those photos do they? Only the mountains, space needle and microsoft campuses. But come on what do you expect for the douche-bag in charge?

Your understanding, my witness.

We said the pledge each (rural) school morning in my first years. The 'they' changed it, added "God" words, and we had to change to the new while I was still in grammar school.
Many classmates had difficulty changing their rote programing.

And look at it. Which was, "one nation, indivisible," making doubly sure of the idea of united.

Then they split it. "One nation, under God indivisible," which carves apart the people. Those 'under God' sticking together are divided apart from the rest who ain't 'under God.'

I lived it. My distrust of USGovt and disrespect of blind unreasoned allegiance began then from those hollow words ... subject to rewrite when rightwingers hold power.

Al I have to say is that forest in the first picture look decidedly unraked. Can't you take care of your forests in Baltimore??? Don't you know that leads to forest fires?

That shot was from before the forest maid service kicked in. I left a couple bucks and they swept up later.

I don't think 45 has ever made a complete point in his life. It's always an exaggeration, a lie, a partial lie, or in this case, a mere sliver of the story.

Know what he doesn't talk about? How his son-in-law is one of the biggest slumlords in town.