What Next, Call Off Veterans' Day?

I really don’t understand the point of last week’s Presidential Incomprehensible Move of the Week, regarding children of US military personnel, born out of the country. 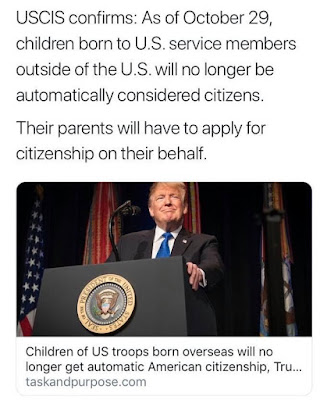 What is it that the Trump administration hopes to gain by placing this hurdle in front of active-duty servicemen and women, who are, you know, actively serving our country?

Short of an official announcement of motive, I can only figure they think it’s a first step to ending birthright citizenship. This is an action that can be done via executive order, but birthright citizenship is specified in the US Constitution, so it would take an amendment to pass and be confirmed in ¾ of the states, (which will never happen. We couldn’t even get equal rights for women past that hurdle and women make up 51% of the country.)

Maybe Stephen Miller put a bug in the president’s ear about plugging loopholes in immigration policy that non-whites may be using. Or ending further “dilution” of the white gene pool from servicemen taking foreign, non-Caucasian spouses.

So now our servicemen and women who are risking their life and safety in the service of their country now have to “apply” to have their kids become citizens?

Since when has applying for anything through the government been a simple, no-hassle experience? It’s all they can do to get healthcare through the V.A. when they get out, and now they have to stress about making sure their kids aren’t deported?

This is how we thank them, by giving them more hoops to jump through and red tape to untangle?

Yes, “thank you for your service,” my ass.

We also have to wonder, what are the criteria they’re looking for in order to grant citizenship in such cases, and who is making the decisions? I haven’t seen any guidance published so that our military people can make informed decisions about it. Won’t the government have to express what it is they’re trying to weed out? I bet the tip-off will show in the paperwork if we can ever see a copy leaked.

Or are they just going to go by pictures and a color chart?

If I’m wrong, please tell me. What else does the Administration have to gain by enacting this policy? 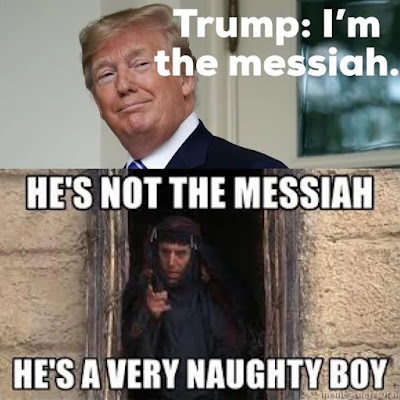 Know what else I’m wondering about?

Where the hell is the outcry from all those people who go all dewy-eyed over the military? Where are all of those who post graphics on Facebook about how we can’t possibly help anyone while we have homeless, unemployed, or drug-addicted veterans? (But never call out their own tribe for not doing a damned thing for veterans while they have the chance.)

And that’s because these people are only interested in veterans as a club to use to keep anyone who’s not in their own demographic from getting help. (As I’ve said many times before.)

Where are the Congressmen, who take every opportunity to be photographed and associated with US military personnel and our most powerful war machinery, but dare not contradict the president?

Where are all the military apologists, who cover and alibi for every war crime ever committed, as long as they were committed in the name of the U-S-of-A? It’s like they’re saying, “We’ll help you out with slaughtering villages of women and children, but if you knock up a foreigner, you’re on your own.”

This administration is telling active service members that despite their service to our country, if their kids are born outside our border, even on US military bases, even if both parents are in the military, they’re not worthy of citizenship, and all I hear are crickets.

It just goes to show, they’re more interested in a whiter America than a just one.

Otherwise, there would be a significant public outcry coming from Fox, Sinclair, InfoWars, Breitbart, and the rest of the military fetishists and chicken-hawks.