Mr. President? Mr. Norris on the Phone and He Sounds Pissed

Radio: And now on with our Easy Eighties Pop Favorites…

Juice Newton: “Just call me Angel of the Morning, baby, just touch my cheek before you leave me…

Radio: Next up, the Georgia Satellites!

Georgia Satellites: “Don’t hand me no lines and Keep Your Hands to Yourself!”

The quote from the Current Occupant is that he hasn’t touched his face in over two weeks, just because. And NOT because the COVID-19 is serious or anything.

I think that’s something he learned from his new Korean BFF. You know how Kim Jong Il used to promote how he made like 11 holes-in-one in a single round of golf, bowled a perfect “300” game, and Superman crap like that? Trump is just throwing out these ludicrous claims, letting Rush Limbaugh and Fox “News” pass them on, and BANG, he’s a legend. There’s nothing he doesn’t know or can’t do.

I don’t know what the offspring, Kim Jong Un claims to be able to do. From the looks of it, he can claim that every year he wins the Coney Island Hot Dog Eating Contest in the afternoon and then each night goes out for pizza and beer.

Trump’s younger son, Twiddle-Dumber, just claimed 30,000 people heard his Pops speak at a recent rally… at a venue that held 8600. At this point, these people are so full of shit they might as well start repurposing Chuck Norris jokes.

“Donald Trump can get a woman pregnant by pointing a finger at her and saying “Covfefe!”

“Under Donald Trump's elaborate hairdo is another head of hair.”

“Donald Trump doesn’t read books. He stares at them until someone puts on Fox and Friends.”

“Donald Trump shot the sheriff on 5th Avenue, but he had Michael Cohen threaten the deputy.”

“All those names that appear on the screen after an episode of The Apprentice are not credits, just a list of people who Donald Trump stiffed on the bill for their services.”

“Donald Trump used Monopoly money and a Get Out of Jail Free card to pay off his loans to Deutsche Bank.”

OK, that last one is over the top. Trump doesn’t pay loans back.

Over the last few days, we’ve been treated to more and more bizarre claims from Trump, like contradicting department heads by saying there will be a vaccine in a few months (as opposed to at least 18), that he didn’t want a cruise ship with 21 confirmed cases of the virus to dock because the numbers would (make him) look bad and that no one could have foreseen the spread of this virus (besides all the other countries who have been taking aggressive action for months.)

I made the point last week that it almost seems like he’s trying to spread the virus, as a means of voter suppression, consolidation of goods, and cheap real estate. I just can’t see anyone being so inept and ineffective without it being intentional.

It just seems so bass-ackward. Why exacerbate a health crisis when you’re trying to curtail access to medical coverage? Every time he claims that if it weren’t for Democrats, he’d roll out the best health care plan ever, remember that the Republicans have not put forth a single comprehensive health plan. Their only actions have been to eliminate the portions of the ACA that they can get away with until they can scrap the whole thing. They have nothing to replace it and they’ve had 10 years to come up with something.

Wouldn't you just love to run into one of those guys who, when arguing politics, just keeps saying, "But how's your 401k doing?" They seem to be hiding out now.

It’s funny that for all the effort to use lies and misdirection to prop up the stock market, it’s falling off the table like Bloomberg’s campaign after his first debate. It’s almost as if people suddenly realized that Trump is out of his depth because a virus doesn’t respond to blustering, manipulating data name-calling, and pointing fingers, it just keeps spreading. Just like TLC reality shows. 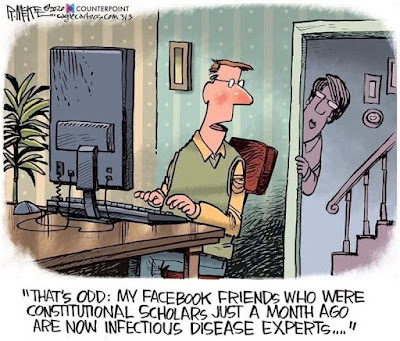 Or maybe we just know enough to listen to those who ARE experts in infectious diseases, rather than firing or gagging them.

Maybe if there were still some same voices in the room, our pandemic readiness might have been better. But Trump only hires sycophants and toadies now, who tell him nothing but that which he wants to hear.

Have you seen the new White House employment applications? 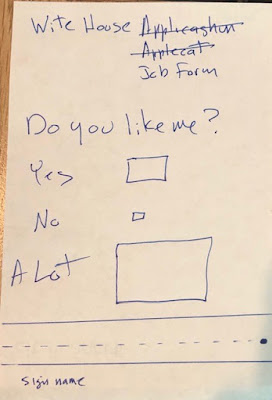 Interviews are being held in the cloakroom after 4th period.

Director’s DVD Commentary 1: In advertising, especially on radio, the “record scratch” sound is ubiquitous. Does anyone under 18 even know what that is or why it’s used? I wonder if they just think it’s some strange artifact from radio-land.

Cheech and Chong had a couple of epic “record scratch” moments on their albums, hence my use as a descriptor. One was when the “father” tries to turn off his son’s music on “Earache My Eye,” eliciting shrieks of protest. The other is the last track of one of their albums where “Man” (Chong’s “hippy dude”) tries to put on the “New Cheech and Chong album” and scratches it up so badly the record ends with a repeated skip.

Director’s DVD Commentary 2: If you’ve never heard of Chuck Norris jokes, I apologize for that middle section of the post. Each of those Trump jokes is based on (what I presumed to be) well-known Chuck Norris jokes. If I presumed wrong, please forgive me. (I suppose I could include the original jokes here, but then once you have to explain a joke, the moment is gone.)

Also, despite this post’s title, Mr. Norris would probably not be pissed about these Trumpian claims. After all, he is a devoted religious-right conservative. He’d probably want a taste of the gate, though.