I Swear
Last week there was a minor stir on the campaign trail when Joe Biden told a Michigan auto-worker he was full of shit (in response to having his gun rights position aggressively mischaracterized by the guy.) This immediately brought me back to 1972 and a similar dust-up in Michigan, only with George McGovern.

I was 11 and when I saw the clipping in the paper, I thought it was the funniest thing ever. In fact, I pressed it into a photo album I was making, which I still have and will lovingly display for you here today. 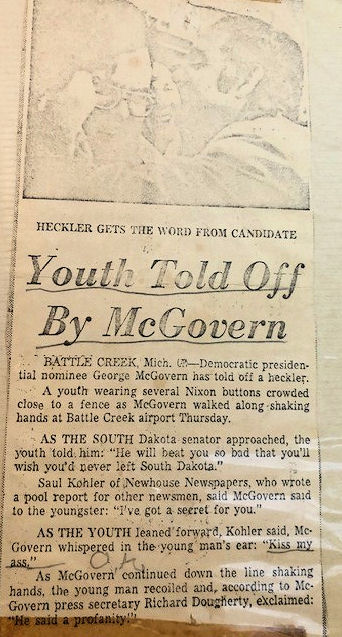 A youth told (McGovern), “He will beat you so bad that you’ll wish you never left South Dakota.”

McGovern said, “I’ve got a secret for you.”

As the youth leaned forward, McGovern whispered in his ear, “Kiss my ass.”

The young man recoiled and said, “He said a profanity!”

I hope this the only facet that will be shared by Biden and McGovern. Must be something about Michigan that makes a guy want to swear. (And as a former Ohioan, I have some pretty good ideas about what it could be.)

Republicans can’t make much hay out of this, not with the way their golden boy swears in public. Either way, this is the kind of thing to which I don’t pay any serious mind. It just amuses me. All I care about is what someone is going to do once they’re in office.

Truth Serum
One thing the coronavirus is doing is exposing where politicians’ priorities lie. For the Republicans, it brings their “Big Business” tendencies right to the front. Doesn’t it seem that every remedy the GOP supports is for the top end? And every solution for us working people, they oppose? 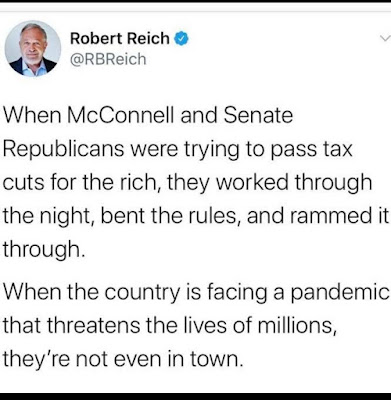 Like the payroll tax, for example. Sure, everyone would like a little extra cash in their pocket, but how does this solve the pandemic problem? That “little extra cash” is not going to pay for testing or treatment (IF you can even find testing). And people who are thrown out of work or have their hours slashed are not going to benefit from it at all.

BUT, weakening Social Security IS one of the long-range plans from the GOP, so they can commence with privatizing it and opening the money spigot to Wall Street.

Yes, it’s Still Racism
Did you notice how the conservatives are calling it the China coronavirus? Rahm Emmanuel may have said they should “You never let a serious crisis go to waste*,” but the Republican line might be, “Never pass up a chance to hang a racist smear on the enemy.”

They do this “China” thing the same way they always called him “Barack Hussein Obama.” And the rednecks always hit that “sein” part extra hard, so that you couldn’t miss that they were tagging the President as “Other,” as someone apart from themselves.

Which is right, I suppose. They were nowhere near as smart as he was.

*The oft-omitted rest of the quote: “And what I mean by that it's an opportunity to do things you think you could not do before.”

Poll Vaulting
While it’s nice that polling shows that Biden has a comfortable lead over Trump in a prospective matchup, please be aware that it doesn’t mean jack shit. Hillary had a big lead too, but the problem is that national polls are meaningless.

What are important are the state by state polls, because that’s how we elect presidents… state by state through the Electoral College. (Which the Republicans will NEVER give up because it’s their only means of winning the presidency, given demographic trends.)

So take national polls with a grain of salt. It’s nice to hear good things, but the devil is in the details. It’s more important for Biden to be ahead in Pennsylvania, Michigan, Ohio, Florida, or any of the other states that Hillary was supposed to win but didn’t.

Pork Barrel Politics
The spread of the GOP Coronavirus reminds me of all the possible-pandemics that came before, Avian Flu, H1N1, Ebola, SARS, and the lot. Back when we were all worried about the swine flu I found solace in this cute little graphic. 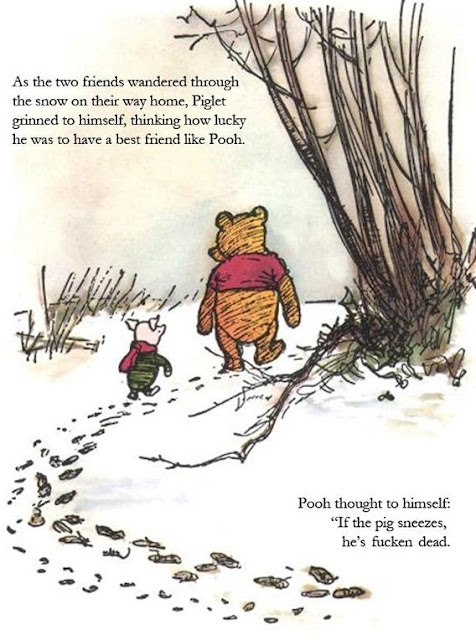 I think it’s getting to the point where hand sanitizer and masks aren’t enough. We have to go full-on Naked Gun. 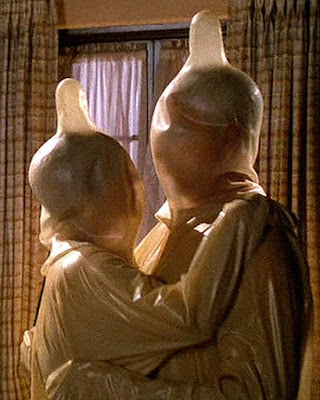 Debunkery
Speaking of cheap graphics, let’s look at some misguided Facebook memes, shall we? 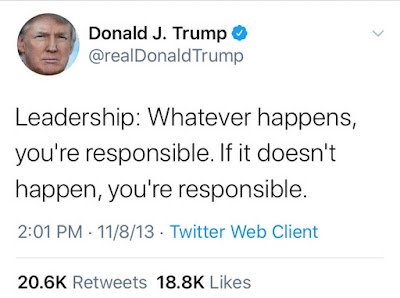 Oh, how things have changed in just 6 and a half short years. This, from a guy who won’t take responsibility for anything that doesn’t end up in ticker-tape parade in his honor. 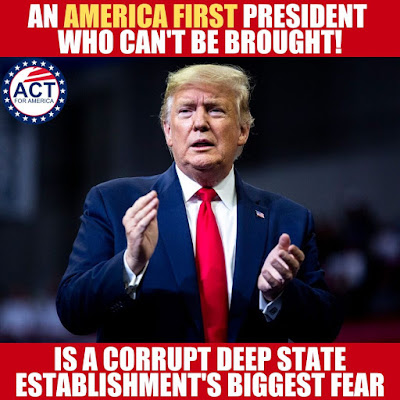 Are you fucking kidding me? His whole presidency has been for sale to the highest bidder. He never detached from his hotel business, he just pushed it to his sons for safekeeping until he returns. His administration has been a hallmark of self-enrichment, from foreign governments buying up entire hotel floors (without using them) to repeatedly bringing his whole staff and security entourage to his own golf resorts, spending more time golfing than any president in history, and billing the taxpayers for the whole thing. His daughter is cleaning up on recently granted Chinese trademarks. He pushes tax laws that directly benefit his hotel business.

Hell, Trump can be “bought” just by telling him how great he is. The creator of this meme is so removed from reality he probably thinks Trump’s hair looks good too.

Also, are we still pretending that the “Deep State” is a thing? The “Deep State” is a fever dream whipped up by conservative conspiracy theorists as an excuse/scapegoat for whatever they don’t like. Every administration is made up of staffers who agree and don’t agree with the president. Slapping a name on one set does not make it a thing.

With problems like these, it’s not even worth bringing up spelling mistakes. 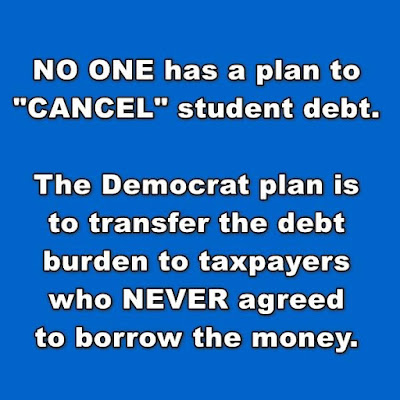 So, we’re saying that the taxpayers all have to agree with whatever the government spends money on? Great. Now they’ll never spend another dime because someone will always disagree. Or is it that only their side has to agree?

Look, the government spends billions on things most citizens wouldn’t agree to. For example, I don’t agree to spend money on energy company subsidies, Big Pharma subsidies, or abstinence classes. Why is eliminating student debt such a special area?

My theory is that this meme is designed to provide cover. If they just said, “We shouldn’t eliminate student debt because I’m not getting any of benefit,” it would just sound greedy and selfish from a party that claims to be the true moral center of the country.

Naked Gun was so funny, and that pic is perfectly perfect! Hugs, RO

Here's a fun video compilation of all the time mainstream leftists called it Chinese coronavirus and Wuhan coronavirus, a name that seemed more than fitting for them to use only a few weeks ago when CNN was saying it... but now that Orange Man Bad is using it, it's suddenly racist and offensive... right?

All three of the Naked Gun movies are among my favorites. Guaranteed belly laughs in each one.

That was probably from when the virus was only in China, which would have made sense. But do you know what a White House official called it today,to an Asian reporter? Kung Flu. I'm sure that was just their nutty sense of humor, and not at all racist.

America's first president who can't be brought? Brought what? A healthy snack? That sentence should read bought. Even the right wing memes show a distinct lack of smarts. And seriously, that a-hole is absolutely 100% for sale. Lining his pockets is his only priority. He turns to racism looking for someone to blame and his moron followers fall in line.

It's Monday, so I thought I'd stop by to see what's new over in B-more. Hope you and Sweet Pea are doing well. Hugs, RO

We're good here. I've been working from home since 3/12 and Sweetpea's school has been closed since 3/16, so we've been bumping around the place together. Which is nice. It's good to have company when you're in "isolation." We're both fortunate that we're financially stable. I'm able to continue working, and school will have to start up again... eventually. At some point parents will have had enough of their kids and need to send them somewhere!