When They Show You Who They Are, Believe Them

Last week the Republican Senate put their American Values right out there for all to see, when passing the most recent coronavirus relief bill. This says it best: 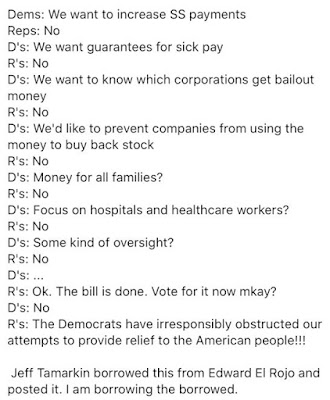 Eventually, the Democrats were able to get some language added that would provide some accountability and guidance to the $500b corporate slush fund, so whoever received these funds had to be made public and there were restrictions in place to prevent companies from using it for bonuses, stock buy-backs and the like.

Then when the Current Occupant signed it, he issued a signing statement saying he was not going to enforce any of the slush fund restrictions.

You tell me, why is it so important for anonymous companies to receive billions of dollars without restriction or transparency? To be clear, this $500 billion is about half of the entire relief package. And it all goes to companies who can do whatever they want with it and we will never be the wiser.

And those are the same companies who took the giant corporate tax cut savings and used it to pad their bonuses and stock prices, without doing jack for its employees. In other words, they ate their two weeks’ worth of quarantine food on Monday and now they’re complaining about being hungry on Wednesday. Screw’em. They could have strengthened they’re company’s readiness in advance, like many of the big banks did.

After the 2008 recession, major banks were required to have x-amount of dollars tucked away in reserve, to handle future recessions without needing another bailout. Granted they were forced to do that, but it was the right thing to do. Other companies could have done the same, especially after the trough opened up last year with the tax cuts. But they went the route of executive enrichment and a better short-term P&L statement.

In a truly fiendish vein, some Republican politicians and Fox “News” hacks have been pushing the idea that we should let the old people die so to not sink the economy. It’s a good thing. Seriously.

This is where the Family Values people are? Bump off the grandparents so that the 1%ers still get their dividends? That’s so insane. But it shows us exactly what Republican “Family Values” are: To hell with YOUR family, I don’t want MINE to be inconvenienced. The only thing the ruling class Republicans value is the almighty dollar. Everything else (like social issues, racist immigration policy) is just a way to get enough people to vote for them so that they may continue to pursue unrestrained wealth.

I join with a chorus of others, who say, “If you want to sacrifice the old to spare the profits, YOU GO FIRST!

When cruising Facebook on Saturday, I saw someone post a meme about how Congress should forget about the giant anonymous slush fund for corporations and send the people their $1200. Which is fine, but later that same afternoon, I saw the same person post another meme telling people “Come November, remember that Virginia’s two senators voted against the coronavirus relief package.” Which they did because it had that giant, anonymous slush fund for corporations. Unbelievable.

I still see my conservative friends trying to defend the president’s actions regarding the virus. They can’t believe why the media would ask about the gargantuan fuckups from January onward, (“It’s a hoax, it’s not serious, the flu is worse, it’s China’s fault”), before the big U-Turn into “OK, maybe it’s serious.” Completely unnewsworthy. They’re probably just taking their cues from the White House where media criticism continues to flow forth unabated to anyone who dares suggest their hero might have done something an eensy bit better, to prevent the clusterfuck we are now entertaining. 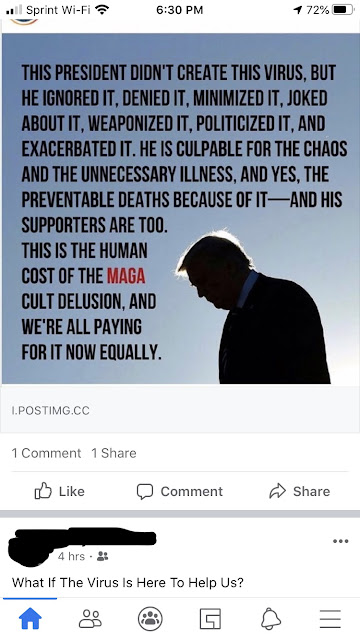 As you can see, there are two opinions, the correct one and the appalling conservative one.

I feel bad for the poor governors he is now quarreling with because they were not grateful enough for his day-late-and-a-dollar-short pandemic response. Like a petulant child, he’s holding up supplies from Michigan, New York and California, who he thinks “hasn’t been nice to him,” and showering Florida with everything they need. Maybe they need to update the White House Application form I unveiled a couple weeks back. 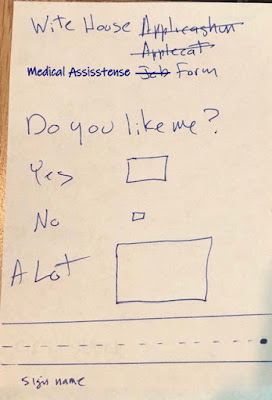 People love to complain about all the non-pandemic-related items ended up in the relief bill, but it seems these people have never seen a bill become law before. You can go back across the last 50 years and find that there are extra items inserted into bills just about every goddamned time. For better or worse, that’s how the sausage gets made.

“You want this, you have to give me that.”

You want a $500 billion slush fund for your rich friends? We need movement on mail-in voting. Pelosi is no dummy. In order to allow the slush fund, she needed something that was just as painful for the Republicans to give up. Regardless that it is an antidote to the danger of massive crowds gathering on voting day, mail-in voting goes against every voter-suppression strategy they’ve rolled out since SCOTUS defanged the Voter’s Rights Act. Today, Trump said it himself on Fox and Friends, “They had levels of voting that if you ever agreed to it you’d never have a Republican elected in this country again.”

Our Republican president: Friend of Democracy*

*As long as it’s only well-to-do white people and racists voting.

And what is the Republican answer to so many Americans who don’t like their policies? Do they try to reach out to see what’s important to them? Do they propose things that make their lives better, that they could use to seek their vote? Of course not. They just try to keep them from voting.

What’s supposed to be the big deal is the $1200 checks. I just wonder what they’re going to do the next month after the money goes out. It’s not like $1200 is going to go very far. I figure that’s one rent or mortgage payment and some groceries, if that. (Which is heavily depending on where one lives). What about the next month?

I can just hear the Republican Senators bemoaning how the lazy people just squandered their first check so they can ask for more. Again, these guys are ghouls. Racist, country club, fucking ghouls.

At least King Dipshit backed off his Easter Return promises. Someone must have tied him down and forced him to listen to reason. (I’m sure it wasn’t Pence.) But isn’t it funny how he always has to be pushed into doing the obvious “right thing.”  And again, always too late to get the maximum benefit. He’s the poster boy for closing the barn door after the horses have run free.

This is just what happens when your first and strongest instinct is to promote, insulate, and enrich yourself at the cost of millions of others. Millions about whom you don’t give a flying fig.
Posted by bluzdude at 6:52 PM

That quote (title) in singular form by Maya Angelou is perfect for lots of situations, and sadly most of us still fail to believe it's true. Sending an arm hug to you and Sweet Pea. RO

I love that quote. Spot-on.