Pets Are so Helpful in the Time of COVID

Director’s DVD Commentary: This is an “Easter Egg” post; just a little something apart from my usual posting cycle, but I’m throwing out there for anyone who may stumble upon it.

As you may have seen, I’ve written before about our (Sweetpea’s) yellow lab. They say it’s a comfort to have pets in the Time of COVID, but I’m not so sure. They certainly inject a note of unpredictability into our lives. Like this morning.

First, I need to tell you a few things. As is typical for a lab, this dog is a 90-lb eating machine on paws. He’s completely motivated by food and food alone. It doesn’t even matter what it is. He will scarf down a bowl of sawdust with as much gusto as a bowl of filet mignon.

These are the things he cares about, in order:
1)      Food.
2)      Tie between Ballgames and Mommy, (who no doubt holds this position due to being the prime supplier of the food and ballgames.)
3)      Everything else.

I know food is number one because one time when I got home before Sweetpea, (back in the days when I still went to the office), I fed the dog and as he was eating, she came home. He never budged. His tail started wagging, so he knew she was home, but he never went to give her his customary licking and wagging welcome until the bowl was empty. 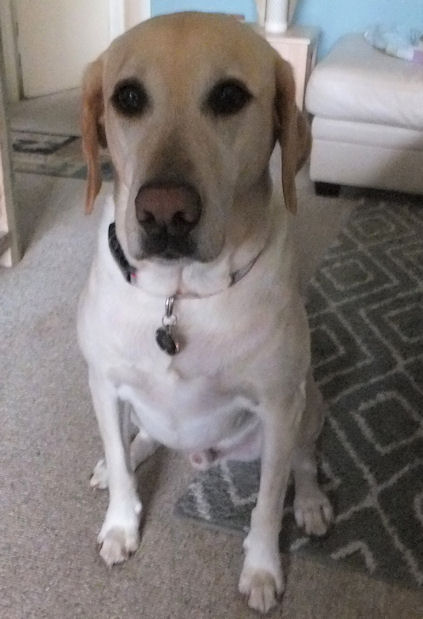 But “Miss B” is a whole ‘nother category unto herself. Miss B is a friend of Sweetpea’s, from around the corner, and the dog completely adores her. He goes bananas any time she shows up at the door and barks until she plays ball with him. Sometimes she goes with them on their morning walks.

They were out walking and she noticed our neighbor’s car window was rolled down and she wanted to knock on the door and tell them so their car seats wouldn’t get soaked. So she asked Miss B to hold the dog’s leash. The neighbors didn’t answer but when she came back to Miss B, she said she was showing the dog that she didn’t have any treats in her pocket, just pennies. (She usually carries treats for the various dogs along their route.) When she held them out in her hand to show him, the dog came to investigate and snarfed them up.

So Sweetpea got on the phone to her vet’s, who told her to bring the dog to the pet emergency room, and off they went. She delivered the dog but then had to wait in the car.

It wasn't until she got the dog into the ER that she realized she was wearing one of my old tee-shirts... This one: 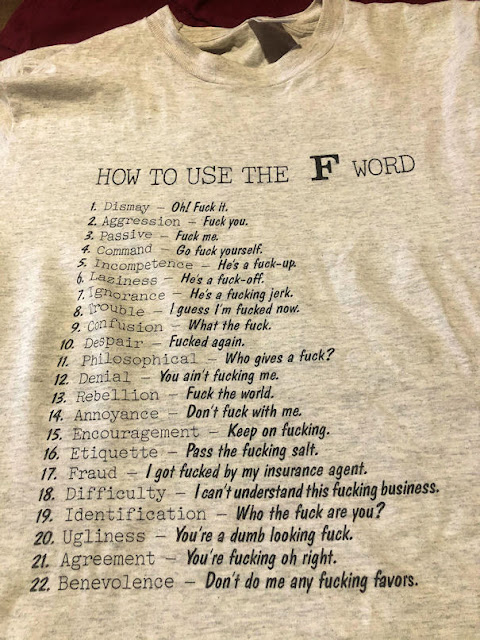 (Ordinarily, Sweetpea needs no further direction on how to swear like a sailor.)

Because she got him in right away, the first thing they did was make the dog throw up. When he did, they saw that there were no pennies contained therein. Next step was to do an X-ray. Again, no pennies were found. They said a swallowed penny always shows up on X-ray, ergo he must not have actually eaten the pennies. So that’s good news. Also, that’ll be $391.

As soon as she got home, Sweetpea went out to where it all happened and came back with the three pennies, which she found right there in the grass.

Good thing we’re both still gainfully employed or that would have been be quite a pill to swallow. But it’s especially ass-chapping that not only should Miss B have NOT held out the pennies like they were treats, to a known eating machine, she assumed the dog had swallowed the pennies. He probably licked them out of her hand, or spit them out after getting a taste. He does the same thing with olives, the only food substance he refrains from eating.

Can Congress pass a relief bill for that? They should at least make it tax-deductible.

The moral of the story: Let the neighbors worry about their own car. . 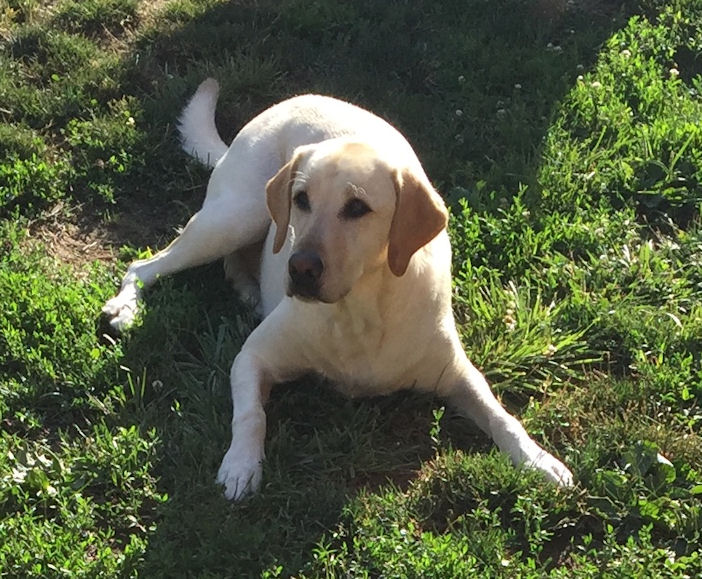 Director's DVD Commentary: The side-issue regarding my baby's "wardrobe malfunction" was added the day after publication. I meant to include it in the first place, but I forgot about it while I was writing.
Posted by bluzdude at 5:01 PM

And with the coin shortage, they may be even more valuable than that!

With the corn shortage that I still haven't figured out(lol), every little bit helps. I know that the beautiful dogs have been known to eat almost everything in site. Years and years and years ago, I had Lab who as a puppy didn't mind chewing on my favorite shoes or gnawing on the edge of the brand new pool. I tried to cover up those corners with felt, but my husband caught on when he returned from a overseas trip to Guam.(lol) OMG - that shirt truly has me laughing out loud!!!!! That would be the perfect gift for a friend, and I need to see if I can find one. Happy Sunday to you both. RO

We're lucky in that he usually confines his chewing to food or his toys. Or if he wants attention and steals something of ours and we still don't pay any attention, he'll tear it up and look at us like, "Hey, I warned you."

The dog is a magician. Where did the pennies go? They disappeared!

Usually, he only makes food disappear.