Cuing Up the Next Civil War

Remember early on in this Administration, the common thought was that Trump regularly committed outrages just to divert attention from the prior outrages, so there would be so much out there, no one knew where to turn first?

I feel like it’s kind of like that now, only larger. It’s not just little things like he’s violating the emoluments clause, or asking the Russians for opposition research, but now he’s allowing tens of thousands of innocent Americans to be killed, stoking nationwide protests that haven’t been seen since the 60s, and forming a private army with the express purpose to violate the 1st Amendment rights to free speech and assembly.

If ever there was evidence that what political leaders say matters, it’s his denial of the seriousness of the coronavirus and denunciation of wearing masks. Once he put that out there, “his people” have been using it as a rallying cry to “defend their rights” and spread the infections farther and faster. 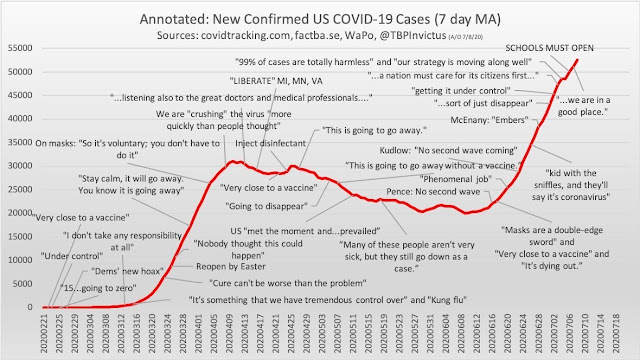 I’ve seen the meme that says that if Hillary were president, we’d all be eating in restaurants and going to ballgames by now. I don’t think so. Hillary would have been like Round Two of the Obama Administration wherein whatever she said was opposed and denounced by the Right, and wearing masks would have been one more example. Trump and the others of the radical right, along with talk radio and Fox “News” would be in lockstep, decrying any kind of mask mandate as federal overreach and tyranny. (Just like they are now.) But it would be even worse because it came from her. Can’t you just smell the misogyny?

The initial impressions were so strong that now, even after Trump reversed course on masks, his followers still tow the original company line. It seems like they’re ready to ride that horse right up until the moment they catch the ‘Rona themselves, and then release an “Oops, my bad” statement.

Or maybe they don’t trust what he’s saying now because they know he’s only reacting to the polls, which overwhelmingly disapprove of his handling of the outbreak. And they’d have to admit they were wrong, which you know will never happen.

It’s finally coming to pass that the anti-education and anti-intellectualism that Republicans traffic in is now killing people.

They deny the science, which has been established for decades (regarding how to mitigate a virus), they deny the media reports as “hype,” deny the body count because they were told (by Fox, talk radio and some schmo on Facebook) that the counts are inflated, they promote idiot conspiracy theories that either China or our own renowned infectious disease expert created the virus to unleash on America, just to damage Donald Trump.

I think Joe Biden should contact Dr. Fauci and tell him to speak his mind at all times and that no matter what sanctions this Administration imposes in retribution, he’ll get his job back on Day One of the Biden Administration. Of course, to do that, Joe’s got to be confident he’ll be able to overcome Republican voter suppression actions already in place, plus other general fuckery expected to be unleashed in the next three months. Good polling only goes so far.

Trump is already screwing with the mail, to create doubt as to the security of mailed ballots. The GOP is creating a team of 50,000 people to become “poll watchers,” allegedly to “fight fraud,” (which no one can prove exists), but in reality to harass and intimidate voters, especially those who look foreign. How much do you want to bet that these “poll watchers” look and dress an awful lot like those “police” in Portland?

I think his and Barr’s creation of a private army for the Bible Stunt felt pretty good to the president. With this hand-picked army, there’s no messy chain of command issues or petty Constitutional problems to worry about. He has a privateer army made up of sociopaths and miscreants from ICE and Border Patrol, with a smattering of prison guards, who are used to not seeing other humans as “people” and love nothing more than to gas these “animals” and crack some heads.

I think the problem with this personal army is going to get much worse before it gets better. He’s plainly stated that he plans on using it exclusively in cities run by Democrats. Funny how he never sent anyone to those State Houses where heavily armed white men shouted as lawmakers and local police officers because they wanted to go Hair Cuttery and the gym again.

But in Portland, his un-labeled army gasses mothers, charges and beats medics who are treating people, and have performed countless acts of savagery toward people who are exercising their Constitutional rights.

Right-wing media always shows the people attacking fences, throwing rocks or yelling at Donnie’s Militia. They completely ignore the hundreds of recorded atrocities like this. I once posted a link roster, on Facebook, of over 700 videoed instances that showed jacked-up police or these Portland thugs attacking unarmed civilians. All my conservative friends would do is argue about side issues. Not one would even mention the evidence I put under their noses. And I regularly see them grumble about the Portland “lawbreakers.” If they don’t see it, they’re not responsible for defending it.

It's sobering to think that if the original Rambo movie, "First Blood," were released today, 40% of the audience would be rooting for the cops.

That’s your modern Republican… they love America so much they completely reject the 1st Amendment, unless it’s their own people. (The 2nd is sacrosanct, of course. When their opponents show up with guns, their answer is “more guns.”) 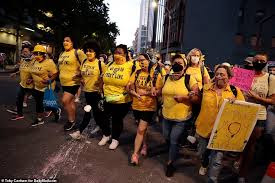 Republicans: “Gas them. They deserve it.”  (Source: Daily Mail) 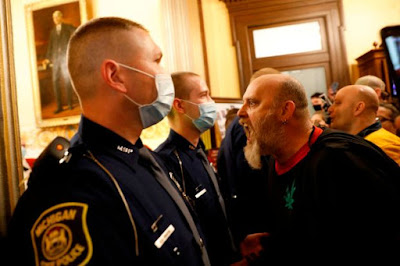 I keep reading that local Portlanders say the protests were basically dying off before the Trump Army showed up. Maybe to continue that trend would take the wind out of their sales. What if someone threw a riot but no one showed up? Civilized protesters will never win against a heavily-armed and unrestrained military force. Nor will uncivilized protesters. Like we learned from the WOPR computer in “War Games”, the only way to win is not to play the game.

Sure, Trump may keep a force on the ground to prevent recurrences, but at least that’s a bunch of troops who aren’t gassing people elsewhere.

Ultimately, the best tactic is to vote every one of these bastards out. And then once we have a Democratic Senate, pass a law that prevents a president’s personal army from going to war against his own people.

Then again, I take that back. We better wait until we know a Biden Army won’t be necessary. I can definitely foresee a time where these jackedbooted Trumpies refuse to follow their leader back to the fringe. They’re going to want to fight it out, now that they have a taste for it. We may need an army of our own.

And thus does the country split itself apart. 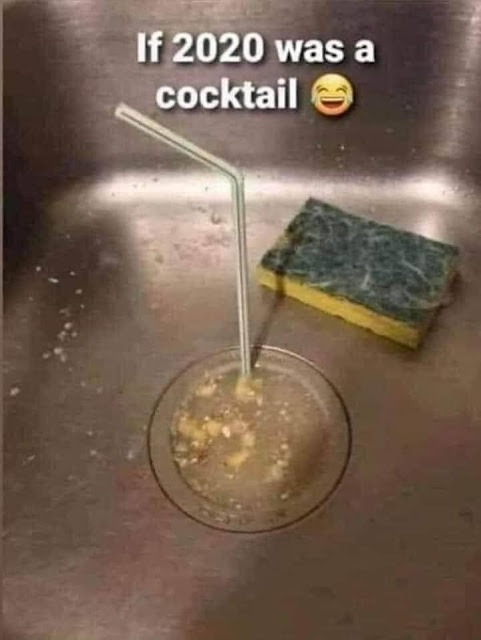