One of Sweetpea’s family members sent her the following email, detailing all the alleged successes of the Trump Administration, with smarmy, condescending commentary questioning why she would dislike a man who provided such obvious triumphs. We could see it was a “forward,” not something her relative wrote, and she asked me if I could take a look and come up with some rebuttals. Thankfully, that’s right up my alley. The original email is in red, my comments are in blue.

Because it’s long, I’ll break it up into two parts. Here’s part one; I’ll try to post the rest sometime midweek, which will contain “closing arguments.” I have no intention of merely playing defense.

Well, tell us — what is it about him that you dislike?

Do you dislike that he directed the brokering of the first meaningful Mideast peace deal in decades?

A peace deal between two countries that weren’t at war (or even in conflict). Not meaningful in the least; all photo op and resume padding.

Do you dislike that he made cruelty to animals a felony? Or don’t you care?

The PACT law was a bipartisan bill that passed overwhelmingly through Congress. Trump signed it rather than vetoing it like any reasonable person would. No kudos for doing the obvious thing. I’m sure this will come up a lot. The President signing a popular bill that he wasn’t involved with writing or having allies write is not what I’d call an accomplishment. It’s meeting the minimum expectation of the job. Not to mention, he is the first President in over 100 years not to have a dog in the White House. (The last one was McKinley, who died in office in 1901.) So, no points for being a warrior for animals.

Do you dislike that he earmarked billions to stop the opioid crisis?

Trump didn’t earmark anything. Funding resides with Congress and they included $6 billion in the 2018 and 2019 fiscal budgets. Deaths caused by opiates continue to rise.

He destroyed ISIS, killed countless terrorists without going to war (even though everyone said we’d be in World War III by now), and kept the peace. Do you dislike that?

Operations against ISIS were ongoing before he took office. The military continued to hunt ISIS and kill its leaders under his watch. They’ve lost their territory but are still a threat. Then he pulled troops out of any area that it’s beneficial to Russia to have us gone and abandoned our allies, the Kurds, leaving them to be slaughtered by the Turks. This was against the recommendations of the Joint Chiefs.

Does it bother you that we’re now energy independent and the largest producer of energy in the world?

Trump has done nothing to enhance our energy capability, other than put barriers in front of solar and wind power development. Trump, like Bush before him, is beholden to Koch Industries and the fossil-fuel industry. This is a group who is behind Republican’s climate denialism and is catapulting us into the current climate change debacle, in the pursuit of short-term profit. Propping up oil and coal is short-sighted and destructive.

Do you dislike him because he started to build a wall to keep criminals and drugs from coming into our country and because he respects, honors, and defends our country’s borders?

The wall is a joke, a wet-dream for white supremacists and Trump latched onto it as a campaign issue. It's not even an effective barrier. Any wall can be breached, tunneled under, vaulted over, or run around. Video shows a $100 electric saw cutting through the wall with ease. Sections of the wall he had built or refurbished are already falling down. We don’t need a wall to defend our borders, just a sane immigration policy that actually allows people to immigrate. The wall is a national embarrassment, an emblem of blatant racism for all the world to see. It diminishes us as a nation.

Do you dislike him because he just slashed the price for prescription drugs (In some cases by 50%) which is driving Big Pharma nuts?

Trump signed 3 Executive Orders (EOs) regarding drug prices, which are meaningless without other bureaucratic steps and changes to be enacted. There has been no statistical dip, (let alone a 50% drip) to be seen. (Certainly not in MY maintenance drug bills.)

Do you dislike that he met with the leader of North Korea, averted war with that country, and brought a halt to their aggressive missile testing? Was that wrong?

That would be great if it were true. But North Korea is still in possession of all the nuclear tech they had before. Trump gave them the place they craved on the international stage and got nothing in return but empty promises. Yes, that was wrong.

Do you dislike that he signed a law ending the gag-order on pharmacists that prevented them from sharing money-saving options on prescriptions?

Trump signed a bill driven by Sen. Susan Collins. The caveat is that the customer has to ask. The pharmacist still cannot bring it up to the customer. Again, it’s an action someone else pushed for which he wants to take credit.

Do you dislike that he signed the Save Our Seas Act which funds millions per year to clean tons of plastic and garbage from the ocean?

Another bipartisan bill created in Congress that Trump signed. He didn’t ask for it, he didn’t push it, he just signed it when presented. Again, the minimum expected of a president.

Do you dislike that he signed a bill for airports to provide breast-feeding stations for nursing moms?

Trump approved the 5-year renewal of the Federal Aviation Administration Act. The breast-feeding station detail was added by Sen. Tammy Duckworth, D-IL. Do you like that Trump supporters consistently seek to give him credit for work done by others? Do you care?

Do you dislike that he signed the biggest wilderness protection and conservation bill in a decade designating 375,000 acres as protected land, making him the most significant conservation president since Teddy Roosevelt?

This is highly misleading. While he did sign the John D. Dingell Jr. Conservation, Management and Recreation Act of 2019, he has stripped protections from far more land than he has preserved. Most notably, he removed some two million acres in Utah that had been part of the Bears Ears National Monument and the Grand Staircase-Escalante in Utah. According to a study published in May 2019 in Science, he is responsible for the largest reduction in the boundaries of protected land in U.S. history.

Does it irk you that he loves America, and puts Americans first? Is that the problem?

This is a child’s argument. Loving America isn’t a rarity in either party, even though they may disagree on how to show it. “Putting America First,” however, is a code for isolationism, which is popular among those who don’t know how global economies work and those who hate foreigners. No country can wall itself off from the world and expect to function efficiently.

Do you dislike that he made a gay man the ambassador to Germany and then asked him to clean up national security, declassifying as much of it as possible for transparency?

This is only partially true. He did appoint a gay man as ambassador to Germany, but his task was to lobby countries to eliminate laws persecuting LGBT people. The “stick” in this instance is that the US may refuse to share intel with countries that prosecute gays. But it’s funny that when asked about this very effort, Trump had no idea what the questioner was talking about. If he doesn’t know what it is, how can he be given credit for it? Also, add to this that his administration continues to press for the overturn of the SCOTUS Obergefell ruling that allowed for same-sex marriage. Plus, he appointed a VP who is personally and professionally dedicated to discriminating against gays under the guise of “religious liberty.” Trump gets zero credit for anything that makes gay lives better.

Do you dislike that he works for free, donating his salary to a different charity each quarter?

This is a joke, a PR stunt. Yes, when pressed, he eventually comes up with a charity to donate his Presidential salary. That’s $400k per year. Do you know how much it costs the American people for his golf trips? The estimated cost of his golf trips, to his own properties I might add, is $103-105 million, as of July 2019. The $400k is couch-cushion money, compared to traveling on Air Force One and housing his security detail, with the money going to his own company! If he were to be reelected, eight years of his golf trips would cost the country $340 million. Donating a dime and stealing a dollar does not a generous man, make.

Do you dislike that his economic policies have produced the lowest Black unemployment rate ever?

What policies are those? All he’s done on the economy is ride on what Obama started and stay out of the way. 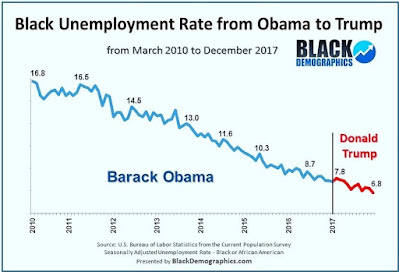 The only economic policy for which he gets credit is the massive tax cut bill of 2017, which was overwhelmingly weighted towards the rich. The lower and middle class got a few crumbs and the rich took the rest. Another reason Black unemployment is lowering is that people often need several jobs just to make do, because of Republican wage suppression. The federal minimum wage is $7.25 and hasn’t changed in 11 years. And of course, his mishandling of the Coronavirus has resulted in the disappearance of millions of those jobs.

Do you dislike that he produced the lowest Hispanic unemployment rate ever?

See the answer above on Black unemployment.

Do you dislike that he listened to Senator Tim Scott and created opportunity zones to help minorities?

This was included in his major tax cut bill. Experts disagree on whether it will actually benefit low-income communities or just developers. Details include huge tax breaks for real estate developers, just like you’d imagine Trump would prefer.

Do you dislike that he passed prison reform, which gives people a second chance and has made quite a huge difference for minorities in particular?

Good bipartisan bill passed by Congress, ushered by Jared Kushner to his FIL for signature. What you never saw was Trump out there going, “Damnit, get me a prison reform bill to sign!” If a Democratic Administration has passed this law, I guarantee Trump and the Republicans would be posting ads about how the Democrats are emptying the prisons and endangering innocent lives.

It's ready and waiting for you.