Sometimes, just when things seem so dark and depressing, you seriously consider putting your face in a fan, something comes along to lift your spirits right out of that downward spiral and back into the days of wine and roses.

Thursday night, Trump announced that he and the Mrs. had the ‘Rona. I reacted thusly:
It’s not that I want him to die; I totally don’t. I want him to live long enough to fully experience a lengthy prison sentence. Although I wouldn’t mind if he got to experience a ventilator. At least we wouldn’t have to hear him speak.

Not that I think he’s actually going to prison. Well-connected rich* guys, let alone former American presidents, don’t normally go to jail. So I’ll settle for his living under a cloud of derision and humiliation for the rest of his life. If he wants a hit of adulation, he’ll have to go where his fans are, in Possum Holler. He won’t even be able to get decent cell phone reception there.

*"Rich” being "not exactly what he says he’s worth but still a lot more than me."

And Trump being Trump, he can’t even get sick with dignity. He had to get his fix of idolatry by forcing a Secret Service detail into an air-tight car with him for a quick spin. If any of those guys get sick, they should totally press charges or sue or something. These guys have agreed to take a bullet for him, but he’s not supposed to be the one doing the shooting.

Aw geez, do you think Trump farts on purpose in there, just to gag out the rest of the passengers? With his diet, I wouldn’t doubt it.

And then to make this thing even more karmically satisfying, a bunch of his entourage got it too. Wife, Kellyanne, a couple of Republican senators, Hope Hicks (aka the Future Mrs. Trump), Chris Christie…

Some may think it’s bad form to celebrate the illness of another. I normally wouldn’t, except that these dipshits all purposely downplayed the seriousness of the virus, mocked the efforts of those trying to prevent the spread, sowed medical misinformation to muddy the waters, and turned a health crisis into a political issue, which created the state of emergency we’re still in long after every other developed country who took effective action has moved on.

They made this shit sandwich, now they can take a bite.

Rockin’ the Vote
Sweetpea and I received our mailed ballots last Thursday. We’d requested them online back in August and they started to mail them out on 9/24. Despite the initial look at all the material… 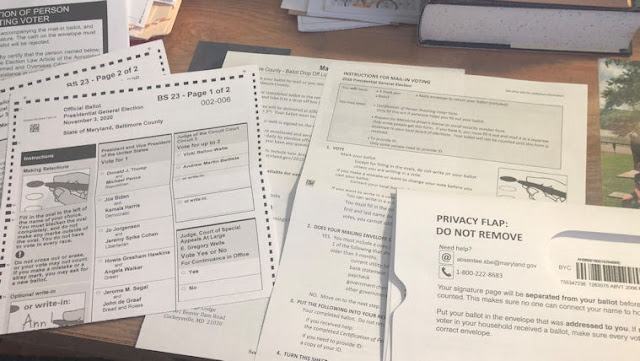 …it wasn’t very complicated at all, not where we are.

All we had to do was fill in the dots, not make any other marks, sign the envelope, and done. I’ll have to give Maryland credit; the voting process here is straight forward and easily available to all. They also have something like eight days of early in-person voting.

Rather than mailing, we took our ballots to a nearby drop-box last Saturday. 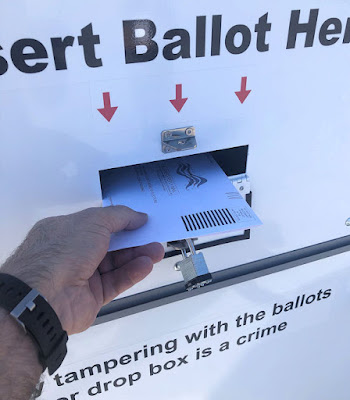 Unlike Texas, our county has 13 different drop-box locations.

I got an email this morning saying that they acknowledge receipt of my ballot, so I know the box has been emptied.

This is how you do a free and open election. Bastards like the governor of Texas are a threat to democracy. Limiting drop-boxes to one per county? That’s insane. And there’s no tangible benefit other than making it harder to vote. That’ it. They WANT there to be long lines during off-work hours, to discourage hourly workers from showing up. It’s disgraceful and goes against what this country is supposed to stand for.

I worry about the drop boxes though. I hope they have surveillance cameras focused on them. After the election, I’ll share a thought I have about them that I don’t want to mention now, lest I give someone ideas.

Now let’s look at a few dumbass Facebook comments, shall we? 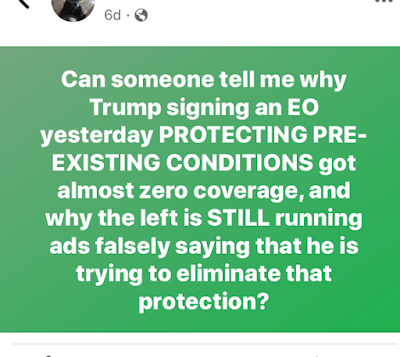 Sure, I’ll tell you why. It’s because this Executive Order has no power over private insurance companies. He can sign whatever he wants for the photo op but it doesn’t carry enforcement powers like a bill passed by Congress does. You know, like the ACA used to until the Republicans in Congress gutted it. And now, as all this is going on, lawyers for this Administration are arguing to the Supreme Court how the rest of the ACA should be scrapped, including pre-existing conditions, smack in the middle of a pandemic. There’s nothing remotely false about that.

And yes, there was media coverage too. That’s why we know about it. What you didn’t see was a celebration, because people who understand how the government works know an empty gesture when they see one. This EO is political theater.

Once again, the Left is right and the Right is wrong. 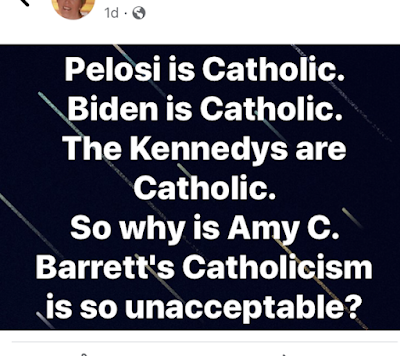 I can’t believe you ask that with a straight face. You know why this “Catholic” is objectionable. And I’m going to ignore the ongoing objectionableness of her nomination being rammed through during an election and just focus on the Catholic part.

She’s not just a Catholic, she belongs to a particularly stringent and misogynistic sect of Catholicism who promotes male domination of the world and household and the subjugation of women. And just recently, they scrubbed any mention of her from their website, so she won't be tied back to them. They actually know how odious their views are to the rest of the country. That’s why. But you knew that when you wrote the post. And it’s funny how you only mention Democratic Catholics.

You might want to acknowledge that there are currently five Catholics on the Supreme Court, four of which appointed by Republicans. So on a separate note, one could say that there are already entirely too many Catholics on the bench right now. Catholics make up 20% of America but 66% of SCOTUS, counting the new one. And the reason that this one was selected was that she’s hardcore about it and willing to overturn Roe v Wade, the ACA, and throw the election to the incumbent.

How do I know this? If she wasn’t, she wouldn’t have been on the Federalist Society’s judges list from which this Administration is pulling nominees. That’s what they stand for, so regardless of what she says in her confirmation, she’s a sure vote in those areas. And if that proves not to be true, well then she just pulled the biggest con on Washington since this clown-in-chief took office.

And now let’s hear from a know-nothing Hollywood actor: 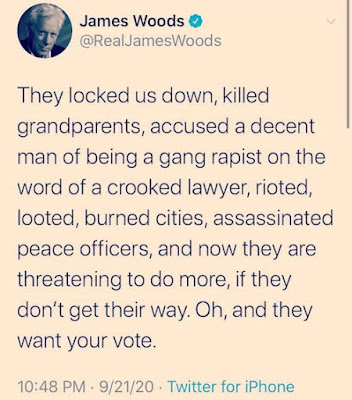 Once upon a time, you knew it was just an acting role when you saw James Woods acting like an asshole. So much deception is such a small space… Let’s parse this one:

“They locked us down…” I think you misspelled, “They saved millions of lives.” This only proves that some people need to be told how to behave because they’re too stupid not to hurt themselves on their own.

“Killed grandparents…” You’re confusing “them” with Republicans who flouted quarantine and masking protocols.

“Accused a decent man of being a gang rapist on the word of a crooked lawyer…” I can only assume that he’s talking about Trump and Michael Cohen. In which case, “decent man?” (Please play the embedded video above.) Keep in mind that the “crooked lawyer” is Trump’s crooked lawyer, working at his behest as a fixer. He knows everything his boss was up to. If he’s crooked, it’s because his client asked him to do crooked things.

“Rioted, looted, burned cities…” Basically, three ways of saying the same thing, but just saying “rioting” isn’t as visually or aurally satisfying. Just remember, it wasn’t for nothing that people were protesting. If cops were rounding up actors on sight and treating them like Black Americans are treated, SAG would be in the streets or hosting telethons right now. Also, you can’t discount the effect of white nationalists and #ProudBoys (giggle) on stoking violence out of peaceful protesters.

“And now they are threatening to do more if they don’t get their way.” “Their way” about what? Not wanting to be executed over misdemeanors and traffic tickets? Yeah, that’s a legit gripe. There’s no greater reason to protest in 2020 than that.

“And they want your vote.” Damned straight we want people’s vote. Watching a minority maintain its grasp on the levers of power year after year and using them to their own benefit gets tiresome. You know what happens when you squeeze something long enough?

It explodes.
Posted by bluzdude at 5:41 PM