I decided to watch the big 60 Minutes interviews with the presidential nominee teams last night, curious about how bad the Trump train wreck was going to be. (Spoiler: it was the Flaming Boxcars Full of Manure Plunging off a Cliff kind of bad.)

I was supremely irritated right off that bat, with Trump’s recoil at the prospect of hard questions and imploring Lesley Stahl to “keep it fair.”

Whenever I hear that phrase, I always think of Rodney Dangerfield in Caddyshack, greasing the game referee, telling him, “Keep it fair, keep it fair,” as he stuffed some bills into his hand with the hope of receiving some favorable rulings later on. 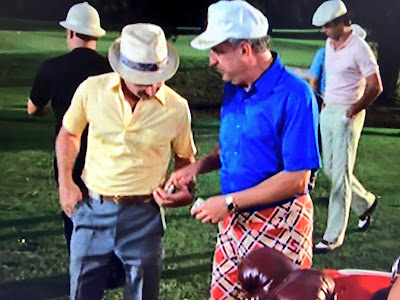 I think Trump is too cheap to actually part with the money necessary to bribe anyone but he still expects to receive every break. As a binge-watcher of Fox “News” and OANN, I’m sure he thinks that’s what journalists are supposed to do, lob softballs and fawn over his answers. He certainly doesn’t expect to be challenged on what he says. He never seemed to grasp that if you don’t dodge, exaggerate, or lie, journalists are more likely to accept your answers.

He’s so used to having his way in life and business that sees that any challenge to his word or expertise is blatantly unfair. He surrounds himself with sycophants and “Yes-men” so that no one tells the Emperor that he doesn’t have any clothes on. He thinks fairness is getting every advantage, every bounce, and every round of applause.

That’s why he calls every journalist who questions an answer or moderator who insists on getting a question answered “unfair,” or “nasty,” or “mean.” He doesn’t understand that it’s the job of journalists, especially political journalists, to press those in power and push back against misdirection and vague or exaggerated answers.

That’s something that Fox “News” never does unless they’re interviewing a Democrat.

And believe me, there was plenty to push back on from Trump last night. According to CNN’s Daniel Dale, Trump pushed at least 16 falsehoods in his what, 20-minute segment? Not as bad as a rally speech, but pretty bad for the country’s premier TV news magazine.

I don’t know how a man can think he sounds rational when he says he never said something, knowing full well he did, it’s on tape, and it’s a good bet the interviewer will show the footage during the interview. That’s a level of self-delusion I don’t think we’ll ever see again.

o yeah, the president lied, complained, rationalized, and basically acted like a child before storming out of the interview. I don’t doubt for a moment he planned to leave early all along. It’s a common practice of his. He did it in business, he did it to Pelosi and Schumer, but I bet he never did it to Putin.

Then came Pence, to alibi for his boss and tell more lies only more smoothly. As bad as Trump is, I think Pence is worse. I dread his being handed command of the country for even a couple days.

It was a relief when they finally switched over to talking to Biden and Harris. Joe seemed comfortable and at ease, even when pressed. He made sense, which is a disturbingly low bar for a presidential candidate to hit, but that’s where Trump has taken us.

nd just his sitting there and having a conversation tangibly refutes all the “senile dementia” crap the Trump camp is trying to whip up. I’m sure his followers think that was a product of deceptive editing by CBS.

It must be hard to run an incumbent’s presidential campaign with nothing of note to run on. His only distinct accomplishment was the massive tax cut for the rich. Even the crumbs the rest of us got were programmed to expire in seven years. And there’s just not enough filthy rich S.O.B. votes out there to win an election straight up. Hence the rapid-fire lying about things that may or may not have happened, that he may or may not have had something to do with creating.

I certainly hope the polling is correct and this disaster president gets washed away with the rest of the garbage. If I have to listen to another four years of his lying, 4th-grade vocabulary, and baby-talk patois, I may never recover.

Side Note: I recently watched the documentary on former Reagan and Obama White House photographer Pete Souse, called, "The Way I See It." I DVR'd a rebroadcast from MSNBC and if it's still airing, I highly recommend that you do too. His documentation of the Obama years shows why Trump is so fixated on him.

Obama was is everything Trump will never be. Literate, kind, smart, empathetic, playful, loving, respected, thoughtful, humble, and a seeker of multiple points of view.

Next to him, Trump is just a kid playing King of the Hill. And cheating at it.