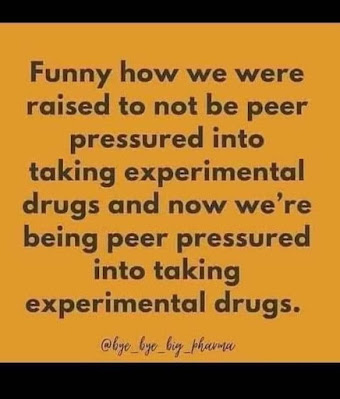 Experimental drugs? For cryin’ out loud, the COVID vaccines have been tested out the wazoo. There’s nothing “experimental” about them. Granted, they are still evaluating data from those having taken the shot, but that’s what science is supposed to do. It’s always gathering more data, always refining conclusions.

Being approved for emergency use does not make it “experimental,” it’s just a sign of how seriously the situation was and how badly we needed relief. And so far, the data says it’s working.

Any peer pressure exerted is just a valiant attempt to get thick-headed people to give a care about their health, their family’s health, and that of anyone else they encounter. I know it runs counter to Republican “best practices,” but there are some problems that “rugged individualism” won’t solve. This is one of them. Now get your head out of Breitbart’s ass and get your shot. It’s not peyote, it’s a chance to resume a normal life. 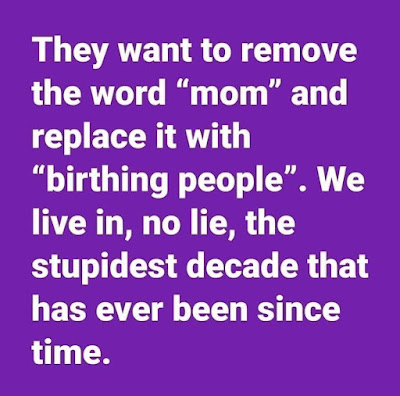 Who the hell is “They?” There is no Democratic movement to replace “Mom” or “Mother” with “birthing people. What happened was a couple of Democratic congresswomen used the term on their own in an attempt to be more inclusive. That hardly constitutes a movement.

But of course, Fox “News” and the rest of the Republican talking heads have to jump on it to try to whip it up into something to be outraged about. President Biden hasn’t worn a tan suit yet, so I guess this will have to do. 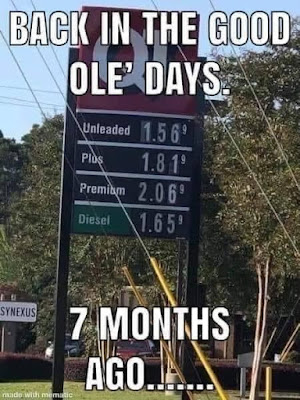 This could be seen as merely a nostalgic look back to another time when it was less costly to buy gas. But the person who posted this also posts a variety of other dubious conservative memes and no doubt sees this as a knock on Biden. I’m treating it as such.

But yes, back in the “good old days” of seven months ago, people were housebound; no one was traveling or eating out, or going anywhere but the grocery store or the doctor’s office in their cars. Demand was down the drain so consequently, prices came down too.

As the effects of the vaccine take hold, demand is increasing, which causes prices to return to where they were. Plus we had that pipeline hack which panicked everyone for a week, allowing the oil companies to jack up the prices to capitalize on the panic. (It’s funny watching Republicans complain about how Biden hasn’t provided the kind of infrastructure that would prevent such a hack, all the while obstructing the massive and much-needed infrastructure bill.)

President Biden doesn’t control gas prices, nor does Congress or any sitting president*. It’s just what happens in a free market driven by supply and demand, the benefits of which Republicans tout at every turn.

*Unless they sign some loopy executive order like The Federal Gas Prices Must Rise Policy. Or start bombing the Middle East. But short of that, they have no role.

It’s the kind of argument you can make up out of anything. By the same reasoning, Tom Brady winning the Super Bowl caused gas prices to rise. But as much as I’d like another reason to hate Tom Brady, the argument is complete bullshit.

If conservatives want to sharpen their meme game, they should look at these two: 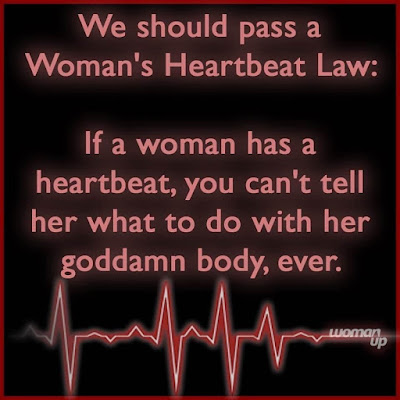 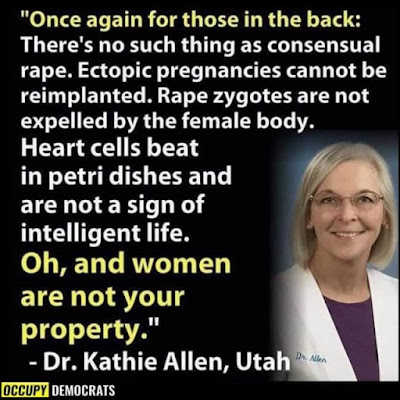 Logical, factual, and to the point.

It’s alarming the lengths the red states are going to now to crack down on reproductive rights, now that they see a favorable bench on the Supreme Court. Unfortunately, I don’t see any way that a major change isn’t coming down the pike. It’s inevitable, given the way the former guy let the religious whackos sculpt his nominees. We won’t be able to look to SCOTUS for help in keeping the misogynistic wingnuts at bay. The only recourse is to elect rational people to local government seats who will vote to undo these hideous laws. People overwhelmingly favor the keeping of Roe Vs. Wade and the spirit it represents. Local governments need to reflect that. When it doesn’t, it’s our own fault.

Democrats need to participate in every election and vote for people whose values reflect our own. Only coming out every four years isn’t much of a help.

Meanwhile, Republicans in state government are busy creating laws to prevent us from doing that very thing. (And SCOTUS isn’t going to be much help with that either.) Through gerrymandering and the severe curtailment of mail-in voting and drop-boxes, assuming control over local election boards, creating veto power for themselves over election results and certification, and distributing voting machines in a partisan manner, they are ensuring there will be no more upsets like in 2020.

They’ve shown their hands. They have no more ideas on how to win hearts and minds, so they are left with rigging the voting process. These ploys are so clear and obvious, they can’t even pretend it’s about “election security.”

They want the process hard and the lines long so that working-class people don’t have the time or inclination to vote. And you watch… right about the time someone sets up a service to stand in line for other people, like seniors, they’ll come up with another law to forbid that… they can call it the “No Cut-sies “ Rule.

Our only response is to be more stubborn and more committed than they are and make voting our Holy Grail, stopping at nothing to get it done, every election, every year. Double-check our registrations, get there early, stand in the goddamned lines they create, and vote angry!

The inmates are trying desperately to run the asylum and we can’t let that happen.

And now just to end on a lighter note, there’s this: 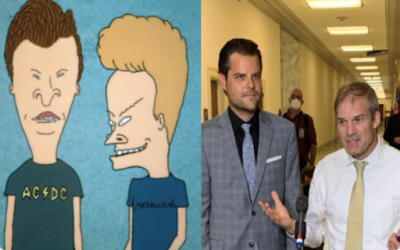 If either of these clowns (on the right) come to trial, I’m getting the popcorn.

I've tried hard to stay away from politics because I am weary but just having gone home and several family twits won't get vaccinated it was so frustrating. They do all kinds of drugs these little shits too. But a vaccine may hurt them. I think the drugs have killed too many brain cells and this is why they are stupid.

That's a distinct possibility. I also think a lot of it is just general rebellion. You Can't Tell Me What to Do Syndrome. Coming soon from the GOP: The You're Not the Boss of Me Act.

Ditto! I just found your Blog. Q: BTW, Why do Conservatives have such weird shaped Noggins' like "Matt Goats?"🤔😁 Hey, that's Matt's good bud "The Boy Wonder" Coach Jumpin' Jim Jordan! I think Matt is a dead ringer for the "Wooden Dummy"named Willy from that episode of the The Twilight Zone. Willie wanted to run the show! LOL. :D

Those two are walking, talking examples of the need for retroactive birth control.

When the Anti-Vaxxer Herd is culled by Natural Selection, I can't be too upset that Nature solved some problems for us.

I have zero sympathy for people getting sick or dying if they've chosen not to get vaccinated. It seems to be the only way to smarten up the gene pool.