Conservatives are trying everything to convince people that raising the minimum wage to $15 will summon the End of Days. Like here, for example: 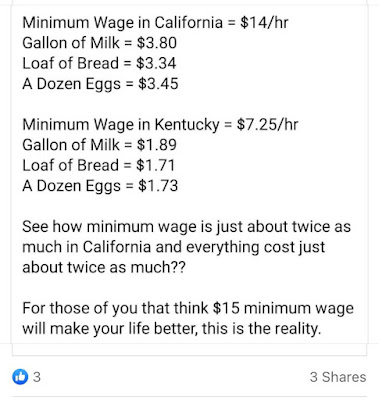 This is kind of a chicken and egg thing… Did minimum wage make prices higher, or did high prices necessitate a rise in the minimum wage? I’m betting on the latter because for as long as I’ve been aware of California, I’ve heard that it was an expensive place to live. California should be the example of why there should be a higher minimum wage. Prices are so high a $7.50 wage just can cut it.

And that brings me to another problem with this meme… it’s not like California has one universal pricing system. There are vast differences in prices between places like Los Angeles, San Francisco, and San Jose, as opposed to Sacramento or Bakersfield. I presume it’s the same way in Kentucky, although you probably get a discount if you offer up an hour with your cousin, Fuzzy Mae.

OK, I can’t really poke fun at Kentucky. Here in Maryland, the most frequent discount is the five-fingered kind, which is often holding a gun. So who am I to cast aspersions? But I digress…

So I get that Republicans have to fight against any kind of living wage… it cuts into profits like all payroll does. But if they hadn’t fought so hard for so long that the current minimum wage hasn’t moved in over a decade, maybe it wouldn’t be such a big jolt now. Prices keep going up but wages, especially at the bottom, have not. It’s time to catch that up. But not without tales of woe coming from big business.

I say if they’re really so worried about having to raise prices to counteract higher wages, maybe some of those CEOs can pare back on their annual bonuses and stock options. (Not like that will ever happen.)

But wherever it comes from, most of the money paid out in wages will turn around and get spent, raising everyone’s boat.

Looking at other countries, whose minimum wages are far higher than ours, their prices are not that much higher, if at all. All the hype about soaring prices is just a scare tactic on the part of the rich, which they’ve sung every single time the minimum wage was raised in the past. And somehow, the businesses managed to keep on going and we kept on buying stuff. There was no economic crisis. It was then and is now, a ploy to keep things the same, with the owner class comfortable and the lower class scrambling to get by.

Personally, I’m willing to pay a little bit more for my meal or whatever if I know the owner is paying his workers a living wage. It’s just part of living in a thriving economy. 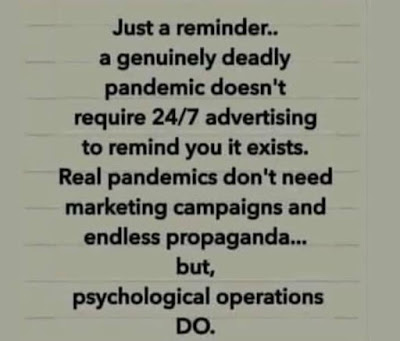 Ahem… There would be no need for marketing campaigns if there wasn’t a significant portion of the populations laboring under the delusions that the vaccines are dangerous, COVID is a hoax, COVID is no worse than the flu, the seriousness is exaggerated, and the death numbers are artificially inflated. And that doesn’t even count the real wackadoo stuff like microchips being injected into us for malevolent tracking purposes or some jibber-jabber about 5G. If we’re ever going to obtain herd immunity, we’re going to have to reach some of these folks, hence the heavy messaging.

So here we are, hindered from getting back to normal because idiots won’t take the precautions that will get us back to normal, because they want it to be normal right now!

I don’t know what these people think the payoff would be if their delusions were to be true. Where does the profit come in from convincing people to get vaccinated? I think, like the fabled South Park underpants gnomes, they’re missing a key step.

Who benefits from a massive downturn in the economy? DoorDash and UberEats? Maybe they’re the brains behind the whole anti-vax operation? Maybe that’s their business model… Ravage the population with a virus, so they have to stay home and order delivery. Once they’re spoiled by food being brought to the door, they’ll forget that they had to overpay for it by $10. That’s just good old American entrepreneurship.

I also saw another meme that interested me, but I didn’t capture it because basically, I’ve addressed it before. It was one of those things where they have a list of all the stuff for which they say you need an ID and no one complains about it, and then there’s the Voter ID.

It’s funny how they’re so desperate to not be seen as racist while doing such blatantly racist things. The last time, I attacked this argument by disputing the things they said required IDs. But here’s a different reason why this is such an invalid point: They’re only addressing the small scale. It’s as if they’re describing a house as an object that’s 4” x 2” x 8”* because they’re only looking at one brick.

You have to pull out and see all the bricks to see what’s been built. So then when you factor in:

·        Reducing the number of voting machine present in urban areas.

·        Using all these things to create long lines and then forbidding people to bring food or water to those in line.

The only and obvious conclusion that these bricks make a wall and it’s placed directly between a certain segment of the population and the voting booth. They want to make it as difficult as possible, with the hopes that people won’t put themselves through it. It’s sad that this is the only way they see themselves winning again. No new ideas, just election manipulation. So don’t cry to me that it’s “just an ID.” It’s not. It’s just another brick in the wall.

*Dimensions are rounded up because I didn’t want to get into all the fractions. So please don’t rely on these numbers to calculate your bricking needs.