The Road to Ruin

I’ve never felt such dread before when the party I support is “in power.” I should feel much more content but all I see on the horizon is disaster. It’s not because of shortcomings I see in leadership, it’s that our guys seem to be getting outflanked. That’s what happens when you’re suddenly playing a game with no rules.

The biggest source of anxiety is regarding the 2022 elections, which are being slowly and steadily stacked for Republicans to retake the House and Senate. Red state governments (GA, TX, FL, etc) are busy passing draconian voter suppression laws, no doubt to be rubber-stamped by the current SCOTUS, to ensure their reclaiming of power. Minority-rule power at that. (By which I do not mean rule by “minorities” as the term has traditionally meant, but fewer people on one side of an issue as opposed to the other.)

The only brake on this runaway train seemed to be the prospect of passing the For the People Act, (HR1) which would federally codify voter rights and make it easier to vote rather than harder. In short, it would cut off the red states’ attempts to suppress opposition vote under the guise of “election security,” whose only aim is to “secure” the “election” for themselves.

Over the weekend, Sen Joe Manchin (D?WV) publicly came out against the bill, because he thought a partisan bill would send the country into chaos and end democracy as we know it. This makes no sense to me considering how the red state voter suppression bills are doing that right now. How much will the country be torn apart when state legislatures start overturning elections based on unproven accusations and allegations?

This makes the issue of killing the filibuster moot. If we can’t get the 50 Democrats we have on the books to support free elections, there’s no point in trying to end the filibuster. That’s another issue that neither Manchin nor Kyrsten Sinema support. And now it looks like it’s something we’ll need in two years, if the GOP doesn’t kill it themselves first.

So the only brakes we have on this runaway train seem to have the tensile strength of jello. The only strategy left is for the Democrats to call all this out in public, rally the citizenry, and prepare everyone to dig in to exercise their vote no matter the obstacles. Excuse me if I’m not optimistic about this option. Politics is a huge part of life to me, (you too if you’re reading this) but for huge swaths of people, it’s just not a priority. Certainly not something over which they want to lose a half day’s hourly wage. And that’s exactly what the GOP is counting on in rolling out their fascist “election” rules.

This weekend also saw a new rally from the former guy, who among other things:

·        Rejected the notion that several Democratic-leaning states didn't side with his agenda.

·        Alleged that elections in some blue states could be "corrupt."

It depresses me that we live in a world where the ravings of this madman still matter to some people. The guy couldn’t be any more full of shit if he replaced his Big Macs with turdburgers. How narcissistic can someone be to disbelieve that there could be people who don’t agree with him? This is what happens when you’re surrounded by yes-men who want nothing more than to keep their parasitic relationship going. 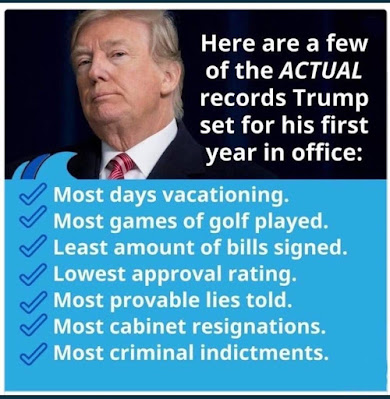 In his mind, the mere fact that his opponent got more votes, by default, means they cheated. And what’s worse, he’s convinced his idiot followers, people he wouldn’t let wash his car, of the same thing.

Until this country learns how to deal with objective reality rather than run with intricate conspiracy theories, we’re all looking at a one-man, one-party autocracy in the near future.

And speaking of conspiracy theories, the worst thing might have happened… one of them might have been close to the truth. 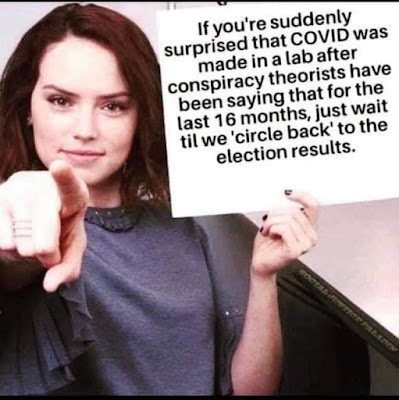 I haven’t been following this story very closely so I’m not sure of the details, but apparently there was something from Dr. Fauci’s released emails that make people think the coronavirus was actually created in a lab rather than springing from wet market animal transmission.

Now, the reason I haven’t been following this story is that it doesn’t make a lick of difference. Whether this was a deliberate Chinese plot, (which also killed thousands of their own people), or an accidental release, it doesn’t change the fact that the former guy ignored and downplayed the seriousness of the virus when he knew for a fact how dangerous and contagious it was.

How would the origin of the virus change what could have been done about it? What if China had come out and said, “Here, take that! Die Yankee pigs!” Would the former guy have addressed the problem any differently? Would that admission have removed the need for spacing, masking, and vaccines?

Of course not. We’d be in the exact same place we are now. The former president kicked the problem to the states, told them to deal with it on their own, and then fought them for supplies. He created a political litmus test out of a common-sense health issue and Americans have been dying over of it ever since.

So now, the wingnut brigade thinks they’re onto something since one of their fevered wet-dreams might have paid off. I attribute it to the famed Blind Squirrel observation, in which one occasionally finds a nut.

But now they’re using it as “proof” that the election was stolen and the former guy is actually the current guy. Unfortunately for them, you can’t create buttercream frosting out of manure. It’s plausible that the Chinese were working on a virus, which then escaped containment, either on purpose or not. It’s within the realm of reality.

However, the idea that somehow thousands of illegally cast votes appeared in precincts across the country without leaving a molecule of evidence, thousands more GOP-cast ballots disappeared, never to be found again, but the down-ballot elections were totally unaffected, all the while both Republican and Democratic election officials swear by the counts … that’s what they’re counting on being publicly revealed?

These people really do have their heads in a bubble. And by bubble, I mean that empty space formed amid one’s lower torso.

It’s past the point of no return..thanks to Fox News, religion, poor education and just plain stupidity and apathy.
All countries fall and ultimately it is from within. I’m glad I’m old.

I agree with Mary... there is so much low information being believed, no fact checking even though the truth is not that difficult to find, and the poorly educated being easily manipulated by the ultimate Con Job. Of coarse Political Parasites, Grifters, the vulgarly Rich and World Leaders that want to see us utterly fail all Love the Orange Menace too. The more ludicrous the claims, the more deluded his Base becomes... the depth of stupidity knows no bounds apparently.

Now they're stooping to criticizing fact checkers. It's like, "But I don't WAAANT to be called on my bullshit..."

There's always been a need for fact checking in the political arena but the last four years have made it crucial. The Right's disregard for hard cold facts is making a laughing stock out of their party.