Take the Money and Run

With the tragic family events of this month still lingering, I’ve been feeling quite like an exposed nerve, and never so much as when I see people trying to be clever about masks and vaccinations on Facebook. The stupidity is pervasive and insulting. All week I’ve been socking away memes for dissection, for your edification and entertainment. 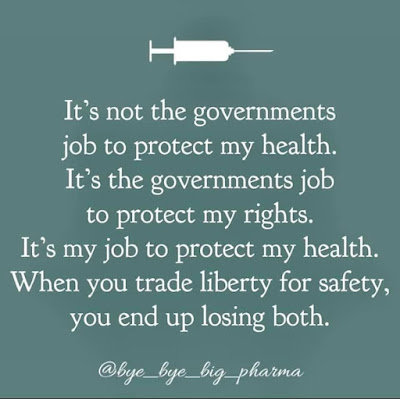 On the contrary, it is exactly the government’s job to protect the health of its citizens. What do you think the whole notion of national defense is? Defense from outside forces who would do you harm. Not to mention the US government has been in the “health” business since the advent of modern medicine. Vaccination mandates by state and federal governments are why we don’t have smallpox and polio right now. And the only reason measles is still on the board is because of the numbskulls who ducked getting the shot.

So the very premise of this argument is flawed from the outset, long before they tacked on a misinterpreted quote from Ben Franklin that’s been trotted out regularly by so many Freedumb lovers. Franklin was actually describing effective self-government in the service of security as the very liberty it would be contemptible to trade. 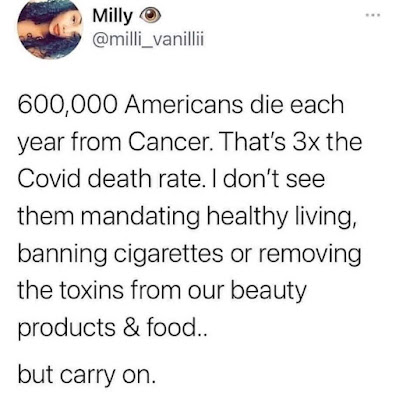 Say hello to Mr. False Equivalency! While they probably should ban cigarettes and remove toxins from any and all products, they get away with not doing so because cancer isn’t contagious! That changes the whole equation right there.

We are not a country in which one person’s “liberty” is allowed to cause real physical harm to another. There are laws against that. (At least in theory. In Texas, not so much.) So as the two scenarios being compared are nowhere near equitable, this is a completely invalid comparison. 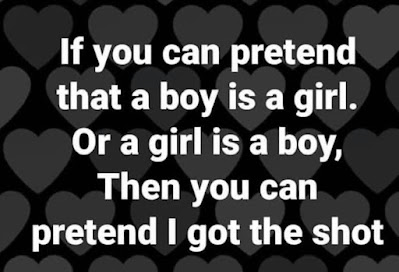 As it is, this writer is pretending there’s no such thing as a transsexual. Transsexuals have been around for as long as mankind. It’s a real thing in some people’s psychological makeup and not just “pretending.” (Aside from the stray pervs who dress as women just to get a look in in the women’s locker room.)

And again, they’re comparing a personal, psychological issue that only affects the person having it, as opposed to a fatal, highly contagious virus. In other words, just word games mean to “own the libs.” People are dying alone because of ignorance like this being pushed. If they want to own the libs, own that. 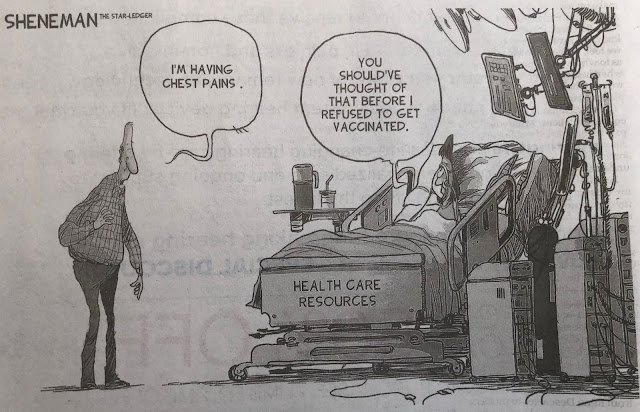 From this morning’s paper. The timing was impeccable. 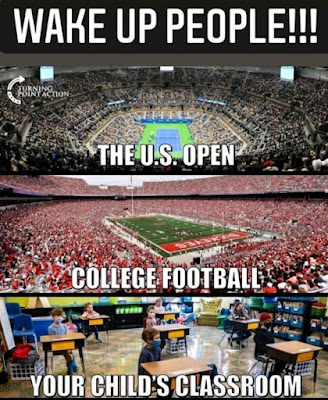 This is another faulty comparison because the effects of a group gathering outside one time for a few hours versus a group gathering indoors for 6 hours a day, five days a week, are quite different. If one person brings the ‘Rona into a classroom, the whole shebang will need to be quarantined and many could get seriously ill. Plus, they’re freaking kids, who are required to be there. Every adult at the US Open or a college football game knows the risks and chooses to be there. They can also wear masks as well, although I can see by the crowd shots that few do.
Also consider that masking and proximity rules are made by state and local governments, most of which are using business considerations to establish guidelines, not medical ones, or else everything would still be shut down. The Powers That Be want the money flowing again and that takes precedence over public safety.

So yes, by all means, wake the hell up. Wear your mask and social distance. There are no bravery points for flouting the rules and getting sick. It’s getting old. 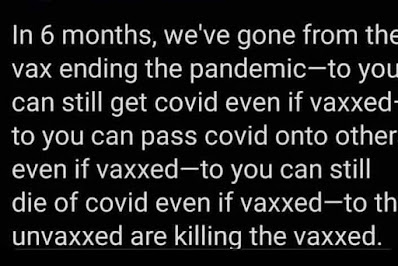 Why not just call this one, “I Don’t Know How Science Works.” I don’t even have to parse this one. The following graphic is all that’s necessary. 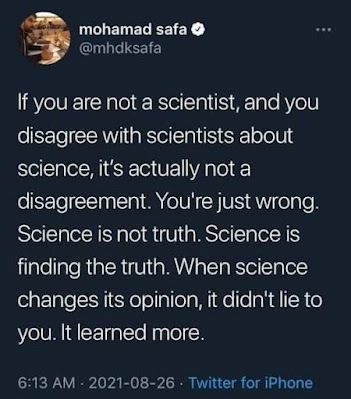 Science, by definition, changes as it goes, always seeking more data and refining its conclusions. It’s not bound by modern conservative politics, where grabbing onto an opinion and holding on for dear life despite evidence to the contrary, is revered.

I spent last week down in Florida with my mom, helping prepare for her to come back to Maryland and stay with her sons. There were doctors to see, neighbors to ask for help, arrangements to make, boxes to ship, and bags to pack.

But on the bright side, we had to do our best to get rid of all the perishable food on hand, the meat, fish, fruit, bread, and sandwich fixin’s. It was a job for which I was eminently qualified. It’s my “particular set of skills,” if you will.

One of the things I learned I’d have to transport back up north was my parents’ hurricane “getaway” bag, which not only contained all their important documents, (insurance, pension, investment, tax info, marriage licenses, deeds, etc.) but also around $22,000 in cold hard cash. I almost choked.

Now, I’ve always agreed that having emergency cash on hand is a good idea, especially in a hurricane zone, but I think my dad might have gone a bit overboard. But he was concerned about banks losing power or getting hacked, preventing him from accessing his savings in an emergency. And if his car broke down on the road, he’d be able to buy another one with cash in hand.

I did some research and found that there is no top-end limit to the amount of cash you can bring on a domestic flight, although they recommended you give the TSA a heads-up before the bag goes in the scanner. (No way were we going to trust putting that kind of dough in a checked bag.)

I wondered what kind of hassles might ensue with the cash, even if it’s legal. I know they’re always on the lookout for drug mules and money launderers, so I prepared the story I’d tell:

“My father passed away last week and I’m taking my mom home with me. This was their emergency hurricane fund. Here’s my dad’s obit from the paper. Here are our driver’s licenses. Here’s HIS driver’s license. His picture matches the one in the obit. See? We’re all family. Hey, put that Taser down. What are you doing with that duct tape?”

Basically, I wanted to show I had a legit story and could prove it.

When I informed the young guy facilitating getting the bags put through the screener, that I was carrying a considerable amount of money, he didn’t really seem to care. He was like, “Uh yeah, take your shoes out of the tray and put them on the belt.”

Now the scanning agents? They noticed. I found that once I got through the body scanner, they were giving my bag a real good looking over on the screen. Then when they sent it down, an attendant took it and said, “Come down here so we can have a look.”

She went right to the cash pouches, unzipped one, and then said, “Can I get a Lead down here?”

A manager dude came down and they both started poking through the wrapped bundles. I chimed in that it was my parents’ hurricane money but they weren’t listening at all. Then they stopped the poking, zipped up the bag, and gave it back to me without fanfare, further ado, or a tasing. I don’t know what they were looking for, maybe dye packs. Maybe they thought we were a couple of geriatric bank robbers. Anyway, we got on the plane and home without further incident.

And no, the money is no longer on the premises. We moved it on, right away, to a place whose security system can't be defeated with a biscuit.

In the last posts, I promised to tell some Dad stories. I figured I’d start by letting him tell one himself. The audio comes from 1992 when I decided to record a conversation with my parents, to keep for posterity. You can find the whole story about that here.

This is a story about a train trip Dad took with his best friend, Frank, AKA, “The Lob.”

Director’s DVD Commentary:  “The Lob” is an old-time term for one’s junk.  I have no idea how the guy came by the nickname, (I suspect it was self-appointed), but I’m sure there are quite a number of people that know him by that name only.

The Lob was afraid to fly so when he and Dad traveled together, they took an Amtrak train The Lob always called “The Rattler.” This is what happened on one such overnight trip. Running time is 4:41.

OMG that huge Emergency Cash Stash Story had me LMAOROTF, now you probably know how a Mule feels trying to get thru Security? *LOL* I've never had to carry a stash that large but when I was a Bank Exec I once had to take a Check for over a Million to another location in the Bank and for some reason I felt like I was at risk to be robbed if anyone knew the amount of that Check... so it made me nervous to be responsible for it. Nobody much Cared, but then again, they had no idea what/how valuable that piece of Paper was either... yours was in bundles my Friend, over Twenty Grand, and you're still Alive to tell the Tale... Applause and a Standing Ovation!

When I was in retail, we called for a police escort to bring our deposits to the bank, with cash totaling far less than $22k.

The getaway "bag" was actually a hard-sided attache case, right out of the 1970s. It looked like something that should be handcuffed to my wrist. It looked way too conspicuous so I moved the contents into my laptop bag, which I carry all the time. Helped me feel like a normal traveler rather than a cash mule.

Oh, Tony, couldn’t agree more with this post. As you know I live in the red state of Ohio, where ignorance is abundant. I listened in awe to Dad’ recording even though I’ve heard that story many times. It was fascinating to hear his voice and I will play it when I need him. Thank you so much for sharing that. You rock, Bro.
Your loving sister, Ann Noel (Old Mrs. Nibbs, Nibbles, Nibblesworth, and Niblet to you) 💔

I'm always happy to provide ammunition to others encountering flawed arguments. The more we defend the truth and repel bad-faith assertions, the better.