A Lot of Hot Air About Gas

With Russian social media trolls occupied elsewhere, I wonder if meme creation on behalf of the fossil fuel industry is being outsourced back to the US, because they seem to be even dumber than usual of late. For example: 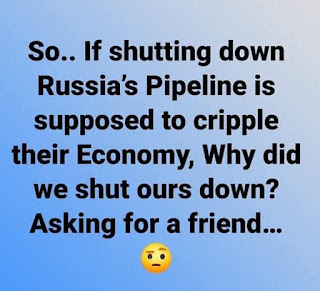 The only thing the Russian oil pipeline and the Keystone XR pipeline have in common are the use of pipes. It’s funny that to conservatives, if only we hadn’t killed work on the Keystone XL pipeline, we’d all be bathing in oil right now. Gas would be 15-cents a gallon and plastic would be free.

But in reality, the “Russian Oil Pipeline” refers to the EU and other allies refusing to buy Russian oil, due their invasion of Ukraine. That’s a huge hit to the Russian economy, because while they may be flush with oil, they can’t eat it. It’s a massive exertion of pressure on Putin and his oil oligarchies.

The Keystone XL pipeline was intended to bring Canadian shale oil from there to our gulf ports, for refining and export. There’s already a separate branch of the pipeline that comes in for our own use.

Furthermore, this Canadian oil is low quality and not meant to be turned into gasoline. So the whole issue of our energy independence suffering for lack of this pipeline is ludicrous. It makes zero difference to the price of gas or our oil reserves. But you wouldn’t know that by listening to Republicans bitch about it. Their ignorance on the subject is either willful, or simply the regular kind. Maybe if they had some Democratic friends, they might learn something and wouldn’t need to ask such stupid questions.

The fossil fuel industry is scared shitless over the progress being made with electric cars. You can tell by the lengths they’re going to, to stifle growth and badmouth the technology. Like here: 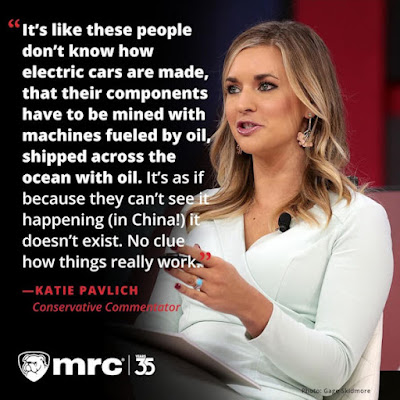 This is using a basic “strawman fallacy” argument, by taking an opposing position, stretching it far past the limits of reality, and then attacking it as if that’s the actual position. I don’t think anyone is seriously pushing electric cars as a method to eliminate 100% of oil usage. I mean, that will have to happen, but it’s going to take decades, especially with the unified pushback from the oil companies, who won’t let their cash cow be sacrificed until they’ve wrung out every last dollar.

The basic rebuttal to this position is that traditional cars also have to have their components mined or shipped via oil/gas-driven machines. So that part is a wash. But then the electric cars go on to use far less (or no) oil than the traditional cars, thus eliminating x-amount of cars’ worth of emissions.

The real problem here is this position that unless any given solution is 100% oil-less, emission-less, and foolproof, it’s a waste of time and money. It’s not. Every little bit helps and when enough little bits start piling up, it will make a much larger difference.

Climate change is a real thing and is happening regardless of fancy rhetoric and supposed “gotcha” memes. There will be big changes afoot. We can either take it seriously as a country, or be destroyed by our inaction. It may not be my generation, but the ones to come will have to pay the price for oil industry’s insistence on profit over survival.

It wouldn’t surprise me at all that one of the reasons the price of gas is so high is to throw shade on the current administration. They know the Republicans will do their bidding in doing things like continuing subsidies, stalling on electric car infrastructure, lowering minimum MPG requirements, etc. So if they can rake in the cash hand over fist and blame it all on the Democrats, it’s kind of a no-brainer for them. And I think that’s the real reason why we keep seeing easily disprovable memes like these.

I don’t know why but there’s a part of me that still cares about the Rock & Roll Hall of Fame. I guess it’s just the old record store clerk in me, but I want to see credit where credit is due. And I want to see credit go to the purveyors of actual rock & roll. For example, take this year’s list of those being considered: 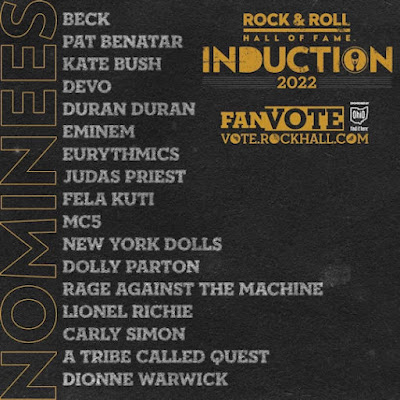 To me, the name that jumps out is Pat Benatar. It’s a crime that she hasn’t been inducted already. As far as I’m concerned, she should have went in in 2004, 25 years after her debut album. (Artists first become eligible 25 years after their debut album.) But there were a lot of female artists who have had to wait an overlong period of time before being duly recognized. Joan Jett and Heart come to mind.

Back when I was in college, my girlfriend and I used to hang out with a lot of her friend, many of whom were softball players. Pat was practically their patron saint. They all worshiped at the altar of Pat Benatar. I find it unbelievable that Madonna is in the Hall and Pat is not.

Looking over this list, she ought to be a shoo-in. Hell, aside from her, only 11 of the remaining 16 should even be considered “rock & roll.”  And that’s where I have a problem with what the R&RHOF has become. Call me a dinosaur but I think the Rock and Roll Hall of Fame should be for Rock and Roll artists. I know they’re trying to be a big tent, but at this point, the tent is so big it’s not even a tent anymore, it’s the ozone layer. It’s a hard distinction to make, I fully agree. I mean, the early founders like Chuck Berry and Little Richard, and other blues artists paved the way for the creation of rock and roll, so they should go in.

But Lionel Richie, Carly Simon, and Dionne Warwick? Not rock & roll. If there were a Pop Music Hall of Fame, they go right in. Dolly Parton? She’s already in the Country Music Hall of Fame and should be in the prospective Pop Hall as well.

Note: Dolly Parton actually withdrew her name from consideration today because she didn’t consider herself worthy. It’s ironic that to me; in making that statement, she just made herself worthy.

To me, artists like Beck, Kate Bush, Devo, Duran Duran, and Eurythmics are “new wave” rather than Rock & Roll, but I understand the argument for inclusion. It’s another hard line to draw. Personally, I think Weird Al Yankovic is more deserving than any of those acts.

Eminem? Forget it. He should be in the R&RHOF right after they put AC/DC in a Rap Hall of Fame.

Once the Hall is filled up with actual rock and rollers, THEN loosen the parameters and look at some other sub-genres.

I know, it’s all a pointless argument, but I imagine that’s what the Rock Hall wants… people to talk about them. I love talking music. Music inspires passions! And I probably get overly wrapped up in some stupid honorarium, especially in wanting to see it reflect my own musical tastes.

I always try to catch the induction broadcast, usually by DVRing it. That way I can speed by the artists I don’t care for, although sometimes they surprise me. But however it goes this year, I’ll still be playing my music in the car as loud as I can stand it. When I’m at a red light, I always want anyone walking by to look over and think, “Man, that old fucker is rockin’ it.”

Although in reality, they’re probably thinking, “I wish that asshole would turn that shit down”