This Week in Outrage

The “Outrage” stories were coming fast and furious last week; there was barely time to digest one before another splashed down to steal the attention.

Is anyone else questioning the timing of Justice Thomas’s little disappearing act? Some bad news broke while he was in the hospital. Maybe he got a “heads-up” that his wife’s texts with former Chief of Staff, Mark Meadows, were about to become public. And boy, was that ever a kick to the hornet’s nest? It’s not a good look for a Justice and wife, who by their own public admissions are best friends and confidantes, to have the activist half of the duo texting a high-ranking White House official on how best to steal an election. Not to mention it being one whose fallout has been and will continue to be heard in court by the other half. And him being the lone vote to prevent the January 6th committee from obtaining White House records? That’s not even “fishy” or “suspicious,” it’s plain wrong. In retrospect, it reads like an admission of guilt.

It would be nice to think that Thomas will recuse himself from further cases of the like, but we know that’s not going to happen. Republicans don’t care about what looks bad or what may be a conflict of interest. They are interested in the preservation of power, so sod the naysayers. It’s not like Congress is going to impeach him over it. It would be warranted, but it will never happen, not with any lasting effect. The House may pass an article of impeachment but it will be DOA in the Senate.

I don’t know about you but I’m pretty fed up with all these wild hearings full of big speeches and grandstanding, excuses and alibis, but in the end, producing zero change to the situation.

To me, it makes perfect sense that in the absence of legal sentencing specifics, there are layers to an issue like child pornography. There’s obviously a difference between creating this content and merely downloading it. Yes, the end consumer creates the market, but the producer is the one directly hurting the children. The two ends are not the same. Both are bad, both should be punished, but not necessarily equally. KBJ, the ABA, and other respected judges agree.

To me, it’s like a difference in statutory rape cases. On one hand, you have a grown-ass man having sex with a minor. On the other, you have an 18-year old with his 17-year old girlfriend, who could have been dating for years. Are these two situations really the same? Would they necessitate the same punishment? And hey, if it’s a Congressman from Florida, even the former isn’t even a crime, is it? I haven’t seen any charges filed yet.

Anyway, it was clear that the Republicans on the committee weren’t trying to make a reputable case; they already knew the votes were there to confirm. And they knew that the 6-3 advantage they currently enjoy on the bench would remain as is. And that’s probably why McConnell seems to be allowing Manchin and Sinema to vote with their alleged party to approve.

In turning the hearing into a sideshow, they were merely trying to get their 10 second sound bytes onto Fox “News” so their constituents back home would see that they’re tough on the perverts. They know their base doesn’t care enough to dig for facts, they will lap it up and believe it because they’ll want to. It will only confirm what Fox “News,” QAnon, and Breitbart have been telling them for years. And certainly, they can’t be seen voting for a Democrat-nominated candidate for SCOTUS, not without getting primaried from the Right this summer. Their base doesn’t care about tradition or nuance, they want their guys owning the Libs 24/7.

But they needed some kind of fig leaf to use when they cast their inevitable “No” vote. The Senate’s job is literally to examine a prospective justice’s qualifications for the job, not to evaluate the outcome of potential rulings they may not like. 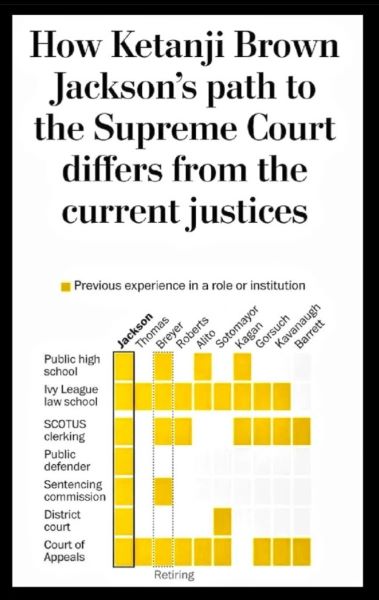 But what do we keep hearing? “She’s highly qualified but I’m still voting no.” Believe me, the “no” votes were in the chamber from the start. Their participation in the hearings was only to publicize a reason.

You know, I always liked that Joe Biden spoke his mind. Yes, it led to what some consider to be “gaffes,” but you know where he stood. So when at the end of this weekend’s speech, he said “For God’s sake, this man cannot remain in power,” I was all for it. I mean, it’s obvious, isn’t it? The pictures and video we’ve seen on TV are bad enough; remember that he’s no doubt seen much worse, from classified briefings. He was basically reacting to all the shit he's seen and calling a spade a spade.

I understand why his office has been trying to walk it back because they can’t allow the perception that the US is aiming for regime change. But we are, because that seems to be the only way this war will ever end. And Putin knows we are, and he’s been telling their citizens that for years. So what’s the difference?

Granted, this is one more thing the Republicans are going ape-shit over because it can be filtered through their pre-ordained plot to cast Biden as a batty old man, but really, what else would they do? If Biden had said, “Hell no, we’re not trying to knock Putin out of power,” they’d go ape-shit about that too. They have no qualms about arguing either side of an argument with Democrats.

People always complain about politicians being full of shit, or never saying anything of substance, or giving canned responses. It’s a shame that when one of them breaks the mold and says something heartfelt and honest, he gets shit for that too.

This brings us to the main story of the weekend, the thing that has pre-empted every other conversation, where last night at the Oscars, Will Smith walked up on stage and smacked Chris Rock upside the head for making a joke about his wife. No question that it made riveting TV. (From what I understand… I wasn’t watching. Hell, Walking Dead was on!)

Is this really what it’s come to? We’re just allowed to go smack people who say things that displease us? If so, for Pete’s sake, let’s get this ethos onto the Senate floor! There would be a line starting outside the building leading straight to Ted Cruz.

Will Smith should know better. I mean, he’s known for delivering devastating put-downs during interviews, going after wives, mothers, and whatever strikes a nerve. It’s awfully thin-skinned of him to lash out when someone does him the same way. Not to mention that he went after a dude half his size. I wonder what his reaction would have been if it was THE Rock rather than Chris Rock who told that joke. I bet his ass would have stayed in his seat.

I carry my own water, thank you very much. But we draw it from the same well.

Feigned Outrage abounds these days, it's so predictable and so fake. Perhaps WS needed us to be talking about he and Jada, which now everyone is, even bad Publicity is still relevant in the Entertainment Industry, notoriety and bad behavior even moreso actually, voyeurs of Celebs LIVE for stuff like that! I didn't see it but heard it was a bit 'delayed' so it just reminded me of Janet Jacksons Breast from an alleged Wardrobe Malfunction that just seemed all too convenient and was talked about so much... otherwise nobody would have remembered a damned thing about Janet's performance or Will Smith's Oscan Win... now it's the Slap heard around the World. I couldn't even watch the Confirmation Hearing since any Woman having to put up with Abuse and have to retain her Dignity and Composure thru it, especially someone of any marginalized group, makes me wonder why it wasn't stopped and nipped in the bud... abuse is never okay, EVER... and she should never have been exposed to it while the World watched her being bullied and contempt shown towards her in a most sickening way. Behavior tolerated is Behavior accepted... we shouldn't be accepting any of it and there should be serious consequences for the perps whenever they cross that line/boundary.

I neglected to mention that one of the reasons the GOP made such a spectacle was for revenge over the Kavanaugh hearings. The difference is that there were serious issues involving Kavanaugh (which remain unexplained) and the made up issues regarding KBJ.

Well, as the pop culture guru that I am(lol), you already know I saw it all LIVE! I know that Will has been humiliated when it came out publicly that his wife had cheated on him, along with other things that were being said of him, and then to have his wife embarrassed yet again by Chris Rock, really set him over the edge, and he lost it. a lot of people don't know that Rock doesn't like Jada because of something that happened years ago, so he often goes after her every chance that he gets. But you know how I feel about violence, and that is never the answer. The irony is that Chris Rock used to be bullied as a kid, AND he cheated on his wife, but he's a talented performer. I like Will because he's mostly taken the high road, but friends have now turned against him, some of his movies deals are on hold, his marriage is more stressed than ever before with he and Jada barely speaking, and society will never look at him the same way again. it seems like people don't even remember that he won an Oscar for a brilliant film. I'm pretty sure he's learned the valuable lesson of sitting on his hands, instead of using them to hurt others. Hugs, RO