I am now an official Wii dude now. Just installed the bad boy... (so simple, even fossil can set it up). Opened the box at 7:30 and was playing by 8:00. The girlfriend retired to her apartment tonight to give me some space and to watch American Idol in peace, I suppose.

First up was bowling, because that is what I'm most familiar with playing. I took my own advice and set up a "Mii" for regular me, and a Mii for playing left-handed. (I called him "Lefty"... I save my scant creativity for this forum.) I designed Lefty as the anti-me, making him blond and angular. Regular me is more bowling pin-shaped, but I'm working on that. 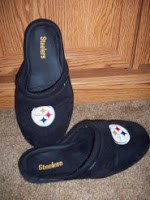 Right off the bat, I saw that I needed to address my footwear. My regular slippers and my slipper-socks all have good traction on the carpet. Chipping off a little bit of that creativity, I came up with my new Wii Bowling Slippers. Nice slide for my landing foot. 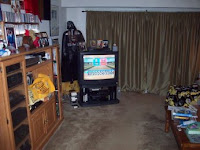 I pushed my coffee table up against the couch and angled the TV straight back through the room, to set up a nice little "alley" effect. Nice 'n roomy.


So, surprisingly, I gave myself a good match. I was actually better my first time left handed than I was my first time right handed back over Christmas. Final score, Me 166, Lefty 140. I had some good strike action going, but Lefty was surprisingly good at picking up spares. Go figure... 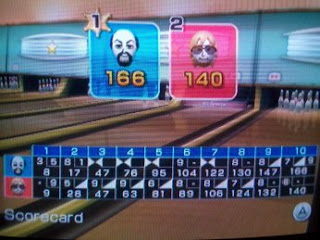 From there I tried out tennis. That took a bit to get the hang of... I eventually realized that your player doesn't really need to be near the ball to hit it.

Out of curiosity, I tried a menu that said "Training". I thought it was a fitness thing but was happily surprised to see that it was a series of skill tests involving the games from the Sports disk. I suppose I wouldn't have been quite so surprised if I'd have actually read the directions, but I was happy nevertheless. So I did some tennis drills before checking into the boxing.

Out of all the games, the boxing provides the best workout. But there's also some ego involved. No one wants to get knocked on even their cartoon ass. So I did some drills... hit a heavy bag (done acceptably well)... practiced dodging balls thrown at me (mostly unsuccessfully- it was almost like I was trying to catch them with my skull)... and trying to punch the trainer's gloves (sorry... I mostly hit the trainer. Sorry Mick...).

Now it's time to box against the computer, and there's little bald-headed mii out there mixing it up with a guy that looks like Ronnie Van Zant. So I'm going like wildfire, bobbing and weaving and throwing punches from all angles. I'm noticing that messages keep coming up, like "Guard your body" or "Guard your face." I'm thinking, "wow... tips during the fight." Then the Wii says... "OK, Fight!"

I'm doing all that work during the tutorial. The fight's about to start and I'm already in the bag. Live and learn. I had to rely on my guile and treachery to drop old Ronnie in the 2nd round. Dropped the next guy in the 2nd as well, but he biffed me around pretty good for a while. As in real life, it's a hell of a lot easier to beat up on someone that's not hitting you back.

After day one of Wii-hood, I feel pretty good. This is going to be a lot of fun, for at a couple days. Then I'm going to need a week off to recover.

If Nintendo is looking for a new attachment for their Wii Sports, I suggest releasing "Wii Oxygen."
Posted by bluzdude at 10:16 PM