I've never really had one of those “Email Moments” you see on TV, where someone sends a horribly inappropriate an email by mistake and then goes into a blind panic trying to fix it.  Worst thing I ever do is send things out without the intended attachments and then have to resend it.  I’ve had a pretty good run, I must say… right up until Tuesday night, when I did something so awkward and inappropriate that was worthy of The Office’s Michael Scott.
As you may have seen, I’ve been reposting some goofy stuff from the website Failblog.org.  There, they post pictures, videos and other clips of bungled signage, clunky translations, inadvertent porn, YouTube face-plants… any and all ways that one can “Fail.”
The other day, I found 3 items that I thought were keepers.  The first was featured in my last post… an unfortunate vanity license plate that read JZZLUVR.  The assumption, for those with pure and innocent minds, is that the owner was thinking of JaZZLUVR.  The rest of us pervs naturally saw it as JiZZLUVR, which is a completely different thing.  But it got me thinking of the idea of vanity plates in general and I decided to base a post around it.
But I also found a couple of other interesting things, so I saved them to an email so I could file them away later.  One of the items was this picture: 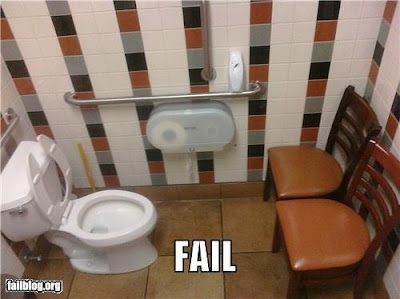 When I saw this, I knew I had to send it to my Blog Sister Cassie.  When we all first met at the Darwinfish Fry last August, the restaurant we were at had a women’s room with 2 toilets sitting side by side, with no divider between them.  Cassie and her sister Carly found that to be hilarious and snapped a picture, which they later put up on their site.  So when I saw this variation… a toilet with seats for an audience, I knew I had to send it on.
There was one other keeper, but I’ll get to that later.
So Tuesday night, before beginning to weave the comedic magic makes up one of my posts, I opened up all three pictures and saved them to their appropriate places in the vaunted Darwinfish Archives.  There was a bit of a hiccup with one, where I wasn’t sure how I got to this other folder, but I carried on.  Then, real quick, I sent the Bathroom Audience picture over to Cassie.  Then I turned my attention to whipping up my Vanity Plate post, with the hilarity sure to ensue.
While I was working on that, Cassie emailed me back.
Cassie: You’re so thoughtful, Bluz.  So thoughtful.  :) That’s AWESOME.
I was pleased that she saw the humor.  I like Cassie.  She gets me.
So I responded.
Bluz: It’s kind of like Restroom Musical Chairs.
I thought that would be the end of it.  But as I continued to work on my post, Cassie emailed again.
Cassie: Wait.  I’m confused.  What I’m seeing is a California license plate that says JZZLUVR.  Is that what you meant to send?
Uh oh.  That was NOT the picture I meant to send.  I wondered if I mislabeled the pictures, so as I was replying to her, I went back and checked.
Yup.  That little hiccup I had earlier?  For some reason, when I thought I was saving the Bathroom Audience picture, I was actually re-saving JZZLUVR and changing the title.  When I attached it to the email, it was from a folder where I only see the file names and not the thumbnails.
Slowly I realized what I had just done.  And you know, it wouldn’t have been so bad, except for what I’d originally put in the subject line.  Oh my God.
Now picture this: before she opened up this email, and saw the picture of JZZLUVR, she saw this subject line:
Subject: Saw this and thought of you…
Sitting all alone in my apartment, I clasped my hands over my face in horror.  Holy shit!  What have I done?  It was The Fail to End All Fails.  What must she have thought of me, some out-of-state guy nearly twice her age, whom she’s only met once?
Naturally, I fell all over myself trying to explain.  I mean; you can see the file name in the email attachment says “Bathroom Audience,” and that backs up my story.  But you know how when you try to explain something like that, the more you explain, the more it looks like you’re just making excuses?
If I were to follow through on getting my own vanity plate now, I’d have no choice but to see if this one is available:

The other funny thing?  How cool was Cassie’s response, before she knew my intentions?  She totally went with it, figuring that I didn’t mean any harm.  As if people try to forge links between her and JZZ all the time…
For the record, I have no idea where Cassie stands regarding JZZ.  I don’t know if she LUVs it, or merely TOLR8s it.  I mean, she does have three kids, so she must be a JZZ aficionado to some degree and knows good JZZ when she sees it.
Meanwhile, she totally got a post of her own out of it, completely at my expense.  You can see her version of this story by clicking here.  She’s got screen captures of all the emails.  She has the whole exchange.
And the comments are even better.  That’s where I learned that they were other interpretations to be made regarding the plate.  Mrs. Bachelor Girl and commenter “Emily” thought that JZZLUVR was meant to be JESUSLUVR.  And when I first showed the plate to Pinky, she thought it meant JEWSLUVR.  Thank goodness Red Pen Mama knows JZZ when she sees it.  Shows I’m not the only one with a mind in the gutter.
If there’s any good news to be had, it’s that I didn’t send Cassie the other Failblog picture I had in mind to forward.  Cassie’s from Minnesota, so when I saw this one, I knew she’d get a kick out of it.  So imagine that with the subject line of “Saw this and thought of you…” plus the JZZLUVR plate, I had also included this shot: 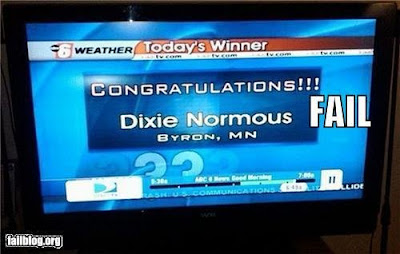 I’d say there would likely have been a cancellation for next month’s Darwinfish Fry.
Posted by bluzdude at 8:02 PM