I was emailing with blog and Real Life friend Bea the other day and we ended up delving into cartoons.  I think it started when I said she’d better hope I didn’t suggest that she take responsibility for another department’s documents:

bluz: You better hope I don’t recommend that!  (… twirling moustache and rubbing hands together in an evil manner…)

Bea: Snidely Whiplash, is that you?

bluz: At your service, um… (What’s the girl’s name that’s always getting tied to the tracks?)

It must have been really uncomfortable laying on the hard, bumpy track.  I mean, what if the train wasn’t supposed to come by that day?  She’d be out there a really long time.  There has to have been a better way of whacking someone.

And the poor engineer… I can just see him coming home after a long day… “Geez, there was another one out there today… I sure wish someone would hurry up and invent brakes.”

Bea:  Kind of like the MARC Train… all the passengers would be mad because Nell got hit and it held up their daily commute.

bluz:  Right… they all have places to go and gold to pan for… 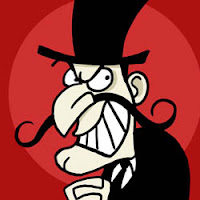 We veered off the tracks ourselves right about there but it made me start thinking about the cartoons of my youth, and where some of the clichés came from.  I mean, was that really a thing back then?  Murder by simultaneous decapitation and double amputation, via locomotive?  If Snidely Whiplash really wanted her dead, why not put a simple 2 in the back of her head.

Ooh, maybe he really WANTED to get caught by Dudley Dooright.  He might have had a “thing” for the big Mountie and wanted to volunteer to be his "mountee."

And it’s not just the cartoons.  Even as a kid, I used to wonder why all the super-villains felt the need to set these elaborate traps to kill Batman.  If the Joker would just put one minion behind a door with a .45, suddenly Gotham City would be a free-crime zone.  Obviously the cops didn’t know what to do, besides huddle up in the Mayor’s office and ring up the Bat Cave.  Even I knew that all they had to do was go out and arrest anyone wearing an elaborate costume or a long-sleeved t-shirt with horizontal stripes.

But every week, the crook would set up some ridiculous death machine that was more complicated than a Mousetrap game and just as reliable.  Maybe they wanted to be caught, just like Snidely. 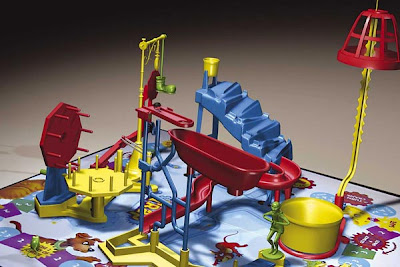 Catwoman was another story.  Prrrrrrrrrrrrrrrrrrrrrrrrrrr.  She used to tingle my loins and make my hormones fizz like a Mento in a bottle of Diet Coke.  Even in 3rd grade, I wanted to do things to her of which the ASPCA would not approve. 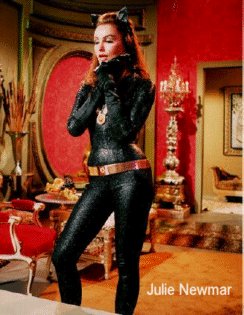 Batman wanted her bad; you just know it.  I noticed she seemed to get away more than the other villains.  That was good, because I wanted her to keep coming back.  (But to stop trying to kill Batman.)  And she totally could have kicked Batgirl’s ass.

But cartoons were always a big deal.  We used to live for Saturday mornings.  Rocky and Bullwinkle were cool, but once I saw them as an older guy, I realized that most of the stuff went right over my head.

Like Boris Badanov?  Yeah, I got that it sounded Russian and he was bad.  I obviously had no idea it was a reference to classic Russian literature.  If Boris had any sense, he would have spent less time chasing moose and squirrel and more time trying to peel Natasha out of that slinky purple dress. 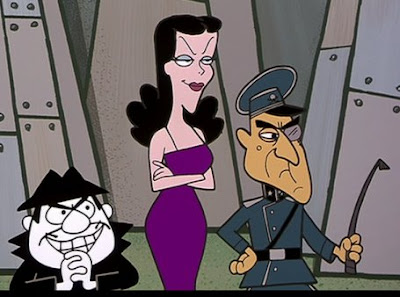 But I always liked the college they’d mention, “Whatsamatta U.”  They must have had a good debate team, since their name was in the form of a question. 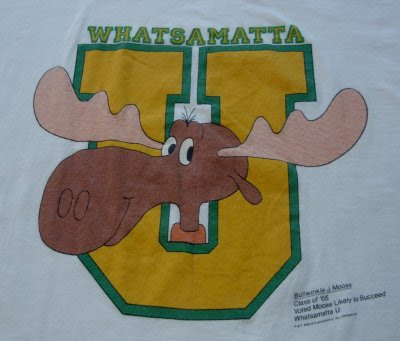 Ultimately, I was always a Loony Tunes boy.  I loved me some Bugs Bunny, especially the ones with Yosemite Sam or the Tasmanian Devil.  At the time, I was never partial to Foghorn Leghorn, but later I grew to really appreciate his one-line insults:

“That boy’s about as subtle as a hand grenade in a barrel of oatmeal.”

“Nice girl, but about as sharp as a sack of wet mice.”

When I was in college, Mel Blanc, the voice of the Looney Tunes, came to campus for a lecture.  No way would I miss that.  Nor did many other students there at the time.  He packed the Student Union ballroom with young adults that were dying to hear him talk about Bugs, Daffy, Foghorn, Tweety and the rest of the crew.  I tell you, he held that ballroom in the palm of his hand… just totally killed.

It sad that kids cartoons nowadays, suck.  And I mean that literally.  All the fun, mayhem and anarchy that characterized the cartoons of my youth has been sucked right out and replaced with sound moral values and product tie-ins.  Where’s the fun in that?  Tom and Jerry used to beat the living shit out of each other.  Same with the Roadrunner and Wile E. Coyote.  Now cartoons have to be about something redeeming like not hitting your sister, staying away from strangers, or learning Spanish.

The only decent cartoons left are for the grownups.  To me, South Park is the gold standard; kinda like the Simpsons on steroids.  Plus, they’re timelier.  If a big story breaks on Sunday, South Park has an episode on the air by Wednesday.

And any cartoon whose portrayal of Jesus that not only gives Him his own cable access show, but also shows Him in a pay-per-view boxing match against Satan, busting the boys out of an Middle Eastern jail and singing a medley of Christmas songs with Santa Claus, just doesn’t care about convention. 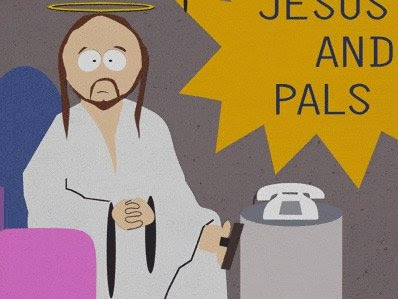 But on further review, maybe there was more to the old cartoons than met the eye.  As I was looking for a pic of Snidely Whiplash to use, I found this: 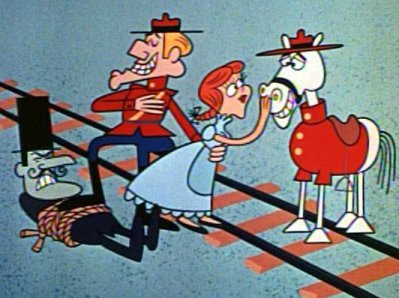 What I never understood as a boy is apparent here.  Snidely wanted to be walked on by Dudley.  Dudley was feeling up Nell, and she only had eyes for the horse.

Old cartoons were the best!
Posted by bluzdude at 7:18 PM