"Tito, Hand Me a Tissue"

Yesterday I posted a picture of my Raven’s Fan Therapy Station, which featured a giant garbage bag filled with tissues.  I captioned it, “Don’t ask how I came to have a garbage bag full of tissues.”
Naturally, that’s what I was asked, and by my Mom, no less.  I answered the question in comments, but thought I’d share the answer here because it reminded me of some other repressed childhood trauma.
In September, our company had a team building “Minute to Win It” competition for the execs, where they competed in a series of simple, yet challenging events.  One of the simpler ones was a race to see who would be the first to pull all the tissues out of a box, using only one hand.  Obviously, that left a huge pile of tissues lying around.
My department, who also set up the event, is instrumental in driving the company’s “Green” efforts. So I mentioned to one of our crew, “I hope you’re not planning on tossing all those perfectly good tissues…”  Next day, he showed up at my cube with a trash bag filled with tissues.  I’ve been taking out a dozen or so at a time and putting them into my tissue box on my desk.  I hate to waste anything… tissues, food, or opportunities to needle Ratbird fans.
So when the Steelers won on Saturday, it occurred to me that it would make a nice visual for my Ravens Fan Therapy Station.
In discussing this with Mom (via email) she said, “I have this thing about tissues because my Mom NEVER allowed them. (She would have recycled toilet paper if she could).  Now, I feel compelled to use every last one in a hotel room or anywhere they're available.  Forbidden fruit.  How weird is that?”
I think that’s very weird, but it explains a lot.  In fact, I said, it explains a lot about Exhibit 912 of Examples of How I Was Abused as a Child.  (Among them: the infamous Pop Tart and sugared cereal ban.)
My family never had tissues, ever.  I had to carry a hanky as a boy, and so did everyone in my extended family.  Sure, it’s cost effective, but it was also effective in making sure I was teased and looked upon with scorn by every girl that saw me during Fall ragweed season, winter cold season, spring pollen season and summer “everything” season.
Septembers were the worst.  You’re in your new class and kids are sizing each other up, especially me because for all the moving around we did, I always seemed to be the new kid.  It's pretty hard to appear cool when you have to honk your nose every other minute.  By lunch time, my hanky would be soaking wet to the point that it created wet spots on the outside of my pants pocket.
You know what the allergy snots are like… you just blow your nose and blow your nose and it’s just like a faucet.  There’s no “substance,” like when you have a cold, and there is absolutely no end to it.  It’s impossible to just blow it all out.
They used to give me “Allerest” allergy medicine sometimes, but that really didn’t do much for me.  I’m sure they called it “Allerest” because even when I took it, alla’rest of the kids in class were pretty much avoiding me.
By the time I was in junior high, I was taking Contac cold medicine, which was pretty strong.  Didn’t phase me though… sometimes I’d even have to take a second one when the first one didn’t work.  My brother, who had the same problems I did, couldn’t even take them at all.  One Contac would wipe him right out.
So even at the point that I moved out of the house, I always carried a hanky.  I remember when I was living in Cleveland, in my mid-20s, I got into a big row with my girlfriend because when she was doing the laundry, she threw my hanky in the trash rather than put it in the washer.  She said the thought of it made her gag.
We had quite a tussle about that… I was a broke record store manager living in Cleveland; I didn’t have the cash to keep throwing at new hankies.  Literally, hankies were all I knew.  I had absolutely no other frame of reference regarding how to handle frequent nose-blowing.  Not that my symptoms were really that bad.  I found that once I moved from rural NW Ohio to the more industrial environment of Cleveland, my allergy symptoms vanished for long stretches.  Maybe smog and pollution kills pollen, I don’t know.
Later, after we broke up, (not over hankies, but God, my life with her was an epic story… for another day), and I’d moved to upstate NY, her reaction stuck in my mind, so I bought my first box of tissues.  Leaving the poor air quality of Cleveland for the clean Adirondack air brought my allergies right back.  It didn’t take much longer before tissues were a new way of life. 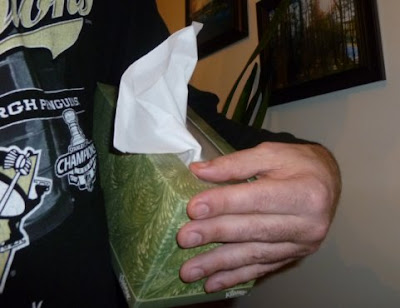 “You can have my box of Kleenex when you pry it from my cold, snotty, germ-covered hand.”
Like right now, I have 5 open boxes of tissues:
*  Dining room table (where I eat in the morning and also w/in reach of my PC.  Also, Pinky uses them for napkins, which drives me nuts.  The napkins are right there too, but she says it’s easier to pull out the tissues.)
*  By the couch for watching TV
*  By the bed, for the night-time sniffles
*  In my bathroom.  (These are the low-grade store brand ones that I use mostly for lining the sink when I trim my beard.)
*  On my desk at work (which is now fed by the Giant Garbage Bag’O Tissues.)
Basically, where ever I’m going to linger, I have a box of tissues near by.  Who wants to tear across a room to try to grab a tissue while you’re holding in a sneeze?  You can end up carpet bombing the whole place.
It’s funny though; I still carry a hanky every day, to take care of the occasional sniffle on the train, especially when it’s cold.  But more often, I use it to mop the sweat off my forehead (where there’s a LOT of room for sweat to accumulate) so I don’t stain my ball caps.
But best of all, they finally invented an allergy medicine that works for me, Zyrtec.  The funny thing is that a doctor prescribed it for me about 10 years ago it to control a chronic hive condition (yet another story).  Once I started taking them for the hives, I immediately discovered that my allergy symptoms had dried right up!  What a nice side effect, for a change.  It’s like finding out Viagra also makes you able to fly.
Lastly, just in case you were born after the mid 80’s (coughCassiecough) and you’re puzzled about this post’s title, it comes from Eddie Murphy’s stand-up comedy movie “Delirious.”  I was either going to call it that, or “Hanks for the Memories.”
You’re welcome.
Posted by bluzdude at 6:50 PM