I got an email this week about my dad’s doctor’s appointment and it totally cracked me up.

I know, you wouldn’t think that’s a topic given to laughs, but you don’t’ know my dad.

First of all, Dad’s a workout freak.  Every morning, he goes into his workout room, puts on a music DVD by the Stones, Santana, ZZ Top, George Thorogood, or the Dixie Chicks, gets on his elliptical trainer (it’s kind of like a low-impact treadmill), and goes for about a half an hour.

For the last year, Dad’s been having pains around his groin muscle that’s made it hard to lift his legs.  He stopped the exercise in hopes the rest would heal the groin muscle, but even after months it was still painful.  He’s been to a number of doctors but no one has been able to identify the problem.  He’s been taking steroids for it, and that alleviates the pain but as soon as he stops, the pain returns.

Anyway, he was finally diagnosed properly (inflamed bursa sac) and referred to a doctor at the Andrews Institute, who specializes in this particular malady.  This doctor has an outpatient procedure he does, so Dad got an appointment this week.  Mom emailed me about their high hopes that he’d be ready for the Steelers' Big Dance next weekend.

I wrote back that I was glad to hear it, saying  "He can’t be dancing in the streets if he has a bad groin."

After the treatment, Dad emailed me and told me about what happened when he made the co-pay for the procedure and examined the receipt from the receptionist:

“The full page receipt said my diagnosis was ‘Chronic Growing Pain,’ instead of Chronic Groin Pain.  You know me; I just couldn’t let it go.  So I go back up to the receptionist and asked if they had some kind of prejudice against short people.  She stammered when she was looking at the receipt and thought I was serious.  We all had a good laugh, anyway.”

And you all wonder where I get my wise-ass tendencies.  I totally would have done something similar.  I couldn’t have done the same joke though… no growing pains here… I’m 6’3”.  Now Dad on the other hand… He topped out long ago at 5’9” and has been shrinking ever since.  I expect one day I’m going to go look for him and all I’ll find is a pair of shoes with a Steelers cap sitting on them.

Last March when I did a couple posts about pranks, I mentioned some of the goofy shit my Grandpa used to do, but Dad was always yanking people as well.  I have no doubt it had an effect on me because I do the same stuff whenever possible.

This is one of my all time favorite stories, and also goes to show that nature must love a good prank, because sometimes all the cards fall just right.

Then shortly afterwards, between innings, the scoreboard lit up with a “Guess the Attendance” game and put up four answers from which to choose.

Some other people around overheard and wondered what was going on.  Louie explained to everyone how Dad had made some calculations and came up with one of those exact numbers.

On the scoreboard, they slowly eliminated one figure and then another, until there was nothing left but two numbers: my dad’s and another one.  Then the other one disappeared.  Dad totally nailed the attendance figure, right down to the person. 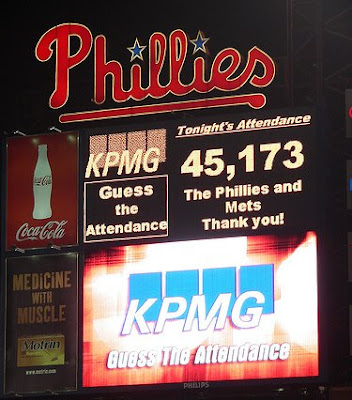 What no one there noticed was that a guy behind Dad was listening to the game on a transistor radio.  Earlier, Dad had overheard the announcer give the attendance figure and he jotted it down.  When Lou asked about it, he just pulled that calculations story out of his ass.  He didn’t know it was going to end up being a big scoreboard thing, but when it did, he just went with it.  Like I said, something in nature must love a good joke.

Naturally, that was the wisest course of action.  Remember, they were in Philly.  The fans there are not usually known for their consideration or understanding.

Thanks, Dad, for showing your impressionable sons how much fun it is to screw with people.  Life lessons don’t come any better than that.

*I have no idea what the actual attendance figure was; in the scheme of the story, it doesn't really matter.  I used this particular number because it matched the  one in the picture.
Posted by bluzdude at 5:18 PM