We all have favorite songs.  Some start out OK but then grow on you.  Others you may not even like at all, but you eventually come around.  And then there are the kind that the very first time you hear it, you know it’s a killer, an instant favorite.  Sometimes it’s one more song from an artist you already like.  Other times, it comes right out of nowhere and makes you find out more about the artist and maybe even a whole new genre of music.  There is a certain something about these songs that connect with you instantly, right down to your DNA.  It’s like you were programmed to like these songs and you just didn’t know it yet.


I’ve talked about a couple of these songs in the past.  In March of 2010, I wrote about the first time I heard a Joan Jett song, when my college radio music director handed me Joan’s first solo album and I dropped the needle on “Do Ya Wanna Touch Me,” which promptly melted my face off.  That one moment led me to a lifetime of JJ fandom and the opportunity to meet her a number of times.  And in that same post, I talked about going to an album release party at which I heard “I Hate Myself for Lovin’ You” for the first time and got to tell Joan herself how awesome it was.

This one also happened while I was on college radio.  I was already a big ZZ Top fan when “Eliminator” came out.  That was the album that put them into the stratosphere, fueled by their snappy MTV videos.  Right off the bat, radio put the first single, “Gimme All Your Lovin’” into heavy rotation and the local rock radio station was playing “Got Me Under Pressure” with regularity.  So when I finally got my hands on “Eliminator” for the first time during one of my air shifts, I started looking for something else to play.  Those 2 songs were tracks 1 and 2 on the first side, so I dropped the needle on the 3rd track, which happened to be “Sharp Dressed Man.”

In the first 5 seconds, I knew it was a hit.  Pow… power chords right upside the head, with a rollicking boogie beat and just a hint of synthesizer fizz.  I played the shit out of it long before it became the next single.  In reality, my playing it on our puny 15-watt college station didn’t do squat for the band, but in my mind, I broke that song, brilliant music video be damned.

Director’s DVD Commentary: I’m only using YouTube videos that play the studio versions of the songs, (where available) because that’s the way I first heard them.

In 1986 I was managing a mall record store when we got in this package of promo records to support an Electra Records promotion our company was running.  We were supposed to play these in-store and I was worried these would be ‘gloomy-music’ records… you know, that stuff that was popular in the mid-80s like Depeche Mode, The Smiths, Joy Division, etc.

But trying to be a good ‘company man,’ I picked an album out of the pack to try it out.  I’d never heard of the group before but their name was “The Georgia Satellites.”  The second the first song came on, I knew that this was no ‘gloomy’ album.

Wants to call you on the telephone baby, give you a ring.
But each time we talk, I hear the same old thing.
Always ‘no hug-GEE no kissEE until I get a weddin’ ring.’
My honey my baby, don’t put my love up on no shelf.
She said ‘don’t hand me no lines and keep your hands to yourself…’”

The song was “Keep Your Hands to Yourself” and by the time the first verse was done, I knew it would be a hit, with me, if not the rest of the country.  Its charming vocals, huge guitar riffs and primitive music video (that looked like it was made for about $150) made the Georgia Satellites a household name, at least for a short time.  I think they’re unfairly characterized as 1-Hit Wonders because they put out 2 more incredible albums full of fat hooks, barroom harmonies and sly wit.

In fact, there is a song on their second album, “Open All Night,” that also makes this list.  I was fairly certain I’d like their sophomore effort, but you never really know.  It’s hard to catch lightning in a bottle twice.  The album didn’t do very well, but not for lack of quality.  They had a couple of covers on this album, of songs they used to play in their early days.  One was a rockin’ version of “Whole Lotta Shakin’ Goin’ On,” which featured some rocking piano as required by anyone attempting to cover Jerry Lee Lewis.

But the piano was all over this album, including the next cover track.  The funny thing is that the first time I heard it, I had no idea it was a cover.  I’d never really listened to the Beatles’ “White Album,” so I had never heard “Don’t Pass Me By.”  That was a sing-songy tune sung by Ringo Starr, that wouldn’t have sounded out of place on a carnival calliope.  But in the hands of the Satellites, it became a full-speed romp of jamming guitars, big drums, and tight garage-band harmonies.  I loved it immediately and I tell you, the first time I heard the Beatles’ version, I laughed out loud.  It was like they weren’t even in the same species.


Discovering Stevie Ray Vaughan had opened me up to seeking out other blues guitarist and some of the most helpful devices were the cheap blues compilations put out by Alligator Records, the premier blues label in the country.  Two songs I first heard on these compilations made me instant fans of the artist.

For anyone that likes guitar, hearing a Roy Buchanan track can change your life.  Nestled on that first compilation was a track called “Short Fuse,” and it certainly lived up to the name.  The thing just blew up within the first 20 seconds.  It was like the old Batman TV Theme if it had been done by Jimi Hendrix.  Surf music meets screaming guitar strings.  There’s a point after the sax solo that Roy’s guitar comes tearing in and just howls in a combination of string-bends and volume.  In later years when I’d play it in the store, I’d grab one of my new people and say, “You want to know about Roy Buchanan, listen to this lick right here and that says it all.”

If you like guitar and only have time to play one video here, play this one.
It also cracks me up that these amazing sounds were produced by someone that looks like somebody's granddaddy.

The Alligator compilations also introduced me to the legend that is Albert Collins (who I wrote about here).  Most people don’t know the name, but if you ever saw the movie “Adventures in Babysitting” with Elizabeth Shue, Albert is the bluesman on stage that tells her, “Nobody leaves this place without sangin’ the blues…” 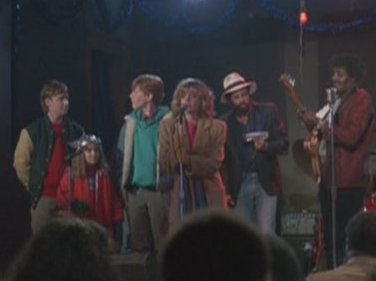 Albert’s on the far right.

I’d heard Albert on the first Alligator compilation, but the track that really grabbed me came on the second, a tune called “I Ain’t Drunk”.

“Every day baby/when the sun go down
I get with my friends/and I begin to clown.
I don’t care/what the people are thinking.
I ain’t drunk/I’m just drinkin’…

The lyrics would have been perfect for our Barn Parties… Lord knows we loved a good drinking song… and the rockin blues shuffle beat was infectious, topped off with Alberts trademark stinging guitar solos.  This song should have been on barroom jukeboxes all over America.  (And it will be, once I’m King.)

I’ve been saving the best song for last.  It’s a crime that so many people don’t know the name Johnnie Johnson.  Johnson was the piano player on Chuck Berry’s big hits back in the 50s.  The “Johnny” in “Johnny B. Goode” is actually Johnnie Johnson, only he rocks the keys instead of the strings.

In 1991, Elektra (again) put out a compilation of “new” artists. The first track up grabbed me immediately, with its easy-rolling piano boogie.  It sounded like the soundtrack to a party to which I would very much like to attend.

My first thought was, “Oh, my parents have GOT to hear this one.”

“Tanqueray” rolled on to sound even more like a party.  I found out later that Keith Richards produced the track and his solo band played on it as well.  By the time they get to the choruses, it sounded exactly like a bunch of well-lubricated raconteurs sitting around a piano bar.  And of course, any bar that Keith Richards is in immediately becomes the coolest place on the planet.

Keith and Johnnie go way back to when Keith produced a film about Chuck Berry called, “Hail Hail Rock and Roll.”  It not only spent time going into Chuck Berry’s past and present world but culminated in a big concert featuring Johnnie, Eric Clapton, Robert Cray, Linda Ronstadt and many others, all backed by Keith and his band.