Some Ideas are Good. Others... Not So Much

Earlier this week, an independent medical panel recommended that insurers be required to cover all FDA-approved contraceptive methods.            Finally, there’s something to put a smile on my face, after months of partisan hyperbole over the debt ceiling.  But of course no good idea ever goes unpunished.
If the issue is birth control, you can count on the Catholics to harsh our mellow.  The US Conference of Catholic Bishops immediately released a statement denouncing the proposal.  I’m not sure on whose behalf they’re lobbying, given that 99% of all American women have used contraceptives in their lifetime, including Catholics.  It’s an issue that cuts across all religious boundaries.
I think the Bishops are just trying to prevent a disruption to the current supply of altar boys for them to prey on.
Everyone wants to reduce the number of abortions that happen in this country.  You would think that birth control would be something that liberals and conservatives could agree on.  But no.
At least the Catholics come right out and say it… that it’s against the tenets of their religion.  The rest of the religious and social conservatives are sneakier.  They just try to cut off funding for anything sex-related.  Funds for Planned Parenthood?  Under attack and cut off in several states.  Funds for sex education?  Slashed everywhere.  Viagra?  Slash… wait a minute.  Nope, you can get your insurance to cover Viagra.  Or Cialis, Levitra and Bonerol.  (OK, I made up the last one, but wouldn’t that be a great name?)
So it’s just the sexual issues for women that are under the gun…  The New Hampshire Executive Council just voted to cut off funding for Planned Parenthood.  One of the council members, Raymond Wieczorek said, “If they want to have a good time, why not let them pay for it?”
Right.  And the reason that you can get insurance to cover E.D. drugs is…?  The double standard is staggering.  And not to mention the other oft-lost fact that Planned Parenthood offers reproductive heath care of all types, to women with no where else to turn.  Single mothers, college students, low-income married women… all turn to Planned Parenthood for help.
How much more expensive is the alternative?  How much do you think it would cost New Hampshire if all the women that seek birth control had babies instead?  How much in food stamps, WIC, Welfare or Medicare?  It’s the very definition of “penny wise and pound foolish,” with a twist of Puritanism thrown in.  Birth control is chicken feed.  Raising a child for 18 years is some serious cash.
So if all of this wasn’t enough to get my blood pressure rising, there’s this.  Rep. Steve King of Iowa said on Twitter today that President Obama could be impeached if the US defaults on its debts.  Rep Tim Scott of South Carolina suggests that Obama could be impeached if he raises the debt ceiling without Congressional approval.  (Like Sen. Mitch McConnell wants him to do.)
I swear, these guys will do absolutely anything to reclaim the White House, including, apparently, holding their breath and throwing a tantrum if they don’t get their way.  Are we really going to use impeachment to settle purely political debates?  Oh wait, we already did.  See “Clinton Years: 1998-99.”  Until now, I thought we learned our lesson.
If I’d have known we could impeach for policy arguments, I’d have been railing for impeachment when Bush neutered the Justice Department, tied the Department of Energy to the coat-tails of the Oil and Coal Industries and gutted financial regulations that opened the door for our entire fucking banking industry to collapse.
Now, the Republicans seriously want to impeach if they are successful in blocking the President’s every move?  Surely the American People will see through that right?
Right?
Anyone?
Sigh. 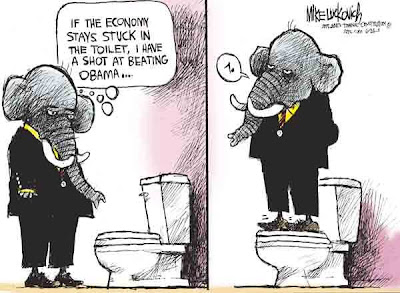