One of the weird things about hitting a milestone age is when you can compare it to where you were when someone else hit the same age.  When I turned 50 last weekend, I couldn’t help but think of when my dad did as well.
It’s like, “Oh my God, I’m the same age as when THAT happened!!”  At 50, my dad was the Elder Statesman of our tribe.  Whatever was going on, Dad would know how to fix it (or make it go away), and that went for family and our extended network of friends and neighbors.  Our house (and Barn) was the nucleus for the entire neighborhood and that wouldn’t have been possible without the permission and oversight of my mom and dad.
And now I’m that age?  Geez, where’s all the wisdom?  Does it creep up or does it drop on you all at once?  I’d hate to be walking down the street and then all of a sudden, WHAM!  A generation full of knowledge hits me full blast.  I’d probably end up wandering into the street from the impact and get run over by some typical Maryland driver who is texting and eating an Egg McMuffin at the same time.  Or a sharp-eyed Ratbirds fan.
So when Dad turned 50, we hatched an insidious plan to throw him a surprise birthday party in Pittsburgh.  I think it was his sister’s idea.  Mom was in on it too.  But we were living all over the place, so meeting up in Pittsburgh was going to take some coordination.  And first, we needed cover stories.
See, all Dad wanted for his birthday was to get his family together in one place and go out for a nice Segnari’s fish sandwich.  You may remember that the Big Fish Sandwich is a staple in our family.  We never pass up a chance to catch one when we’re in town. 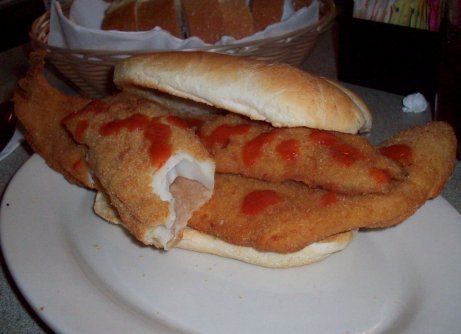 You can see why…
My brother, sister and I all formulated cover stories that made it so that we had to miss his birthday on the Friday, but could make it to Pittsburgh the following day.  And we all gave work-related excuses, knowing that he would want us to fulfill our working obligations.  I was managing a record store in Cleveland so I had a million excuses on hand.  I think I said that we had a home office exec coming in for inspection.  I don’t remember what my brother and sister said, but it was something similar.
We also put the word out to our old neighborhood friends and invited them out.  I think it really said something that 4 young adults made a 4-hour trip from Toledo just to come to a neighbor-dad’s birthday party.  That tells you something about the bond we all had.
Anyway, since none of his children could “be there” on his birthday, Mom and Dad were going to go to my Aunt Grace Ann and Uncle Ange’s house.  Uncle Ange was going to pick up a bagful of fish sandwiches and they’d have a quiet dinner ‘in.’ In reality, the house was stocked with family and friends, with an entire Italian buffet spread laid out in the garage.
Also, as it happened, Ohio State was playing at Pitt that Saturday, and between my cousin Nikki who was attending school there and her Dad (Uncle Ange) who had connections, they were able to get a fistful of tickets for the game.
The big moment finally arrived.  We were all huddled downstairs in the den when Mom and Dad came in.  I heard Uncle Ange say, “Yeah, the fish sandwiches are downstairs…”
Dad came downstairs and then, “SURPRISE!!” 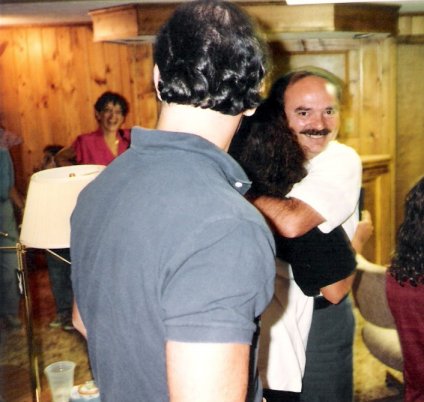 I think this was the last time Dad didn't wear a beard.
There stood his evil children, old family friends and every aunt, uncle, niece, nephew and cousin in the Pittsburgh area.  And what was his reaction to all this?
“But where are the fish sandwiches?”
I’m not totally sure if he was kidding.  But it’s not like he didn’t get a good birthday meal… 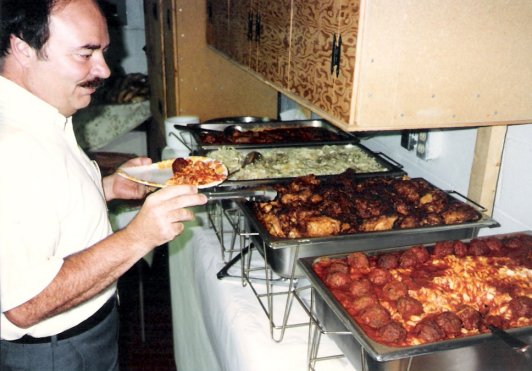 There were tables set up in the garage and we had quite a feast.  I was concerned, however, that the Toledo delegation had not yet arrived.  Knowing how difficult it is for the uninitiated to get around Pittsburgh, I was quite certain they were on a ramp somewhere, sailing off in a direction that they didn’t want to go.
But before long, our friends Margaret and Jennifer rolled in and totally surprised the guest of honor. 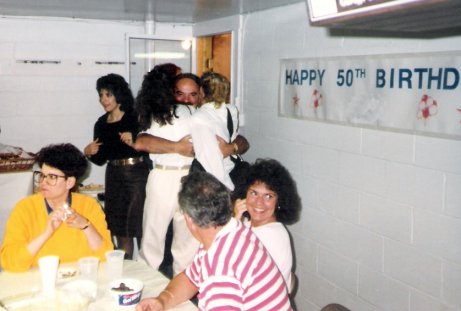 There was another surprise as well, as someone had arranged for a traditional belly dancer to come provide entertainment. 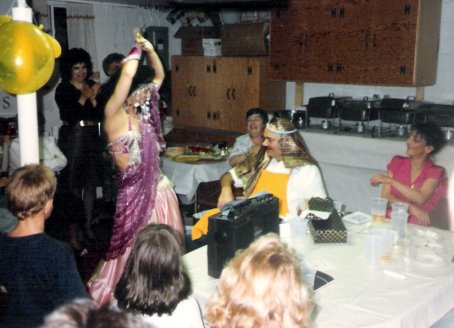 It was not a surprise, however, that my buddies Rik and Brill came in right behind the belly dancer.  Rik said he saw her on the street and knew that she had to be going to the party.  I suspect he was just being polite, and would have followed her to any party she was attending.
The rest of the night was filled with eating, drinking, dancing and assorted carrying on. 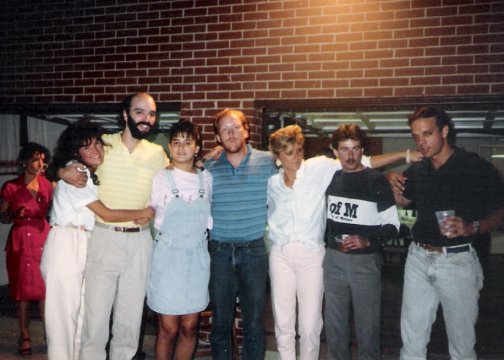 The Young Guns.  From L to R, Margaret, me, Nikki, Rik, Jennifer, Brill and my brother Ed.  And that’s Mom lurking off to the left.
Geez, we were so freakin’ young.
The next day, Mom, Dad and all us young’uns went to the Pitt/OSU game, which was the first college game I’d ever been to that wasn’t in Ohio Stadium.  And the kicker was that as a birthday present, Dad got a pair of tickets to Sunday’s Steelers/Bengals game.  Ed had been to a Steelers game in Pittsburgh before so I got to go to this one.  It was my first football game at Three Rivers Stadium.  The Steelers were kind enough to win it for us too.
It’s hard to believe that now I’m the very same age that my dad was on that occasion.  The differences in our accomplishments at 50 are distinct.  At that time, he had three children spun out of the house and on their own.  He was accomplished professionally and was living a comfortable life.
I sit here now in a 2-bedroom apartment with many failed relationships and a busted marriage in the past.  While I’m doing OK now, my job history has been checkered.  I don’t have kids so the closest I have to a legacy is, well, you!  And I thank you for that!  Writing this blog has been the most fulfilling thing I’ve done since I can remember.
So I’ve got that going for me, which is nice.  It’s funny, though, because even way back in 1988, we were making jokes about sending my folks to go live in The Home. 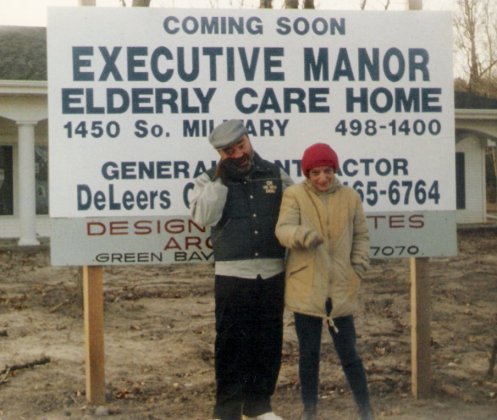 It's always good to make your retirement plans early.
I don’t think I’ll be able to afford The Home.  I’m planning on retiring to my friend John’s garage.
The Mojo Boogie
My Steelers haven’t looked to good lately, so I’m shaking some things up.  First of all, I banished the Steelers Gnome back to his earlier spot on my desk.  Next, I’m digging out one of my old game jerseys, the old black 86.  When I got it, it was an Eric Green jersey.  But at the time, I never had a name put on the back.  A couple years ago, I finally had Hines Ward’s name put on.  I believe he wore the jersey with the block numbers for one year, as a rookie, before the Steelers switched number styles.
Anyway, I attended a whole butt-load of Steeler games while wearing this jersey, so maybe there’s some mojo left in it.  And maybe there’s some left in Hines too. 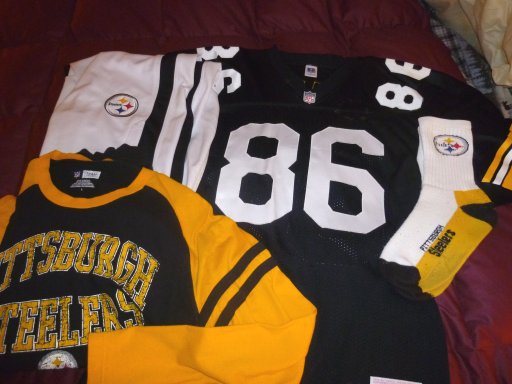 Late Update:
The old mojo worked like a charm as the Steelers whupped up on the Titans 38-17.  Unfortunately, I picked the Titans in my weekly picks.  In fact, I got killed in the early games on my picks this week, going 2-6.  (And the late games haven't started out my way either.)  It's tough because I make my picks without thought to who I would want to win, otherwise.  That leaves me in a hard "rooting" position, as I can either root for the team I like (or would help the Steelers) versus the one that will make me "right."  It's uncomfortable rooting to be wrong.
Posted by bluzdude at 12:22 PM