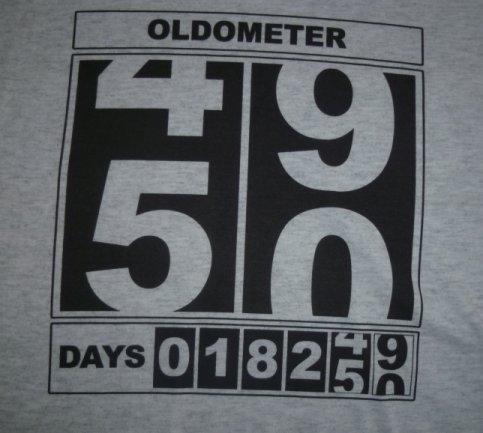 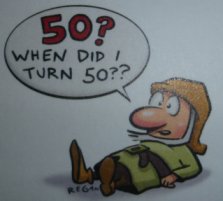 It’s days like this that make the irritations of Facebook seem worthwhile.  Since I got up this morning I’ve been greeted throughout the day by Facebook birthday wishes.  I know it’s a simple thing but it makes me happy that that many people took the trouble to tap out a few words.
I also noticed that it’s mostly all women.  Dudes don’t really notice your birthday unless it pops up right under their noses.
This morning, Pinky told me she arranged an “event” for me this evening.  I’ll tell you more about that once I know more about it.  I know it will involve other people but I don’t yet know who they will be.
But I’ve already received my favorite birthday present… Lots of blog hits.  Ever since Thursday, I’ve noticed a spike in Google search hits about Lawrence Bishop, whose church I wrote about last year when his 62-foot Jesus statue got hit by lightning and burned to the ground.
When I finally got around to doing a Google search on him myself, I learned that he had been found unconscious and taken to the hospital on Thursday and died Friday night without regaining consciousness.
Wow. Lightning strikes his statue one year, the next he basically drops dead. There's some serious karma, right there. If I were Mrs. Bishop, I'd think about folding the tent right now. But I'd be surprised if she did. That church and the Bishops are intertwined. I don't see anyone else stepping in to run things, nor do I see Mrs. Bishop taking this as any other sign but "God needed him right now, because he's so special."  (My words, not hers.  Those are “air bunnies.”)

I don't wish death on anyone and I'm sorry for their family's loss, but I would not be upset in the least if that nest of thieves closed their doors for good.

Let people send their money to some place that would actually carry out Jesus's word... like a place that would feed and clothe the needy, or provide a place to spend the night.  I’m pretty sure that Jesus never said, “Go out and have people give you money so you can build a giant church, live in luxury and ease your conscience by putting up a gaudy statue of Me.”
Anyway, I’ll take the hits.  But speaking of Google searches, a found a couple more doozies that landed people here this week:
“Angry bacon of pussy.”  I just don’t see “angry” being an appropriate word to go with bacon or pussy.  I’d go more with “delighted!”
“Honey badger sleepy fuck.”  I don’t know what the hell that is supposed to be.  Is “honey badger” a euphemism with which I am not familiar?  Like, “Oh baby, whip that honey badger on me…”
“I am a poon man”  Sounds more like a super hero… “I’m Poon Man!”  Brought to you by Summer’s Eve…
I don’t know what’s wrong with people… But back to the birthday track…
I opened a package from Bluz Sister and I pretty much knew what it would be, but still I was stunned by the beauty. 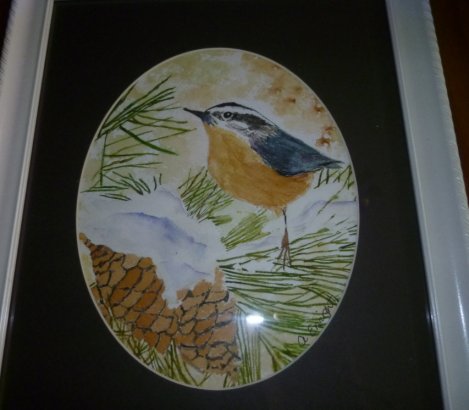 Bluz Sister knows I love pictures of birds and she did a nice little Baltimore Oriole for me, perched on a snowy pine cone.  I really wish I had that kind of talent.
I guess I’ll just have to take solace in writing my goofy stories in this little corner of the Internet.  So if you wished me happy birthday via Facebook, thank you.  You brightened my Saturday.  And if you haven’t, what are you waiting for?  Hit the comments below!
Lastly, Happy Birthday to Jessica, who today turned… much, much less than 50.  You rock, Blog Sister!
Posted by bluzdude at 5:15 PM

Happy birthday! I hope your event is fabulous and does not result in anyone ending up in the police blotter!

I will be 40 in just over two months (tick, tick, tick), so I can relate to a big milestone, though obviously I am MUCH younger than you. Old (cough) old! :-)

(I have found that hurling insults followed by a smiley face makes it okay.)

Thanks Facie! Had a great time; details to follow.

It's always a big deal when you have a birthday that changes that lead digit. Man, I was just getting used to the "4."

Second try today---I expect a full report on your next post of your birthday bash with your "three favorite wimmins!"

Judie,
The full report will be up Tuesday evening. (Short version: I had a great time.) Sorry Blogger is being wonky.

(For the record, Jessica is 2 months and 11 days older than me. Just saying.)

Well, hey, happy birthday! I was actually a little tempted to remove my birthday from Facebook just to avoid people I haven't spoken to in 10 years halfheartedly wishing me a happy day next weekend, but maybe I should stop being such a curmudgeon and follow your example.

Happy Birthday Bluz! Your blog search terms cracked me up.

I hope it was a great one!

Cassie,
Now kids, lets not fight. But thank you, Sweetie. I know how you hate hugs.

Mundane,
Thanks, Katie. Yes, open your heart to the love, as transient as it may be. Beats a sharp stick in the eye.

As far as being a curmudgeon... if through my writing, I can inspire someone to insult someone, or cut some idiot off in traffic, I feel like I've done my job.

Jessica,
Hey, I had nothing to do with those terms. I'm just the recipient here. It's the free range morons out there that are looking up such strange stuff.

And I just got a new one today that I can't keep under my hat... Someone found me by searching on: "A Fucking fish just touched me!!!"

Yes, there were really 3 exclamation points.

Hope you had a great Bday too.

Good job on sounding 50, on that comment. You need to add in, "Get off my lawn," and quit those shenanigans."

Bluz: As far behind as I am on my blog reading, I'm glad to see I'm only a couple days late on the birthday greetings. I'm presume you enjoyed eating supper at 4 p.m. and falling asleep by 9?

(Am desperately trying to find humor in the 50-thing. I'm only days behind you.)

Well Happy Birthday, Bluz! You look ten years younger than you are. I know, everybody says that but in your case it's true. Hope you had a grand time!

Happy birthday, dude! I remember hearing about that lightning strike when it happened. For some reason I thought I read about it here, but couldn't find my name in the comment section. Alas, my memory is crap.

Cassie,
Ouch! Now that’s an insult. (Although Shenanigans are some of my favorite things.)

Sherry,
Actually, I DID have dinner around 4 yesterday… pizza during the football game! But that won’t be a regular occurrence, unless I can get a regularly catered dinner at work.

At least by the time you’re fifty, you will have accomplished something tangible… I mean, you’ve had 2 kids and successfully spun them off into the world. That beats anything I’ve ever done.

Cher,
Thanks! I don’t know what it is… can’t be clean living or health food…

Brendon (Beers),
That was a huge issue on this site… I don’t think you were following me last June. All started when I saw the statue and was totally creeped out, so I did a post… then the next thing I knew, the damned thing burned down. I thought it was hilarious. A true “sign from above.”

Anyway, I definitely had some beers… the “good” part is debatable. But I liked them.

You now have the authority to say, "I KNOW this shit, man. Just do it!"

Reeik,
Thanks dude. And is that “tails” or “tales?” Knowing you, it’s probably both. I’ll be sure to put them in your memoir.

"Delighted bacon of pussy" is going to be my new catchphrase.

Mrs. Bachelor Girl,
Angry Bacon of Pussy would be a great punk rock band name. But you should definitely mention Delighted Bacon of Pussy at your next Republican Women's Tea and Scones brunch... You can get away with anything right now by blaming it on hormones.

Was TRYIN a play on spellin not that I could keep up on your BLOG wittyiness or ability to weave a story .... Nice pic Sitcom Wilson/Kelly ...

Happy Birthday Bluz! (Didn't you celebrate with your buddies in Ohio a month or so ago? I'm getting deja' vu about wishing you a happy birthday.)

Angry bacon of pussy? I think that sounds like the photo on my recent post about the 66-year-old bacon looks. Scary.

Kernut,
Yes, this summer we had the big communal celebration, but I hadn't actually turned yet, while my buddies had. Saturday was my actual Honest-to-God birthday, which include cake, presents and wishes. I apologize for the deja vu.

Wow. Count me in as a dude who just had your birthday pop up in front of my face. Big 50. That's the wall I'm hitting in February. Way to go, Pioneer Man. (better than poon man.)
Hope you had a great time and find that life on the downhill side is just as nice.

Carpetbagger,
I consider it like skiing... it's only fun when you're going downhill. Of course that's also when you're most likely to break a bone.