I’ve mentioned before that one of my job responsibilities is to set up the audio systems for town hall meetings and other gatherings in our cafeteria.  One of the by-products of this task is that I get to here some interesting presentations on occasion.

This week, our company was hosting an event on behalf an organization called Vehicles for Change.  This is a local service that takes donated cars and sells them for a low cost, to people in need of reliable transportation.  This particular organization is local to the Baltimore area, but there are other similar groups around the country.

The thing is, these are not handouts.  People can apply for these cars and if accepted, they are given low-interest loans to cover the cost of the car.  But they have to pay the loan back through regular payments.  So not only do they earn their car, they establish credit too.

Now I’ve heard of these kinds of organizations for years and I’ve never thought much about them.  But the event we put on did an outstanding job of driving home just how important a car can be to a single mother or struggling family.

Vehicles for Change gathered six local “celebrities” and matched them up with a recent car recipient.  The celebrities included a couple of writers from the local papers, one former football player (who I didn’t recognize but he was huge), a member of the State House of Delegates, and the biggest star (to me) Jane Miller, who is an investigative reporter for a local TV News team.  Besides Mike Wallace in his heyday, Jane Miller is the person around here you least want to see show up on your doorstep with a film crew in tow.  That can only mean that you are about to get your ass handed to you.

Together the celebrities and recipients would perform the daily tasks that the recipient had previously done without the use of a car.  For example, one pair went grocery shopping with a 2-year old child.  Another pair had to catch three separate busses in order to get across town to the recipient’s job.  Another went to a doctor’s appointment.  Along the way, they encountered the usual troubles: busses that were either late or didn’t show, cramped quarters, having to carry heavy groceries, and knowing that no matter how early they started, they would likely arrive late to their destination.

Then at the event, the celebrities described their experiences.  Most had never been on a public bus before.  They were unanimous in stating that they would never use such means of transportation themselves, if they didn’t absolutely have to.

I got the feeling that a lot of people in the room felt the same way.  I take public transportation every day (the subway) and I had never really thought about having to go about my entire daily life without a car.  I may complain from time to time but the subway is fairly reliable, running every 8 minutes during rush hours.  The busses?  Not so much.  Then factor in winter weather, and waiting for busses that run late or never show becomes a tiny slice of Hell, only frozen over.

Jane Miller made several strong points about the need to upgrade Baltimore’s rather haphazard mass transit system, where there are 3 modes of transit (bus, subway and light rail) and none of them link directly with each other.  I liked this point because it addresses a root problem: if the transit system were more effective, the need for cars would decrease.  And the fewer the cars, the less congestion and pollution is created and the less energy is burned.

But back in the real world, the numbers bore a car can mean for a low-income family.  The stat that stuck out most in my mind was that for the recipients of these cars, the average reduction in daily round trip travel time was 90 minutes.  That’s an extra hour and a half a day to do things… go shopping, play with your kids, or take them to school events.

After receiving the cars, these people could then obtain better jobs that aren’t tied to proximity to bus routes.  And they could work longer or later hours when they don’t have to worry about taking their life in their hands waiting for a late-night bus.  Some people have been able to take their kids on a real “vacation,” a concept that is pretty much impossible if one is tethered to public transportation.  One of the speakers said he coached football and noted that he’s never had a single player whose parents didn’t have a car.  Can’t count on the bus to get kids to practice… Having a car makes after-school activities a possibility.

In most cases, the recipients’ lives improved to the point that they were able to buy their next cars on their own.  That’s a real difference in a person’s life.

I’m no pie-in-the-sky do-gooder… I usually leave that stuff to people that are good at it, like Ginny at That’s Church or Michelle at Burgh Baby.  But as I was sitting through this event, I couldn’t help but feel moved by the stories.  I’ve never even thought about donating a car before but now I would consider it.  The donated vehicles are tax deductible for their full value and not for the marked down price at which they’re sold.  I suppose I’d have to wait until I can actually stop filing the short form, when I finally move into a house and have some real, live deductions.

And I’m not trying to get heavy and guilt people into writing off their cars, in lieu of selling it for cold hard cash.  I only want to point out an actual opportunity to help make a person’s life better, in tangible terms.  Chances like that don’t come along every day.

And now, I promise that with my next post, I’ll be back to the sophomoric humor and goofy word play for which I’m customarily notorious.

In fact, let me drop a few more goofy-assed Google searches that have landed people here this week.

Search for Reality
A fucking fish just touched me.  I’ve been getting this one like crazy and it’s probably my own fault.  I got it once, then mentioned it in Comments, a couple posts back, and now I’m getting a half-dozen a day.  There must be some kind of picture out there with that as a caption.  I Googled it myself but couldn’t find anything.

Why do girls laugh at balls?  From Australia.  Answer: because they’re funny-looking.  Mystery solved.  So why not draw faces on them, just to be in on the joke?  (Since the query was from Australia, I was going to say, “Because they hang Down Under.)

Fox News makes you stupid enough to vote Republican.  From Georgia.  I don’t find this search weird at all; I note it here because I agree with it.

How to make a tampon out of tissue?  From Ireland.  Must be some kind of emergency.  I forgot to check if the search was from a phone.  But the bigger issue is why did it bring the searcher here??  That’s not exactly in my wheelhouse.

Body building Mexican pout.  I have no idea what that could be for, and again, why here?

Hello Kitty pussy spray.  From Toronto.  In April, I posted this Failblog picture: 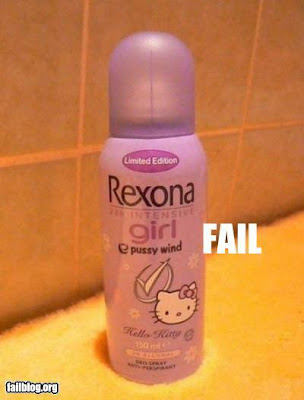 I hope to God that’s what they were looking for; otherwise, that’s just plain skeevy.