I read today that deer hunting season is coming up next month.  In my dad’s family, this used to be a pretty big deal.  Grandpa used to have a hunting cabin somewhere in Pennsylvania and they would go out every year and go a’huntin’.  A successful hunt always meant venison steaks and sausage.  As you know, I’m down with the meat.

My dad was never really into it, so the hunting bug was never passed on to me.  And it’s a pretty good thing he never tried because it wouldn’t have gone well.  I went hunting on my own one time and there’s a reason I only went one time.

I was about 8 years old and we were living in Glen Ellyn IL, which is a western suburb of Chicago.  (Yo Carpetbagger… Glenbard West represent!)

I had a friend down the street named Mike and he was 11.  To me, that meant he knew everything.  There was nothing that Mike couldn’t handle and I trusted him implicitly.  So one Saturday after a winter snowfall, Mike asked me if I wanted to go rabbit hunting with him. 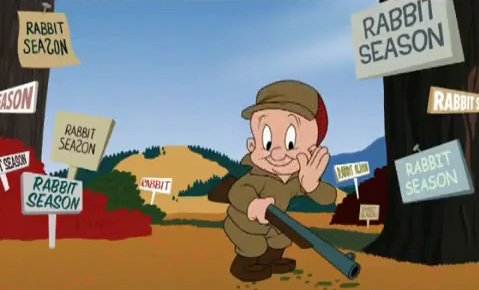 He had a pair of bows and a bunch of arrows we would use.  These were not toys, these were actual hunting bows and dart-tipped arrows.  We had played with them before, just shooting targets (trees) in his back yard. 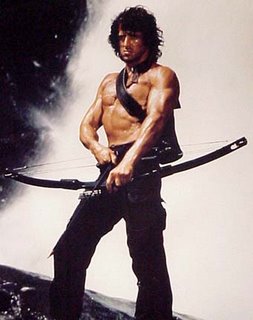 OK, they weren’t THAT badass, but they could do the job.

Remember, this was 1969… it wasn’t unusual for kids to have weapons to play with.  Lawn darts were still legal, after all.  And I could play a mean game of lawn darts; why wouldn’t I be able to shoot an arrow?  The trick was going to be getting permission to go.

Because I was all dressed for snow and didn’t want to take off all my stuff to go inside and ask, I just stuck my head in the back door and hollered for Mom.

Little 8-year old Bluz: MAAAAWM?  CAN I GO RABBIT HUNTING IN THE WOODS WITH MIKE?

Mom: NO!  YOU ARE NOT GOING HUNTING!

I conferred briefly with Mike.

Little 8-year old Bluz:  MOM? CAN I GO IN THE WOODS AND LOOK AT RABBIT TRACKS WITH MIKE?

Mom: OK, be home for supper.

We grabbed the bows and arrows and went rabbit hunting in the woods.  How the hell did that work?  My dear mother was so trusting.  And of course I never lied.  Well, almost never.  (Sorry Mom.)

So we went off to the woods and began stalking our prey.  There were tracks everywhere, so we actually had a chance of catching some action.  At one point I saw a rabbit run across my path way up ahead and shot an arrow, missing badly.  If only I’d had a lawn dart…  Still, it was exciting.  We continued the hunt.

I froze.  There was a brown rabbit sitting still, facing us, about 20 feet in front of us.  Mike calmly pulled an arrow back and aimed. 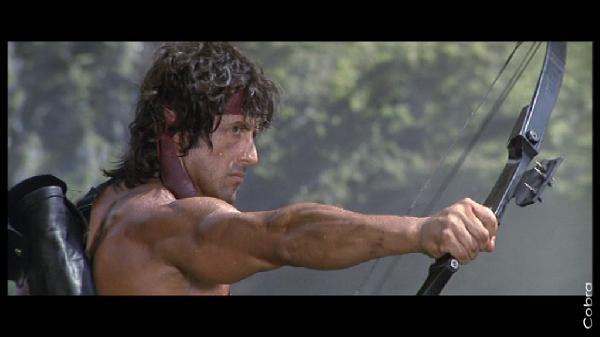 He took a breath, then released the arrow.  It whistled out, flying straight as an… well, you know.

The arrow went right over the rabbit’s head and hit it dead square in the back.  It was an unbelievable shot.

I never knew that rabbits could make noise.  But holy shit, this one sure did.  I’m sure I’d make some noise too if I had an arrow rammed through my back.  Jesus, it was deafening.  My little head was spinning and I started panicking.  My frame of reference for hunting began and ended with Elmer and Bugs.

Mike stood right over top of the rabbit and started shooting more arrows into it, but still it kept up that awful keening.  I yelled at Mike to stop.  He said he had to finish it off and that we couldn’t save it.  He used all of his arrows and still the noise continued.  Then he started pulling arrows out of the rabbit to shoot again.  That made me start to cry.  I suppose I understood what he had to do and I really needed the noise to stop, but it was tearing me up inside.  I guess I was a bit fuzzy on the reality of the whole hunting experience.  Eventually the poor little thing died and all was quiet again in the woods.  There were tears on my coat and blood on the snow.  It was the most gruesome thing I’d ever seen.

Mike put the rabbit in a bag he had brought and we walked silently home.  We took the body back behind our patio in the back yard, where Mike skinned it.  I don’t know where he learned how to do all that stuff.  But like I said, he was 11; he knew everything.

We left the skinned carcass under a big loose rock that ringed our neighbor’s flower garden.  I think Mike kept the pelt and gave me one of the feet.  I threw it out as soon as he left.  I didn’t want to be reminded of that day ever again.
Needless to say, I never went hunting again.  I don’t criticize those that do; I understand that sometimes there is a need, be it herd management or safeguarding against dangerous animals encroaching on a neighborhood.  But it’s not something I can do.

If I’m going to shoot any wildlife, it’s going to be with a camera.

To take us out on a lighter note, check out this take on hunting by 1950’s raconteur and scamp, Tom Lehrer.

(Go ahead and click it.  It’s only a minute and a half long.)

“I always will remember
Twas a year ago November
I went out to hunt some deer
On a mornin’ bright and clear.
I went and shot the maximum the game laws would allow:
Two game wardens, seven hunters, and a cow.”
Posted by bluzdude at 7:29 PM