I had no intention of writing this post when the story first broke.  I figured it would be the usual drill… Overfed blowhard Rush Limbaugh would cause a stir by saying something stupid, get some press and then backtrack by saying he was an entertainer and was just kidding.

But the longer this storyline played out this week, the madder I got, until here I am; angrily pounding out a screed about this degenerate attention whore.

I don’t want to go into a blow by blow of this story; I’m sure everyone knows who did and said what.  (Or you can click here for a fairly complete synopsis.)  But suffice to say; in commenting about Sandra Fluke, the Georgetown student that the Democrats asked to testify about the cost of contraception (and was refused permission to do so by the Republicans), he literally called her a slut and a prostitute.  As the outrage began to build among thinking, rational people across the country, rather that reeling it back, he doubled down, continuing his verbal assault on the young woman’s character and morality.

Normally I still wouldn’t be writing about it because he is just so obviously and provably wrong.  And I’m sure even HE knows he’s wrong on the facts.

Even a cursory search of the story will tell you that Ms. Fluke was taking birth control pills for a medical reason involving hormones.  It had nothing to do with sexual activity.  She was to testify about the prohibitive cost of the prescription relative to her meager income as a grad student.

Limbaugh knew this, but made it about sex anyway.  Sex sells, and it’s red meat for his overwhelmingly white, male, under-educated followers.  (OR, white, male, filthy rich and willing to justify anything in order to keep it that way.)

In pushing the sex angle, he went on about how much sex she must have had in order to justify so much birth control.  Obviously, it doesn’t matter how much sex one has for the pill to work.  You take one a day for as long as you need it.  It doesn’t matter if you have sex every hour, once a day, once a month or once a year.  The cost of being one the birth control pill is the same.

Rush knows this too.  Hell, he’s been married four times; he knows how birth control works.  (Although I will allow that with him, birth control may merely consist of him taking his clothes off.) 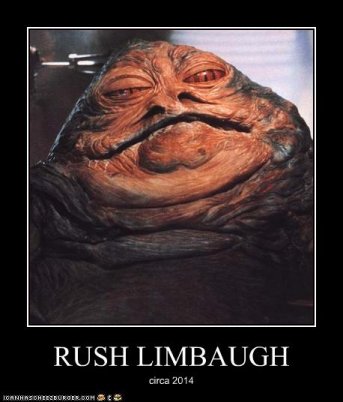 Why would he labor a point that’s so off the mark that a junior-high school kid could pick it apart?  (You know, IF he were allowed to attend his health class that cover sex ed.)

At the moment, public pressure has resulted in a number of sponsors cutting their advertising with his show.  I guarantee that he is not worried about that.  Those sponsors will be right back as soon as the heat dies down.  And in the meantime, other advertisers have stepped in. I wouldn’t mind knowing who is still advertising there, but not so much that I’d actually listen to his show.  I wouldn’t listen to that horse’s ass if a $20 bill sprung, ATM-like from the radio, for every minute I was tuned in.  What good is money if you keel over because your brain exploded?

Some Republicans have issued half-hearted rebukes, but nothing with teeth.  Boehner’s flak tied in a mention about how it is also wrong for the Dems to be using this issue to raise funds.

So what’s Limbaugh’s game here, besides getting himself talked about all over the media? Perhaps he has a “Trading Places” type bet with Dick Cheney.  Maybe Rush bet that he could make a juicy but ridiculous assertion, double and triple-down on it and come out none the worse for wear on the other side.  And if some girl’s life gets turned upside down as a result, who gives a rip?  As far as he’s concerned, she’d deserve it for having the audacity to try to testify on birth control and be female at the same time.

I really feel for Ms. Fluke.  I mean, here she was, trying to do what’s right for her country and her gender, fighting against a stacked deck just to be allowed to testify, which she was asked to do!  Then out of nowhere comes this jowly attack dog slinging mud at her with ludicrous accusations and smears.

That’s why I’m so happy that President Obama made it his business to call her and offer words of encouragement.  It’s the very least he could do for a woman that just gift-wrapped a can’t-lose campaign issue for him.  If I were Obama, I’d find her a job with Kathleen Sebelius in the Department of Health and Human Services.  Or as a campaign spokesperson.

And I can line up some expert testimony on that, for the next Senate hearing. 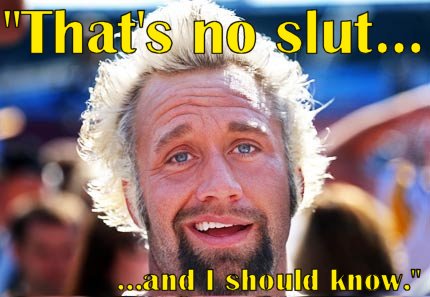 Former Steelers kicker, Jeff Reed, who knows a thing or two about sluts.