Winning the Mega-Millions: An Alternate Take

This afternoon, my buddy the Carpetbagger suggested in the comments from the previous post, that if he had won the lottery, he would literally hire the actor that played the lawyer character on Seinfeld, Jackie Chiles, to be his spokesman, staying completely in character.

I can’t even begin to say how brilliant that idea is.  And it got me thinking of a whole other way to go with lottery winnings: using all that dough to pull off unbelievable stunts, just to mock everyone and everything, especially the media.

How cool would it be if I could find a way to keep my whereabouts unknown and just show up from time to time to do outrageous things, like a flash mob of one?  Like Bagger said, hire Jackie Chiles to be my spokesman.  (As far as I can tell (on Wikipedia), he’s still alive.)  I could hold press conferences to announce, among other things, that I’ll give $5000 to the first person that brings me a cheese omelet… right there while I’m speaking.

I could announce I’m funding my own presidential campaign and just go out there and rip on all the other candidates.  How liberating!  I could say shit that no one else would ever dare to say, like Harry Truman on crack.  Then if the other candidates take any kind of legal action, I sic Jackie Chiles on them.

I could hire Tina Fey to act as Sarah Palin and be my VP candidate.  (That’s one way to meet her!)  Actually, strike that… I’ll hire her to just sit there and talk to me.  Easiest million she’ll ever make.

I could show up for debates and demand that everyone refer to me as “Your Excellency.”  If they won’t do that, I’ll insist then that they call me by my given name, (stolen from the classic Monty Python “Election Night” sketch), Tarquin Fintim-limbim-limbim-wimbim-limbim-busstop-fatang-fatang-ole-biscuit-barrel.  And I won’t even show up… I’ll just have Jackie hold up a laptop with a live feed of me on it.

I could pay a guy with Tourette’s to record all my radio spots.

I would make a commercial, just to mess w/ the other candidates.  It would only be a 15-second spot… I’d have it run following every other campaign commercial and it would be Joe Pesci from My Cousin Vinnie, saying “Everything that guy just said is bullshit.  Thank you.”   (The remaining 10 seconds would show a long Chuck Lorre-esque vanity plate like he puts up at the end of his shows.  I’m the bluzdude and I approve this message n’at.

I could do commercials using nothing but internet cats, with graphics in “LolCat-speak,” extolling my virtues. 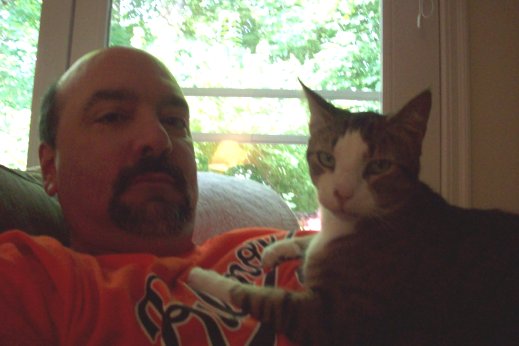 Unfortunately, I’d probably wind up with the dreaded “Producers” situation and win the election!  I guess I’d have to make sure that no one does anything to actually put me on the ballot.

Meanwhile, I keep feeding the internet celebrity “news” sites a steady stream of cellphone footage of what appears to be my downward spiral, featuring Tony Montana-sized piles of blow, Keith Richards-like blood replacement machines and Charlie Sheen-like paranoid rampages.  In fact, maybe I can hire Charlie Sheen to do them for me.

Eventually the very media that built me up will tear me back down as I go down in a paparazzi-fueled blaze of glory.  I can secretly hire Criss Angel or Penn Jillette to make me mysteriously disappear right in front of the press, thus enabling my return to a life of blissful anonymity.

Soooo many possibilities here… I tell you what… if I win the lottery a second time, I’m definitely doing it!
Posted by bluzdude at 6:13 PM

I'm so hoping you win the next mega-millions.

I would certainly be the country's most entertaining lottery winner.

Right off the bat, when the reporters ask what I'm doing to spent my loot on, I'll proclaim, "Drugs and whores! And Pop Tarts." [with big double thumbs-up]

Maire Antoinette said, "Let them eat cake." Eff that. If I win, I'm eating ALL the cake!

"wet fude" was easily the best part of all these shenanigans for me. I started thinking about how I should really stop expecting caviar and foie gras from my nice dinners and just judge them based on wetness. A 1 to 10 dryness to wetness scale.

You can make T-shirts: “Marie Antoinette is my home-girl.”

Then you can play some Mel Brooks-King Louie/History of the World chess, using real people. Naturally, you’d have to invoke the King’s Privilege: “My three moves to your one. Yes…”

Isn’t that how we differentiate cat food… wet food (in cans) vs dry food (in boxes or bags)?

I suppose I could have said “kand fude”. I’m kind of new to LolCat-speak.

I'm hoping you win it too. I have to say, it would be entertaining. I bet you and that guy who owns Virgin Media would become good buddies and get up to all kinds of rich shenanigans... and then you'd get your own reality t.v. show.

Me and Richard Branson would become good friends. He's been doing whatever the hell he wants and telling people to fuck off for years. I could learn a lot from him.

Hey! I got a cheese omelette with your name on it! :)
This was so funny...hiring a guy with tourettes...still giggling at that one!

I considered adding some sample dialogue for the Tourette's ad, but figured it would be better to leave it up to the imagination.

Plus, I don't need the anti-defamation lawsuits from the Tourette's Lobby.

...and now I'm kind of wondering why all political candidates don't campaign exclusively in LolCat-speak.

Totally running for Mayor of Shreveport on the Lol Ticket now.

I tell you, it's the idea of the decade. Lol-Politicians.

On the other hand, don't we kind of have that now?

"like Harry Truman on crack!" I can totally see you running for president, Bluz and speaking like that. If I won the lottery, I might even become a super pas just so I could see your campaign. :)