You may recall that Pinky works in a Seniors Center as an activities person.  Back in mid-February, she approached me to give a talk to her seniors and tell some of the stories about my Grandpa.  I’d recently run a couple of stories here about my Grandpa and his crazy family, thus giving Pinky the idea for me to come in.  The date she was holding open was Saturday afternoon, March 31, at 3pm.

Now, know this about me… I’m not a guy that seeks out the spotlight.  I’d rather write material for someone else than get up in front of people and do it myself.  So right off, I had to try to figure out how to get out of it.

After consulting the NHL schedule, I saw that the Penguins were NOT playing that afternoon, so they were no help to me at all.  So I tried to reason my way out of it.

“Why would your seniors want to hear a bunch of stories about some stranger’s relatives,” I asked.  “Why would they care?”

“They like to hear stories about the old days, plus, you’re new so they aren’t tired of listening to you,” Pinky responded.

I had to change tactics.  “But I haven’t given a speech or talk to a group since… well… since the mid 90s.  My speech-giving days are long past.”

“You’ll be fine, all you have to do is tell the stories like you told me.”

With that, she put me on the schedule.  Apparently I didn’t really have any choice in the matter.  Resigned to my fate, I began to ponder the up-sides.  It would be kind of fun to tell the stories to a group; in fact, it would be just like my Grandpa would do.  I would be channeling him, as a way of honoring him.  Yeah, I could pull this off.  Besides, if I suck, they’ll probably forget all about it within a day or two.

Telling the stories themselves would be no problem.  Hell, I’ve already told them all right here.  The one about my Great Grandpa sending his wife to Italy and then leaving her for a year, the one about her stuffing bits of rags into his annoying musical instrument, Grandpa’s brawling brothers handcuffing their parents together until they settled their argument, and the one about the one brother lugging the other up the stairs, but was in fact so drunk he didn’t realize he was carrying a rolled up carpet… all of those were in one post.  The story about my Grandpa smuggling booze into the Pacific Rim war zone by replacing maraschino cherry juice with bourbon was in this post.  So I basically already had my material all worked out.

But I didn’t want to tell them as nothing but a bunch of disjointed vignettes.  They had to make sense as a whole.  But that’s where being a writer paid off.  I approached it like I was telling one long story.  I just needed to connect them all the stories together.  So that’s what I worked on… devising the segues to bind it all together.  I had about 5 pages worth of notes typed out and that didn’t even include writing out the stories.  I certainly didn’t want to go out there and just read from the pages, so I went over it enough times so that the notes were just there for reference.  I did a rough timing rehearsal about a week out and on the morning of the event, did a full out practice run at home, for maximum freshness.  It timed out to about 20 minutes.  I even prepared a little “stunt” to liven up the part where my Grandpa was in the hospital, at the end.

Pinky had us set up in a large rec room, with couches and easy chairs in a semi-circle around the speaker’s chair.  I was hoping for a podium or something, so that my note pages would be less conspicuous, but I had to make do.

We ended up with a little over a dozen seniors, mostly women, maybe 3 men.  It was kind of funny, looking out at all of them, with their walkers sitting in front of them.

Once I was in the room, I knew that I had to shed any ambivalence I had about speaking.  One thing I remember from my college days (which included a great deal of public speaking) was that you had to keep your energy up and be fully engaged, if you wanted to capture your audience.  You had to commit.  I also knew that the opening would have to be strong if you wanted to draw them in… first impressions and all.  So I had a couple of jokes ready at the outset.

“When Pinky first told me that she wanted me to speak to you, my initial reaction was to say, ‘Why, did they do something wrong?’”

I totally ripped that from Modern Family.*  Luckily, it got a laugh.

“No, for years, she’s heard me talk about my Grandpa on my Mom’s side and tell stories about his life and his crazy family, and though that maybe you’d like to hear them too.  Just remember, if you don’t like the stories, it’s HER fault.”

Another laugh… phew.  Those two jokes were my canaries in the coalmine.  If they died, it would be a long, uncomfortable 20 minutes for me.  So I went on the stories and pretty much killed. 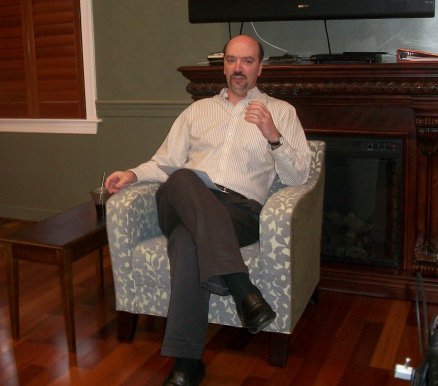 Channeling Grandpa and trying to make my notes look inconspicuous.

Right off the bat, I found one lady that was completely engaged in the stories.  I could see her following every plot point with the reactions on her face.  Naturally, I started to look her way most of the time.  She was on my left, so a number of times, I had to make a conscious effort to look back to the right.  Otherwise, I could have played to her the whole time. 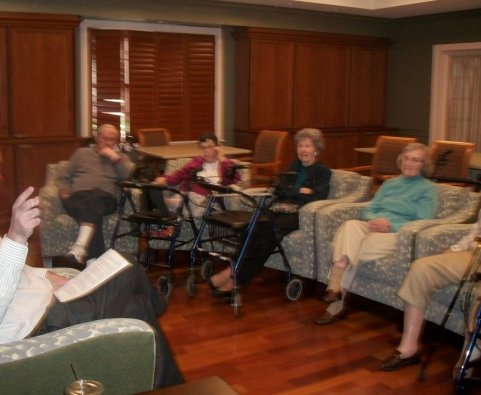 Lillian, the one in the dark outfit in the middle, was my Go-To Gal. 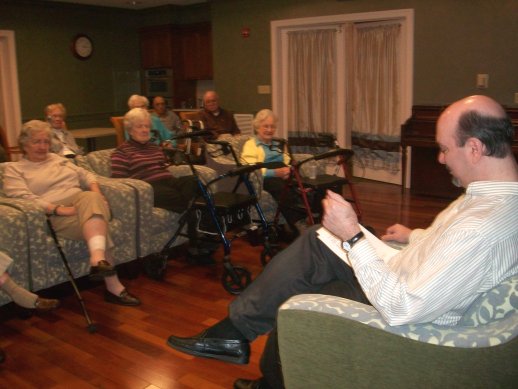 Really, I WASN’T reading my notes!  It just looks that way!

The whole thing went great.  I got laughs where I wanted and seemed to carry their attention throughout the presentation.  I heard later that they liked how I got up to demonstrate how my Great Uncle was hauling his brother (the carpet) up the stairs.

And even without seeing, I caught the laughs drawn by my “stunt,” when I was telling how Grandpa entertained the nurses assigned to give him his pills while in the hospital.  He’d take the pill cups and draw eyes on them, then put them over his own eyes and hold up a newspaper in front of them.  Then when they walked in, he’d drop the paper and… 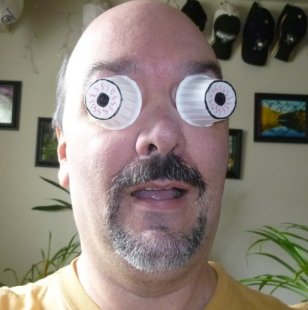 “Perhaps a little less caffeine, please.”  I probably should have tipped Pinky off about this bit so she could get a live picture, but I wanted to surprise her too.

So, I wrapped it up in 20, thanked the seniors for their attention and soaked up their warm applause.  Then Pinky threw it back to them, to ask about stories or memories of their own grandparents.  It was sad how many of them never knew their grandparents, because they had died so young.  Occupational hazard of being alive in the early 1900s, I guess.

I also took the opportunity to talk a little bit about my other Grandpa, who is still very much alive and rocking all of his 96 years.  I told them the story about how when my Dad got in trouble as a teenager for hopping on freight trains, Grandpa left his ass in jail until past midnight, when Grandma finally made him go get her son out of the town lockup.

It’s a shame to think that there are people that never had grandparents that could pass on family lore like this.  I am so lucky, in this respect.  I got to know all four of my grandparents and still have clear memories of each.

Anyway, the audience participation ran until everyone was talked out.  Many of them came by to tell me how much they enjoyed my stories, which touched me greatly.  They were all very sweet.

And the funny thing was that there was one guy in the crowd, on my far left, that barely moved a muscle the entire time; he just sat there with his chin in his hand, expressionless.  But afterwards, he came up and we ended up talking for another 20 minutes.  Seems we had lived in a number of the same places.  He even worked at the Chevy plant in Parma OH, right across the street from my apartment.

And he was a Browns fan and wanted to know if it was true about how the Steeler fans used to smuggle booze into the games.  That gave me the opportunity to talk about all our adventures at the Steelers/Browns games over the years, including our methods of illicit booze smuggling. 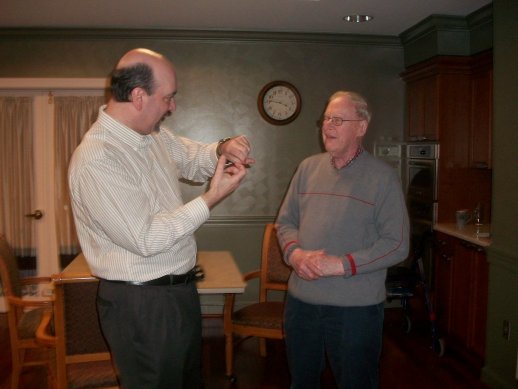 Demonstrating the use of “Bar-Noculars.”

All in all, it was a very good day.

And somewhere, I’m sure my Grandpa was smiling and I hope, very proud.

Director’s DVD Commentary: The Modern Family joke came from when Phil and Claire were at the theater about to see a cheesy monster B-movie, but instead felt they needed to attend a subtitled French film, so to not seem dumb to the daughter’s classmate’s very educated parents.