Sometimes I get to do interesting things at work.  Like today, I got to write up the procedures for our new Lactation Room.

No, I didn't write about what to do in the room… that would have been REALLY interesting.  I had to write up how to secure use of the room and schedule a recurring time.

I’m actually kind of pleased that my company has something like this.  We didn't used to.  I know when my sister-in-law worked there and then had my nephew, she had to use a pump in one of the women’s rest rooms.  Women would go in there to pee and be like, “Damn, what’s that buzzing?  What the hell’s she doing in there?  Oh, HELL no…”

Shortly after that, our first room was set up, but it really wasn't more than a closet with a table and chair.  That was it.  Harry Potter’s first bedroom was bigger.

Anyway, our company was moving off the floor that held the old Lactation Room, so they had to set up another one.  This time, they’re using a converted kitchen, so there’s also a sink and a refrigerator.  Heaven knows you don’t want to store the output in the common area refrigerators.  That’s just begging for a tragic-comic misunderstanding. 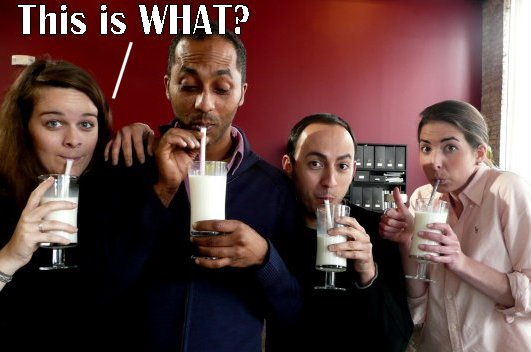 I had the woman who is in charge of the room show it to me.  I’m a “Method Writer,” so I needed to experience the space before I could properly render the needed directions.  Even after the upgrade, it was still kind of “Spartan.”  It had all the charm of a hospital cafeteria.

I suggested they get some gauzy drapes and pillows and rocking chairs and stuff… something to soften the vibe.  [Snork!]  Have something to hold up a book or magazine, so they only have to use one hand to turn the page.

I don’t see it happening though… I don’t think the Powers That Be really want anymore workday down time than absolutely necessary.  I know for a fact that they keep the restrooms several degrees colder than the rest of the floor, specifically to deter people from nesting in the stalls.  (It doesn't work… they just bring blankets.)

I also suggested a snappy nameplate for the outside of the door, but they wanted to go “subtle” instead.  I say, why be shy?  Promote the place as our effort to make the office friendly to working new mothers.  I had the greatest name for the room, too…

They never let me have any fun.

I also suggested that in the name of fair play, they also create a similar room for men.  Maybe we can’t use it for the identical purpose, but what if we had a place for men that were attempting in-vitro fertilization?  What if they needed a room where they could produce a “sample” at the opportune moment?

I see a room with some overstuffed easy chairs, a humidor with fresh cigars, some cold beverages and of course, a DVD player with a Hi-Def monitor.  We could call it: 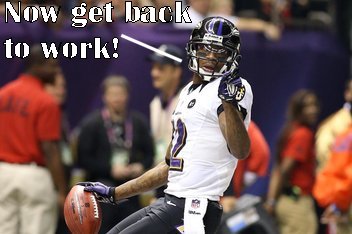 Director’s DVD Commentary: If you guessed that I only included the whole bit about the special room for men was so I could use the Super Bowl highlights joke, you’d be right.  And if you didn't guess that, it’s like you don’t know me at all.

This post is dedicated to all my blog sisters who have been there and done that, and especially Cassie, who should be popping #4 any time now.
Posted by bluzdude at 7:39 PM

When I was breast feeding, I also had to use the bathroom. And it always smelled like ass in there... And booze. Not from me tho. I'm classy...

Yeah, that would really suck. No one wants to spend any more time in a public restroom that is absolutely necessary, surrounded by someone else's "bouquet".

And a man can dream, can't he? Huzzah! (People don't say that enough.)

Your Niece or as I call her Lactoborg would say My BooB my KID YOUR Opinion don't matter ........

Her uncle is trying to help all womankind... if she doesn't want my help, she can take HER BOOB into a smelly public restroom.

Other names for the room:

But I did want to see Bluz recreating the Got Milk ad for this one.

I always had to use our locker room where pretty much anyone has access. They told me that since we didn't have a 'stationed' lactation room, I'd have to use an empty patient room on a different floor and after I was done, housekeeping would have to completely clean the room.

Because I like housekeeping and I don't want them hating me, I resorted to the locker room where people would walk in, go "Oh, I'm SO SORRY," and then walk out. I was always covered, but I still looked like a dang cow.

Just put a sign outside the door that says, "MOOOOOOO."

I was very fortunate with both of my children to have an office with a door that closed. No lock, but I would just put a sign on the door that said DO NOT DISTURB, and most people knew what I was doing and left it alone. If I was in court for the day, it was a pain, because there is NOWHERE down there to pump, and I would have to run back to the office every time. PITA!

I applaud your employ's attempts to create an appropriate space. And it doesn't have to be fancy or pretty. Mostly, people just play on their phone while they are pumping anyway, so the setting is unimportant.

We had an office with a locking door for this function after I had Grace. They actually created the room for me, and it remained the lactation room for a while. Even though that door locked, it always felt really weird to pop a boob out in the office.

Sorry, not gonna happen. Can’t have any mess in the ‘stache.

Also, how about The Milk Wagon?

You would think a hospital would be more sensitive to the situation.

Still no baby? Maybe your thighs and abs are so tight from all the exercise, you have the little one clamped in place.

Only the upper crust here get offices; the rest of us are in cube farms, so very few would have that kind of benefit.

Maybe it’s just me… I prefer to be surrounded by pretty things. Obviously, what I consider “pretty” might differ greatly from what you do. (Like commemorative Super Bowl Terrible Towels.)

I felt like that every time I changed my clothes in my old cube (where I was on the end of a dead-end aisle.) Like a Renegade!

Yes, we used to have a lactation room, then they turned it into our accountant's office. If I wanted to, I could ask security to open up my boss's office for privacy, but my boss isn't very nice so ... I suffer.

You should leave a squirt in your boss's coffee. Don't mess with Nurse Pain!

Sounds dirty, but such a thing could significantly increase productivity. I would just feel sorry for the janitor :P
Sports reels would work, but so would "world's greatest police chases" or anything else that acts a mental testosterone IV

Janitor should be OK... There's a paper towel holder in there. Wipe n shine...

"Spankateria." Sounds like an SNL bit. Somehow, I'm picturing Tina Fey wearing a nurse's uniform and carrying a clipboard and plastic vial. I'll let you come up with the rest.

Not meant as in YOUR opinion but anyone that tried to tell her to be more Discrete she would tell them to put a sheet over there head and eat and enjoy your meal !!!!! She was like the commercial "Hello up here" kids eating get over it ..... Was proud but can see both sides of how uncomfortable it is but yet anyone else has no say in this matter .....Bottom line to me IF you want to Breast Feed in PUBLIC good for you but don't think that's how everyone feels and GET over it !!!!

I think people need to chill the eff out about kids getting breast-fed. Mothers are usually pretty discrete about it. If it offends, don't look, and mind your own business. I'm w/ Baby Girl on that one.

Mmmmmmm... Tina Fey in a nurse's uniform. I may be busy for a while...

How about "GOT ANY COOKIES WITH THAT!"When a friend of Grandma's asked about my new motherhood, she said of my nursing, 'O I didn't know anyone did that anymore!"
My question, "When did they STOP!"
I wish you and all the mothers rockers, soft pillows and aseptic surroundings.

I want the best for ALL my mother-rockers.

When I went back to work after Sarah, I learned that legally they have to provide a safe and clean place to let me pump that is not a restroom. Fortunately, I have my own office so I just closed the door and brought my Kindle (only one hand needed!)

And I think your idea for the men's fertility room would kind of defeat the purpose of work productivity. And do you get individual stalls? That would just be plain weird.

No stalls, we would require the whole room. Thats why they're key-access only.