I've told the story before about how my dad got tossed in the town jail as a young boy, for hopping on freight trains.  His dad was going to leave him there until Grandma intervened.

I also have a train story, but mine isn’t nearly as warm and uplifting.  I almost derailed a train once.  I was in grade school, so I’m pretty sure the statute of limitations has expired.  Here’s how it happened.

When I was in 3rd and 4th grade, we lived in Glen Ellyn, IL, a suburb west of Chicago.  On my daily walk to school, I had to cross a set of train tracks in town, near a commuter train stop.  (I bet Carpetbagger knows exactly where I’m talking about.)

Getting to see trains go by up close was a big thrill for me, so I used to do whatever was necessary to ensure I’d be at the tracks at the time the train was due.  For example, I knew that a train was due in at a particular time, so I’d time it so that I’d just be getting to the crossing when the train arrived.  If I was early, and I could tell because there was a big clock tower in the middle of town, I’d start to dawdle and shuffle slowly along.

There was no sense hurrying… getting to school early just meant I’d have to sit through more of Daily Mass.  I’d much rather see, feel and hear the train come whooshing by, as I stood by the no-crossing arm that lowered to block the road and sidewalk.

Sometimes, if there weren't any grownups around, I’d grab onto the arm and ride it as it rose back up.  (Not all the way; I’d jump off once I was two or three feet off the ground.)  Other times I’d put a coin on the tracks so the train would smash it.  I usually used pennies or nickels… quarters and dimes could be used for candy at the drug store, so I didn’t waste those.  The train seemed so powerful to smash the pennies the way it did.  I figured the train would be able to smash just about anything. 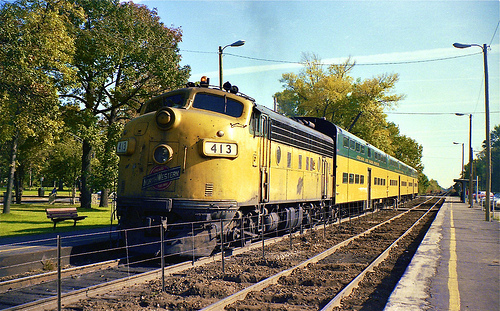 Coming home was another story, because there seemed to be fewer trains going by in the middle of the afternoon.  So I began taking a shortcut home, bypassing the main business street with the train crossing, clock tower and local stores.  Instead I’d cut through some back lots and open fields, and cross the tracks out in the open where there were no cross streets.  There was no little fence between the tracks, like you see in the picture above.

I know it seems dangerous now, but frankly, I don’t see how a pedestrian EVER gets hit by a train.  It’s not like they sneak up on you quietly.  You can see and hear them coming from a mile away, as well as feel the tracks vibrating.  Just take a step or two off the tracks and you’re good.  Even as a kid, I knew not to linger on the tracks.  However playing around them was still great fun.

Coming home one afternoon, when I was probably in 4th grade, I found this big hunk of iron.  It was a long bar with flat sides, probably a half-inch thick, with a big “notch” on one end.  It looked like this: 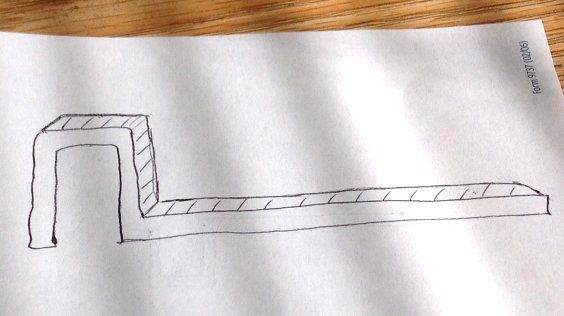 Please excuse my poorly drawn rendering.  And forgive me for forgetting to draw in the underside of the bar for depth, at the far left.  (I didn’t want to take another picture.)  But you get the idea.

Recalling what the trains did to coins, I thought it would be cool to let the train smash the iron bar.  The notch at the end fit perfectly over the rail; all I had to do was put it in place and wait for a train.

Before too long, here one came.  I backed away by about 20 feet, to make sure I didn't get hit with any smashed iron.  Then the train hit the iron bar.  Really never considered that the iron might not smash.  Instead it was the train that got jolted and rocked waaaaay up on one side.  I don’t remember if the wheels actually came up off the track, but it sure seemed that way, from the severe tilt of the cars.  If the wheels weren't up, that train must have had a hell of a lot of give in the suspension.

Fortunately, the train came back down squarely and continued churning into town.  Immediately, a grownup appeared out of nowhere, yelling and running toward me.  I did what any kid would do… I got the fuck out of there and ran home as fast as my little legs could go.  No grownup catches a scared kid running through back lots and alleys.

Days later, I went back to look for my notched piece of iron, but never found it.  I suspect the grownup took it so no other dumbass kid would derail the train.  Lucky for me, the only damage was to the passengers’ clothing from all the spilled coffee on the train.  I’m pretty sure there was no damage to that iron bar.

Suffice to say, I never put anything on the tracks again.  One barely averted public disaster was enough for this little bluzdude.
Posted by bluzdude at 2:53 PM

"RUN AWAY! RUN AWAY!" Good thing you did or I would have given you a hard smack.
What other mayhem has the statute of limitations run out upon?

That's exactly what I did. Running away is the #1 solution to most any kid problem.

I don't think I have any other stories of mayhem and destruction that I haven't already shared.

Ground him next time he visits Mrs N. no Jack the 1st day you Hoodlum .....

The Wild Rumpus continues.Won't do much good, Reeeek. He'll sniff the sauce and be right there.

Got money says anything over 100 yards and Mr.N has you I have serious doubts about your CARDIO stamina !!!! Or mine for that matter ....

You have a point there. He may go slowly, but he can go all day. I’d better plan my escape for when Law and Order is on.

Somehow, I picture you doing the same thing today. But not running away quite fast enough...

Nope, I long ago gave up wanton destruction of public transportation. .. Unless I get to use explosives.

Is it weird that I wanna try this!?

I think it’s weird that you haven’t already. I recommend you stick to coins, though. You’re old enough that they’ll bring charges. Lord knows what they’ll make of all the mannequin body parts laying around your house.

You little terrorist. If that train had derailed, 20 feet wouldn't have saved you.

God, that photo takes me back. That's what the Chicago Northwestern looked like when my Dad commuted every day. Today it's called Metra and all the cars are silver. Love the old green and yellow, even if it was Packer colors. We didn't associate that.

That’s why I picked that shot… that’s how I remember the trains; giant green and gold monstrosities (that were there solely for my entertainment.)

I knew you would remember… In fact, had the worst happened, you probably would have heard and passed on the Legend of that Idiot Kid Who Derailed a Train (and then had it fall on him.)

My grandparents lived in Glen Ellyn for awhile. I remember riding bikes into town and getting ice cream at Inga's and if I remember correctly, it was just past the tracks. Although, that has been over 20 years ago so I may be a little fuzzy.

Glen Ellyn had the nicest little downtown area, but I don't remember much but Heinz Drug Store, which was Candy Central for me. Everything else was just grown up stores.