No, that is not the alternate title for the preceding post.  Ahem…

Two weekends ago, I used a coupon offer from Omaha Steaks to get a decent price on an assortment of burgers, steaks and other goodies.  Nothing says happiness like a freezer full of meat. 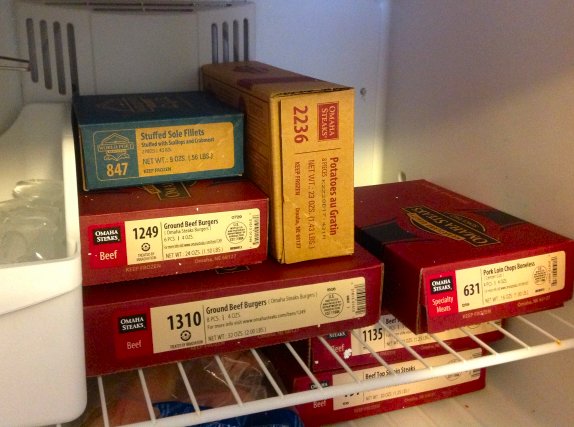 If you've ever had Omaha Steaks, or Kansas City Steaks, they’re pretty darn good.  The only down side? 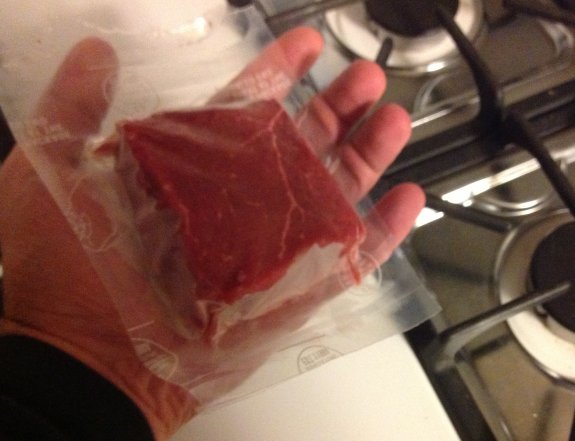 One is probably a nice, reasonable serving, but when I go ‘meat,’ I tend to go big.  (Ahem.)  Two of these are about right for me, but I’m going to try to make these last and only have them one at a time.

In addition to a cookbook and a knife set, this package also came with several “Conversation Cards.”  They’re apparently designed to get things going at that fabulous dinner party you've been planning for ages. 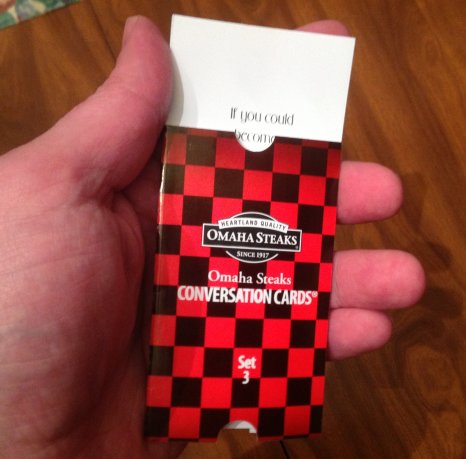 But if you ask me, if you need Conversation Cards to get the good times rolling at your own party, you need to invite a higher caliber of guest.

So as a party gimmick, the cards are a fail.  But as blog fodder, it’s all ‘win.’  Tonight, I thought I’d run through a couple of these and see where I end up.  What, the title made you think I was questioning my carnivorous ways?  [snicker…]  As if…

Where is the most beautiful place you've ever been?
For pure, sheer beauty, hands down it’s Carmel California.  Between the gnarled Cyprus trees and the individually named, one-of-a-kind houses, it’s the most peaceful, tranquil and stone cold beautiful place I’ve ever been. 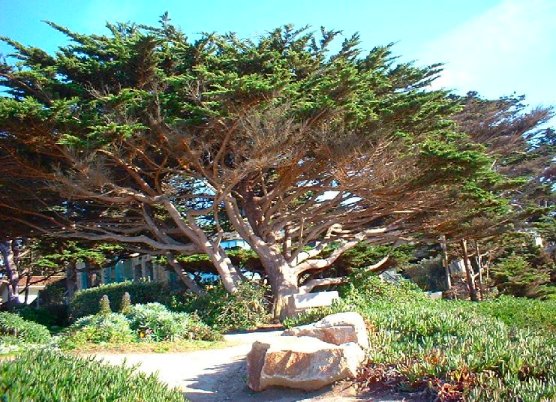 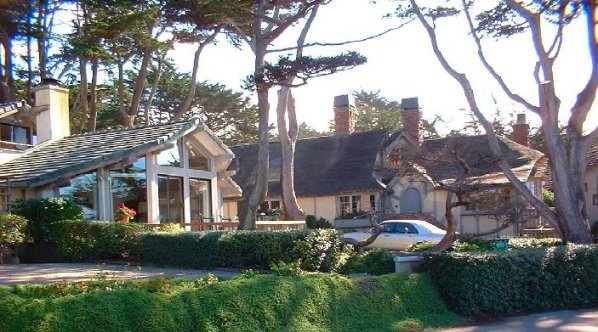 One of the zillion-dollar homes in Carmel, that faces the ocean. 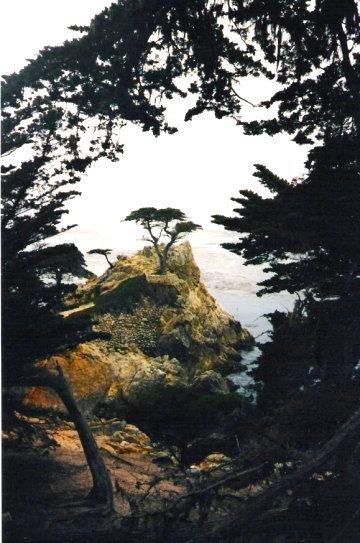 This is the famous Lone Cypress, as seen from Seventeen Mile Drive between Carmel and Monterrey.  This was probably the first really good, artful picture I ever took.

But other than Carmel?  I have to say good old dahntahn Pittsburgh PA.  With the gleaming new buildings, the ornate old buildings, the rivers, bridges and mountains, it’s the most picturesque city east of San Francisco. 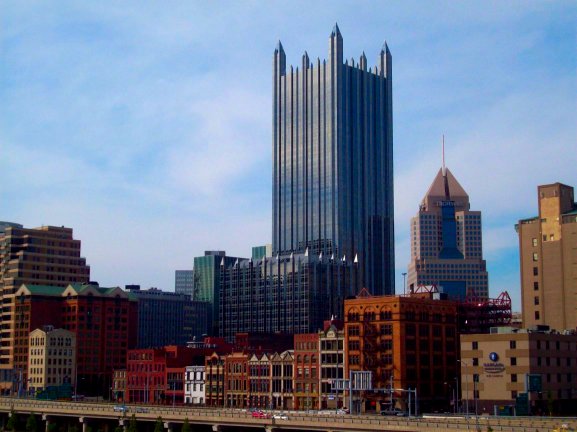 It just reeks of "Champion."

I wrote all about it here, but in a nutshell, I had a precognitive dream one spring when I was in junior high.  We were about to move 200 miles away and I had a dream about being in my new school, in a strange new classroom.  Then the next fall, in the middle of Physiology class, (a subject I’d never heard of before), I had a dream flash that played out for about 5-7 seconds, exactly as I’d seen it in my dream.  Everything was the same, from my perspective in the room, to the classroom design, to the girl that was handing out M&Ms.

There’s no possible way I could have known any of that, but yet, there it was, spat out of my subconscious six months earlier.  So as much as I consider myself to be a man of science, I always have that nagging thought that not everything can be explained.  Was it the aliens?  Was it God?  Was it just another quirk of Mother Nature?  I have no idea.  But it makes me wonder what other impossible things can happen.

If you had a chance to become famous, would you want to?
It would depend on what I’d be famous for.  I’d like to be famous the way The Bloggess is famous.  She has thousands of followers that read everything she does, she gets to do cool things like book tours, but yet she can still go to the store without causing a riot, or being harassed by the paparazzi.

(You know what would be good paparazzi deterrent?  Getting a tattoo of a middle finger on your face.  They’d never be able to run the shot.  OK, perhaps it should be a “temporary tattoo,” in case you ever want to be presentable or something.)

If you were in total solitude for one year, how would you spend your time?
Writing!  I’d take that opportunity to compile my memoirs, or write some fabulous story.  How else am I going to achieve that level of semi-fame like The Bloggess?

If you could live at any period of time, except the present, when would it be?
I’d go back to the 70’s stating around 1972, because music would still rock, the Pirates would be relevant and the Steelers would be about to win 4 Super Bowls in 6 years.  The draft would be over, gas would be cheap, politicians would still cooperate (to some degree), and AIDs wouldn't be invented yet.  Shorts were actually short, girls wore bell bottoms and teardrop glasses, Monty Python were in their prime, and kids could still go outside and play without pre-arrangements or supervision.

Sure, there would be down-sides, like rotary-dial telephones, 4 TV channels to choose from and no Internet, but any era has its ups and downs.

What would be different about the world if there were no birds?
Cars would be cleaner and PittGirl would have one less nemesis to write about.  Cats would kill more rodents.  Also, no Ratbirds!  Baltimore’s football team would be called something else, to reflect the local ethos.  Like maybe, the Baltimore STDs…

If you could become a super-hero, what would you want your super-power to be?
I would be ArguMan!  I would be able win any verbal disagreement or talk my way out of any predicament.  I’d be able to talk my way out of a ticket, my date out of her underwear, or the local pub into providing a round on the house.

What historical figure do you feel is the most like you?
I don’t know… is there someone of historic significance who is utterly unknown and ordinary?  OK, I do know.  How about the first guy to add the word “this” to a prior statement?  As in, “Hey, chop this…” or “bite this…” or “put this in your pipe and smoke it…”

Side Note: This was too good not to share.  I was graced with another brilliant example of Spam Comment Blather and I thought you’d appreciate.

“What a data of un-ambiguity and preserveness of valuable experience about unpredicted emotions.”

Gotta love it.
Posted by bluzdude at 7:22 PM