Have I ever mentioned that I tend to keep everything?  It’s amazing how much crap I have stored in my small 2-bedroom apartment.  I mean, you wouldn't necessarily know it just by coming in, because we keep things presentable, but if you were to poke around?  Hoo-boy.

Sometimes I just re-purpose things.  Like my old 1997-era word processor, that’s been boxed up since the late 90s?  It’s a table now.  Once upon a time, I needed something to put stuff on, so I threw a tapestry over top of it and voila!  A place for my crap. 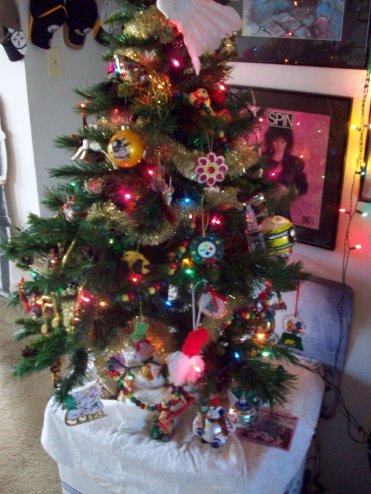 The Christmas tree is on top of the box-table.

See, back when I escaped from the Ex in 1997, I felt the need to start writing again.  The problem was that I didn't know the first thing about computers and had never even seen a Windows screen or the Internet.  So I bought this word processor, which was basically a typewriter with a CRT-screen. 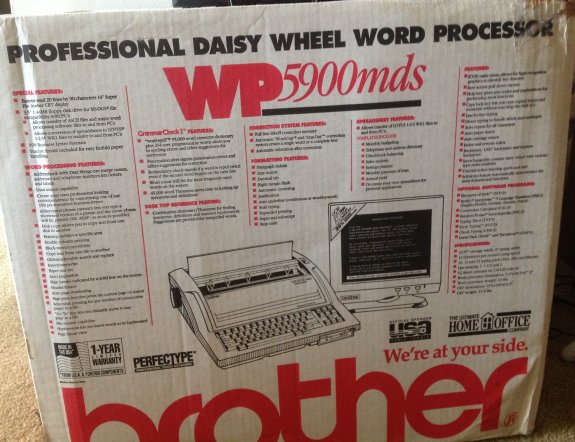 The unit had zero memory; you had to save all your work to floppy disks.  But you could write and edit on-screen, which was just a huge benefit for me.  You could also do rudimentary spreadsheets.  Then you’d press

I used it for a couple of years, until after I started working at my present job, and learned how to use a Windows-based PC with a mouse.  When I bought my first PC in 1999, the old word processor became expendable.  And a table.

Pinky finally got tired of the thing being in the way and decided we needed to get rid of it.  Not wanting to clutter up a landfill with it, I wanted it donated or recycled.  I was really leaning toward “recycled,” because I couldn't imagine a situation where a charitable organization would be able to use this thing.  I mean, I've read that they won’t even take Windows 98 PCs any more.  Just to be a hell of a guy, I included a handful of unused floppy disks.

Somehow, though, Pinky managed to get the Salvation Army to come out and pick it up, along with an old spare VCR I have.  (She was sick of looking at that too.)  I think what she told them on the phone was that I had a computer and a DVR.  She scheduled them to come out last Saturday, sometime between 10 and 3.  Or maybe she told them about the floppy disks.

Since they were making the trip, I figured I might as well go through my clothes as well.  Heaven knows I could use some room in my closets.  So I put on my miner’s helmet and ventured into the depths of my closets, in search of donation-worthy clothing.

The stuff I pulled out generally fell into two categories:

1)  Stuff that was so ugly I will never, ever wear it again.  Example: this sweatsuit combo. 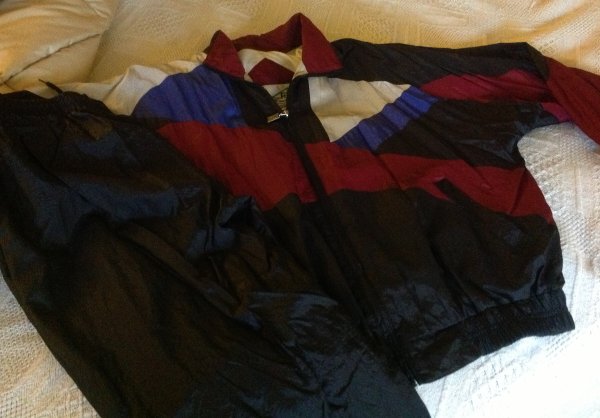 Back around 1987 or so, my luggage was stolen from the carousel when I was coming back to Cleveland from my parents’ place, and one of the items I lost was my favorite sweatsuit.  I think someone got me this monstrosity as a replacement, and I might have only worn it once or twice, ever.  And even so, I still had the fucking thing in my closet.  I tried it on, just for shits and giggles, and it still fit.  (It had a LOT of elastic.)  For a moment, I thought to myself, “How can I throw this out?  I can still wear it around the house.”

Then I moved, like, a millimeter, and I remembered why I never wore it.  It was made out of “parachute pants” material, so every time I moved, it would sound like I’m wearing wax paper.  The people upstairs would be able to hear me moving around the room, like someone was sanding the floor.

2) Stuff that I can no longer cram myself into and am unlikely to ever again.  Example: my Steelers Zubaz pants. 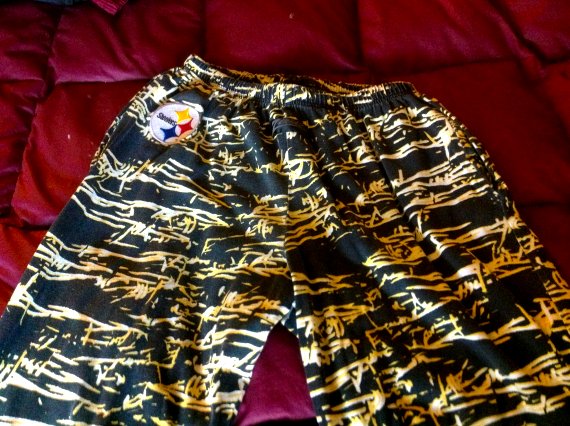 Then last year, while the Steelers were in a losing streak, I though maybe I’d give them a try, and work on some “Reverse Mojo.”  Problem was that I could barely get them up one leg, let alone over my big ass.  So, out with the Zubaz.

All told, I assembled four garbage bags worth of clothing to donate.  (They were folded, too, for space-saving reasons, not just wadded up.) 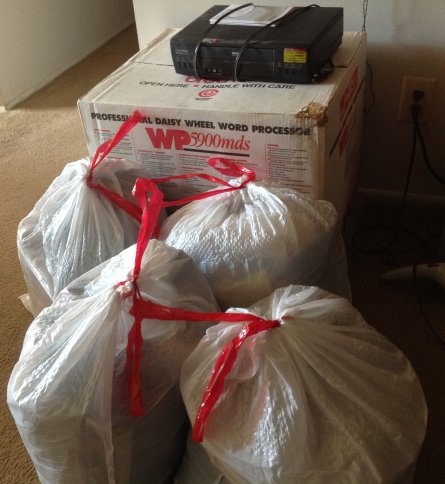 It would have been even more, but I still have a wardrobe moving box full of stuff buried in Pinky’s room.  I haven’t opened that box for years now.  Another couple of years, and I can use it as a fashion time capsule… “What NOT to Wear: The 1998 Edition!”

So after all that fuss, and looking out the window for the Salvation Army truck, they ended up calling me around a quarter to three, to say they couldn't come that day.  I rescheduled for Thursday, but I’m still pretty irritated about it.  Just for that, I should include my “Heathen” tee shirt, just to show that I am beyond Salvation.

And I’ll have to make sure they know I have a strict No Returns policy.
Posted by bluzdude at 7:03 PM

Email ThisBlogThis!Share to TwitterShare to FacebookShare to Pinterest
Labels: Bluz LIfe, Pittsburgh Steelers, Things That Piss Me Off