I ended up going to two Orioles games this week.  I don’t usually like to cram them all together like that, during a very long season, but as often happens, it just ended up that way.

On Wednesday, I had Misty’s tickets again, so that was a known commodity.  But they were having a game jersey giveaway on Saturday; the only one of the season.  I've been to a lot of giveaway games, for hats, t-shirts, coolers and whatnot, but I've never been to a jersey game.  And you know me and game jerseys…

The “prize” was an (2013 All-Star) Adam Jones road jersey.  I have Orioles jerseys in home white, and in black, and orange, but I don’t have a gray road jersey.  Gotta complete the collection, right?

The promotional announcements said “replica” jersey.  I know that in jersey lingo, a “replica” is a jersey with the numbers ironed on, with the inner stitching drawn on, instead of actually stitched.  I don’t really care for them, because they look phony to me.  BUT, this one was going to be free, so what the hell?  All I had to do was be one of the first 15 or 20 thousand people to enter.  (I saw both figures in different ads, so I couldn't be sure.)

My plan of attack was simple.  It was a 4:00 game and they usually start letting people in an hour and a half before game time, which in this case meant 2:30.  I figured I’d get there around 1:30 and meet up with Sitcom Kelly.  That would give us time to grab some food from the outdoor vendors, and down a couple of beers before the doors opened.  And if there was a big lineup, we could hit the line right off the bat.

I had a feeling this game would be packed when I bought my tickets last week.  There were only a couple of sections that even had seats available, which is rare.  I got seats in the third row of the upper deck, down by the left field foul pole.  The question was, what time would everyone show up?

I got my answer as soon as I got within site of The Yard.  The place was mobbed!  The courtyard at the main entrance was packed, and there was a line clear around the corner and down the length of the place.

I decided to check the side entrance, across from the bars and vendors where I always go before games.  The line there was much more manageable, no more than about 20 yards.  I dashed over to the food stands and got a burger and a sausage, then jumped into the line.  My food run cost me about 10 yards of line.

People seemed to be concerned about the number of boxes of jersey’s they’d seen at the door.  I was thinking that if I just miss out, then I just had a really costly meal.   This was the line in front of me:
There was also a line coming from the other direction.  That was the line Sitcom Kelly found herself in.  We decided it would be best if she stayed put.  She was about as far away as I was, and I was worried about people squawking about line jumpers if she joined me.  And getting in line behind me was no treat either:
I’m glad I came in with a contingency plan for such a crowd.  After all, one of my personal axioms is “Never underestimate what people will do for free shit.”  They had a huge crowd the night before, too, because they were giving away floppy hats.  Now, the previous three games against the Texas Rangers, who are division leaders?  The crowds were between 19-21 thousand.  But there were no giveaways.

I was kinda lucky in one respect.  My spot in line ended up being under a tree, so I had some shade.  The downside was that I had about an hour to kill, and no one to talk to.  But lo and behold, the Orioles let people in a half hour early, no doubt due to the crowd, and how long it take to process that many people all at once.

So, I got my jersey… which was a complete piece of shit!  The letters and numbers were silk-screened on!  I hate that.  I don’t know why I was surprised; I should have known that they’d be completely on the cheap.  But then, they shouldn't have used the term, “replica,” which is specific. 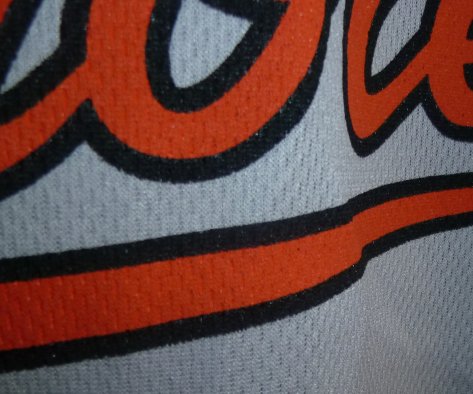 On the bright side, it fits Pinky perfectly, so it’s hers now.  She doesn't give a shit about authentic versus replica; she just looks cute in it.  Me, I have a jersey reputation to uphold.

I met up with Sitcom Kelly shortly afterwards and she got her jersey too.  Now all we had to do was kill two freakin’ hours before game time.  I got some beer, (finally) and we wandered around, managing to kill about half the time.  Eventually we decided to go sit down up near our seats.

I say “near” because the sun was still hitting our seats up in the third row.  I knew by game time, we’d be shaded, but that didn't help right then.

Anyway, as we approached our section, the usher asked to see out tickets.  I was dumbfounded.  Why the hell did she need to see our tickets in the upper freakin’ deck?  Do they really have a problem with people sneaking from the lower bowl up into the nosebleed sections?  WTF?  That bugged the hell out of me right off, and it only got worse when the chased us out of some seats in the back of the section, in the shade.  (That’s why I always try to avoid showing my ticket to the ushers.  The less they know, the more flexibility I have.)

So we killed the time in our sunny seats, which luckily for us, found some occasional cloud cover, and we were indeed shaded by the first pitch.
For all the personal irritations, it is kind of fun to see the place all filled up.  You could see single sections all filled up with particular groups, who usually wore matching shirts.
Biggest downer of the day was the loudmouthed doofus sitting directly behind me, who spent the entire game screaming things at the players and umpires.  Why do I always end up in front of these clowns?  And this wasn't some kid; this was a grown-ass man, who was at least in his late 40s.  Do you know how ridiculous that is?  I mean, look at our view: 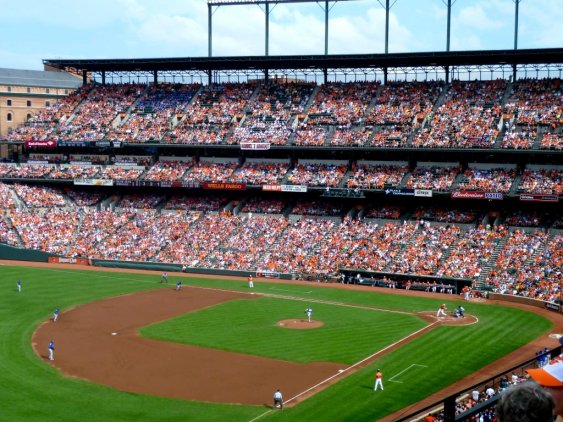 I totally wanted to stand up and say, “Dude, do you seriously think you can argue balls and strikes from a side angle 8 miles away?  Do you really have a better view, AND a better understanding of the game than the trained professional umpire standing 3 feet behind the action?  And do you really thing the players A) can hear you and B) give a rat’s ass what you have to say?  You are not impressing anyone up here with your enthusiasm or baseball “expertise.”  All you’re doing is making me deaf in my right ear.  So unless everyone is cheering because something happened, please sit down and shut the fuck up before I toss your ass over the railing.  Thank you.”

[Pause to soak in the applause from the rest of the section.]

In actuality, all I really did was give him a badass glare when I handed his sunglasses back to him after he dropped them in my lap.

When we could hear ourselves think, Sitcom Kelly and I had a giggle when they changed pitchers and announced “The Call to the Bullpen.”  Thinking back to the post I wrote about Sitcom Kelly hypothetically running amok around the ballpark and getting into trouble by chatting with the manager on the bullpen phone, I proposed the following bullpen voicemail message:

I realize that I’m sitting here bitching about getting to spend and entire day eating and drinking and watching a ballgame, without a care in the world, while other people are either working or tending to a houseful of kids or working on some kind of home renovation project.  I acknowledge that I’m very lucky in that respect.  I suppose I could have written about the game I went to on Wednesday, where nothing went wrong and I had a splendid time.  But that’s boring and it’s just so much more fun to bitch…
Posted by bluzdude at 12:50 PM

Email ThisBlogThis!Share to TwitterShare to FacebookShare to Pinterest
Labels: Baltimore Orioles, Bluz LIfe, Morons on Parade, Sitcom Kelly, Things That Piss Me Off